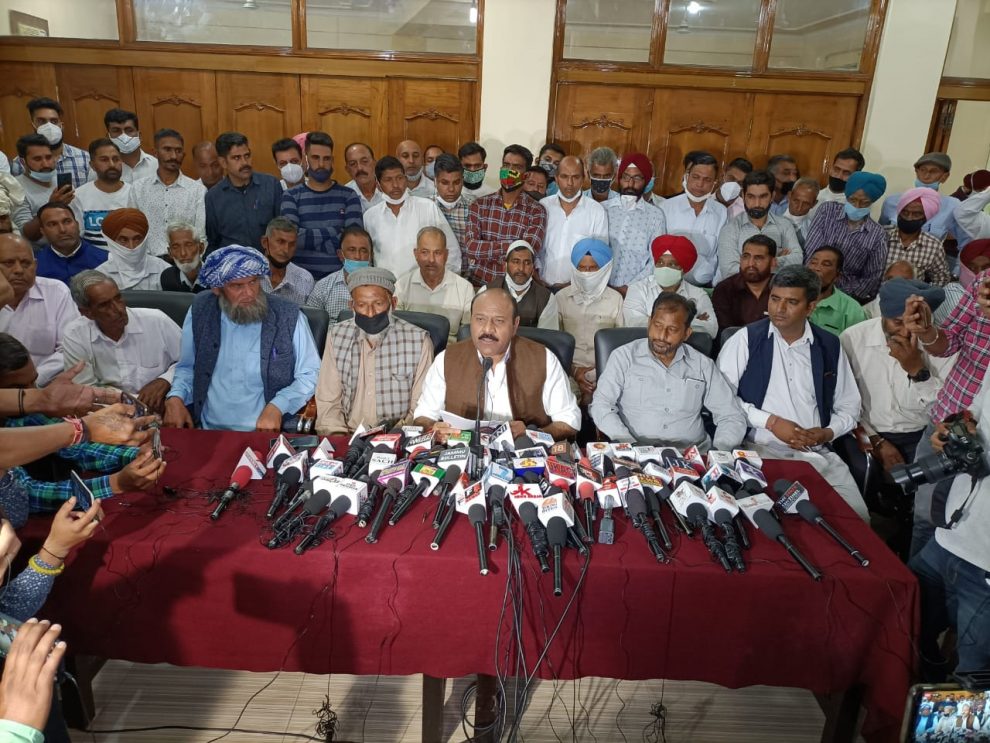 With heavy heart, I am writing this resignation letter to you as I have no option but to quit the party which has, unfortunately, been hijacked by the unscrupulous elements with mysterious character. Unfortunately, the Peoples’ Democratic Party (PDP), which had earned trust and faith of the people of all regions and sub-regions of J&K under the visionary leadership of late Mufti Mohammad Sayeed, now has turned into a party of drawing room politicians, who have no communications with people at grass-root level.

You are very much aware that I remained associated with the party through every thick and thin, since its formation to carry forward the visionary and pro-people agenda of late Mufti Sayeed.

The one and the only mission of late Mufti Sayeed to form the PDP was to provide a viable and secular alternative in the erstwhile state of J&K to represent regional aspirations of the people.

It was the desire of Mufti Sahib to establish a lasting and sustainable peace in J&K by removing alienation among all alienated sections of the society, especially the youth.

During his two tenures of Chief Minister Mufti Sayeed had proved how to strike a balance among different regions and how to treat all communities equally. As late Mufti Sahib had set an example of good governance, his first tenure as Chief Minister of J&K is still considered as the ‘Golden Era’ in the political history of J&K.

It was during this Golden Era, every section of the society tasted good governance. To channelize energy of the educated unemployed youth, Mufti Sahib had created job opportunities for youth by launching schemes like Rahbara-e-Talim, Rahbara-e-Sahit, Rahbara-e-Zehrat, Rahbara-e-Khail etc. Apart from creating Self-Help Groups, he appointed a large number of youth as daily wagers in various departments to provide them employment.

On the one hand, Mufti Sahib had brought accountability and transparency in the administration to deliver a corruption free governance, he also had convinced the then Atal Behari Vajpayee led NDA government at the Centre to take Confidence Building Measures (CMBs) to ensure lasting peace on the borders. Opening of Uri-Muzaffarabad and Poonch-Rawlakot roads on the LoC were the result of the peace initiatives of late Mufti Mohammad Sayeed.

It was during Vajpayee’s government at the Centre and Mufti Sahib’s regime in J&K that there was complete peace and normalcy on the borders –from Kathua to Kargil and people lived a peaceful life without fear and panic.

Unfortunately, after the demise of Mufti Mohammad Sayeed, PDP is virtually hijacked by those having no connection with the public. The leaders, having direct contact with the masses, were ignored as a coterie- comprising drawing room politicians, land mafia and land grabbers, has completely taken control of the party.

Being a dedicated member of the PDP, I repeatedly suggested party leadership to stick to Mufti Sahib’s visionary and secular agenda by sidelining such elements but to no avail. My suggestions were not taken seriously by the leadership because drawing room politicians never allowed you to listen to genuine mass base leaders.

At the time of the unfortunate demise of late Mufti Mohammad Sayeed, PDP had five MPs (three Lok Sabha, two Rajya Sabha members) 28 MLAs and 14 MLCs in its kitty. Through his leadership quality and your hard work, there was a strong grass-root level organization structure of the party at that time.

Unfortunate within four-year after demise of Mufti Sahib, the PDP is facing existence identity crises and existence of the party is under threat as all senior leaders have quitted the party due to this coterie.

Instead of realizing why leaders, who remained associated with the party at crucial times, are quitting the PDP, this coterie kept you in the dark by not allowing you to listen to such leaders. A false narrative is created within the party that most of the leaders have quitted PDP due to pressure from the central agency. This narrative is far from the reality because leaders have resigned from the party when their view points were not listened to and they were repeatedly ignored in the decision and policy making process.

After the whole leadership of Kashmir Valley was detained or arrested post-August 5, 2019 situation, the so-called senior leaders and self-styled founders of PDP in Jammu region, mysteriously disassociated themselves from the day today activities of the party due to fear of central agencies and to hide their misdeeds, especially land and other illegal business.

Instead of recognizing my work to reactivate the party in Jammu region, I was completely ignored and sidelined while restructuring the party in this region after your election as PDP chief.  Those who have virtually deserted PDP after August 5, 2019, were given important positions in the organization at the cost of dedicated workers.

So, I was feeling humiliated and suffocated because all my viewpoints to revive the party were ignored.

Putting my political career at the stake, I joined PDP during youthful years of my life with an aim to provide a secular alternative in J&K under the leadership of late Mufti Mohammad Sayeed. I have been associated with the PDP since 1999 and worked in the party with dedication and commitment.

It was my hard-work and commitment that late Mufti Mohammad Sayeed had provided me an opportunity to serve the people as a Member of the Legislative Council (MLC). I and my family will always remain indebted to Mufti Sahib for providing me such opportunity.

Despite being humiliated and continuously ignored by the party leadership especially after the demise of late Mufti Mohammad Sayeed, I remained associated with PDP because I am a committed disciple of Mufti Sahib.

Important to mention here that it was the result of my hard-work that PDP won only one DDC seat-out of total 140 seats, from Jammu province.

Whereas the drawing room politicians, who are running affairs of the party,  failed to even save deposits of their family members in their respective areas during DDCs elections.

Keeping in view the prevailing situation, being a disciple of late Mufti Mohammad Sayeed it is difficult for me to work in the party which has been hijacked by drawing room politicians, land grabbers and land mafia.

With heavy heart, I am submitting my resignation from the primary members of the party.