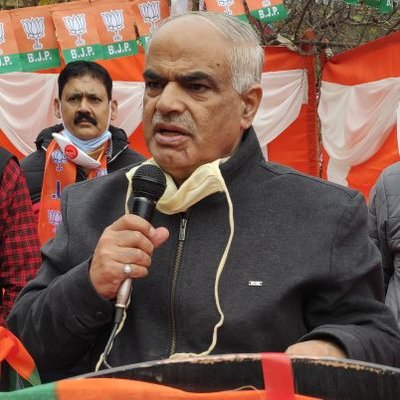 SRINAGAR, Apr 13: Bharatiya Janata Party (BJP) General Secretary (Organisation) Tuesday said that from today, migrant Kashmiri Pandits have started to return to the Valley after so many decades as many of them could be seen participating in religious rituals in Srinagar temples.

“I visited a few temples in Srinagar and apart from the KPs living in Kashmir, I could see a large number of Pandits who had migrated from the Valley, participating in the religious rituals including Hawans. I spoke to many and could gauge that the the process of return of KPs has started from today,” Kould told reporters at Sheetal Nath temple in Srinagar on the sidelines of a religious function of KPs.

He said that as far the security concerns, those living in Kashmir are feeling safe and security related atmosphere is perfectly conducive for the smooth return of KPs back to their roots. “There is no security concern as of now. Situation has improved a lot on ground. As I stated the process of return of KPs has started, I believe KPs who are willing to return to Kashmir will own what I am saying today,” Koul said as per news agency—Kashmir News Observer (KNO)

About the encroachment and renovation of Srinagar temples, Koul said at some places government has encroached temple land and at the other places, blue-eyed people are also involved.

“The blue-eyed people as well as the government itself is involved in encroachment of temples here in Kashmir. The government should work on it and ensure that the encroachment is removed at an earliest,” he said.

Koul also extended greetings to Hindus, Sikhs and Muslims on this day, saying “Today, there is a very pious as the three religious events are taking place on this day including Navratra, Baisakhi and the commencing of holy month Ramadhan—(KNO)