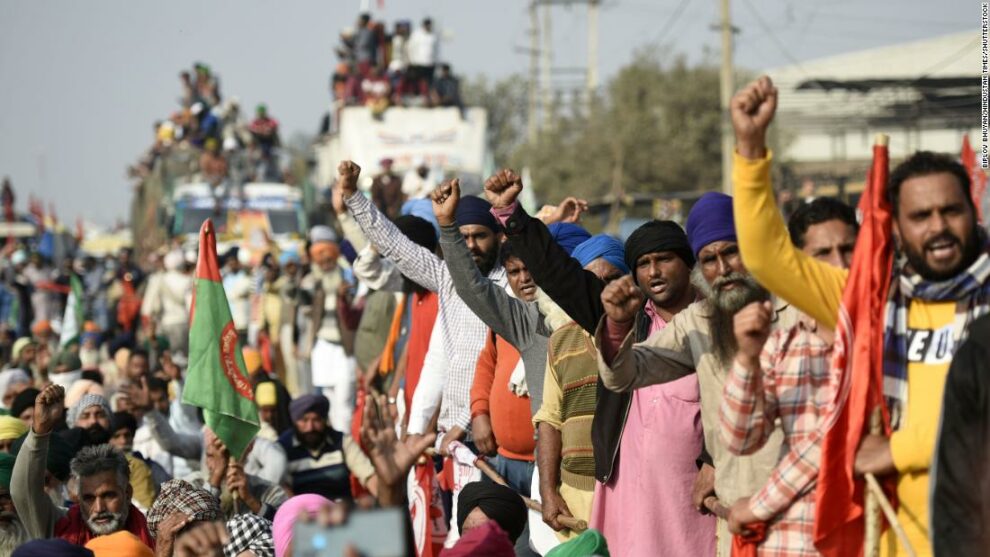 A core feature of the New Indian Politics is how the will of the people is articulated as much via street politics as the formal political party system. These popular protest movements have arisen in the face of a strong centralized state, characteristically in the absence of an effective opposition that would articulate grievances. What sets these protests apart is also how they brought new political figures to the centre stage, and mobilized religious minorities and marginalized people in new coalitions. Equally noteworthy is how the media, forever in search of a single charismatic leader, often described the protests as ‘leaderless’, thereby overlooking the work of collective leadership in running protests. It is on this uncertain turf between the street and the political parties and between the modes of exclusion and inclusion that a diverse people of New India have emerged. But we are getting ahead of ourselves. Let us return to the farm laws and their repeal to further consider New Indian Politics.

That the repeal signalled an unsettling political terrain in Indian politics was evident from the social media trends that gained instant popular traction. If the trend #farmlawsrepealed signalled a plain fact, often a joyous one, then #disappointed captured the state of disenchantment of Modi supporters (dubbed bhakt) as well as the business policy elite who had long made a case for market-friendly ‘deep reforms’ in the farm sector. The passionate response #disappointed was not just about the failure to implement market reforms by a leader who had crafted his image as someone who ‘means business’ in more ways than one. It was also a public expression of disillusionment, the breaking of a spell that had bound the followers to a strongman leader who held out the promise of capitalist growth and the attendant civilizational glory. Some tried to repair the broken spell by recuperating the repeal as a political #masterstroke, a kind of cunning move (Chanakya Niti) whose true intent and effect had not yet been revealed. Others rued the ‘street veto’ that had cast a shadow on Indian democracy. This anxiety was especially evident in the primetime television debates where the anchors pitted street protests as a challenge to the ‘might of the ballot’, one that threatened to undermine the power of the parliament.

It indeed isn’t easy to make sense of this strange turn of events. After all, the repeal was a dramatic about-turn the followers of Modi had least expected, and that too a reversal staged in the full glare of global publicity. It seemed to have upset all that had come to be regarded as politics-as-usual in a post-2014 New India. Some speculated that the repeal was a calculated move made by the Bharatiya Janata Party (BJP) as it was sensing a loss of ground in states such as Punjab and Uttar Pradesh, which were coming up for state elections. While this electoral arithmetic has to be taken seriously, especially given the cynical politics of the BJP and its government, which is forever and only in ‘election-mode’, it would be simplistic to believe that this calculation was the sole guiding factor. This moment of rupture not only disclosed the highly charged affective fault lines in the political landscape but also laid bare new fields of conflict and cracks in the visage of power that had hitherto been deemed invincible. Most of all, it made visible the diverse people who inhabit this landscape of politics, the many agents of politics forged in the new antagonisms of post-liberalization India. As the farmers’ protests refused to dwindle and, instead, new outposts of it popped up in different parts of India, we heard many ask: ‘But who are these people?’ This question was not altogether new. Similar rhetorical questions had been posed of the myriad protesters who came out against the evil trinity of the CAA–NPR–NRC over 2019, before the toxic mix of the authoritarian state, a pogrom in Delhi and the pandemic shut down these protests. Similar questions had been asked then too: ‘Who are these people?’ Tellingly, Modi had dubbed them andolanjeevis or those who live— parasitically it was assumed—off protest movements. The subtext was apparent: those who protested against the government were subverting the national interest, even tarnishing the image of the government and the nation on the world stage. In this scheme of things, the government and the nation were inseparable, and any opposition to the government was taken as an opposition to the nation. Andolanjeevis was the 2021 edition of the category of ‘anti-nationals’, a scornful term popularized by Modi government supporters to accuse dissenters of treachery. It’s a theme that appears to be inexhaustible, reappearing in ever new forms. The most recent iteration was the identification of activists and the civil society as the ‘new frontier of war’, the enemy within the nation—a war that required techniques of ‘fourth-generation warfare’ to be deployed against those citizens who oppose the government.

What we witness here is an unsettling, and unsettled, terrain of the new Indian politics and the many people who forge it. Three key features of these new antagonisms can be identified. First, the politics of protest has become the staging ground for conflicts between the state and a diverse range of peoples, and this especially when the opposition parties are weakened and faced with a dominant government at the centre and hyper-nationalist majoritarian politics. Second, the push towards centralized governance—the ubiquitous ‘one’ model: one nation, one market, one tax, for example—and an authoritarian style has created a strong state as well as frictions within the federal structure of the Indian union. The signature style of Modi’s strongman politics is to conjure spectacles: sudden big-bang policy decisions, often announced on live television broadcasts. If the element of surprise keeps the public enthralled—or petrified, as the case maybe—and ensures undivided media coverage, it simultaneously upstages political opponents. This hegemonic control of the media is crucial in shaping the field of politics within, and against, which the popular protests have emerged Third, connected to this are the ideological moves to reset the nation as an enclosure of global capital aligned with Hindu nationalist culture. This ongoing capitalist-cultural shift is evident in a number of signature laws passed in the past two years—from the revocation of the special status of Kashmir and CAA/NRC to the farm laws and the labour code—that seek to open up new markets within the national territory even as the nation itself is rearranged in the framework of Hindu nationalism. The shift was accelerated during the pandemic, a deployment of crisis-as-opportunity approach to draw investors looking for alternatives to China.

The appearance of the people on the streets is more than an expression of dissatisfaction. It is taking matters in one’s own hands or what was dubbed ‘street veto’, a political action akin to showing a red card when the rules of the game are broken or remade without due agreement. The term ‘street veto’, invoked following the repeal of the farm laws, was used to convey disapproval of both an unceasing out-of-control protest as well as the abject about-turn of the Modi government. If at all, the criticism of street politics opened up an inherent paradox in mass democratic politics: the raw potentiality of crowds is at the heart of mass democratization, and yet it is only by imposing discipline and control that political energy can be harnessed. The democratic politics is renewed by subjects who are simultaneously active but also disciplined. It is this kind of constant tension upon which many people, the figures of politics, emerge.

Excerpted with permission from The People of India: New Indian Politics in the 21st Century, edited by Ravinder Kaur and Nayanika Mathur, Penguin India. Read more about the book here and buy it here.

What were the reasons behind mandating Corporate Social Responsibility in India?
The LIT Digital Awards 2022 announces its winners
Comment