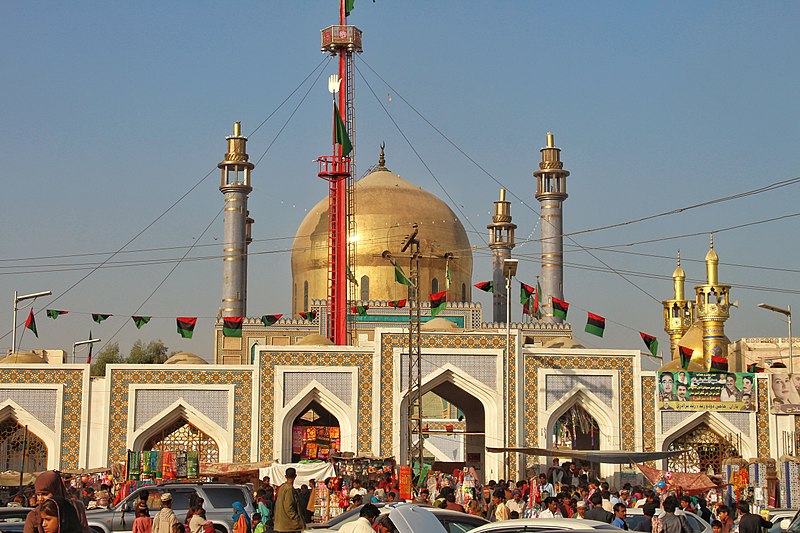 Sitting at the main door of the tomb, a Muslim devotee gestures to a Muslim woman to drape her scarf over her head. On the other side is the Hindu caretaker of the temple, gesturing to Hindu women to prostrate before the shrine. When I ask him which religion he belongs to, he smiles and confesses to a dual identity.

This is the tomb of Jhulelal, also known as Shaikh Tahir. Here both Muslims and Hindus worship in a shared space where the mosque and temple stand side by side. There are many such syncretic shrines in Lower Sindh, especially in the districts of Thatta and Badin, where both Muslim and Hindu devotees venerate the saints and lovingly acknowledge each other’s presence, carrying forward the centuries-old, shared heritage of Sindh.

The shrine of Jhulelal is located near Tando Adam town in the district of Sanghar, and takes the form of a walled complex containing a mosque, a temple, a domed well, and a shrine containing the sandals of Uderolal. The cult of sandals and footprints is common in many religious communities across the subcontinent, whether Jain, Hindu, Buddhist, or Muslim, who built structures over revered footprints as a mark of veneration. Jhulelal, also called Uderolal, Amar Lal, Darya Pir, Khawja Khizr, ZindaPir and Shaikh Tahir, is a personification of the traditional Sindhi values of tolerance and harmony.

According to legend, Uderolal was born in Nasarpur, a town famous for ceramics and ajrak. The popular hagiography of Uderolal tells that he grew up to be a valiant and heroic man. It is believed that when Hindus were being forcibly converted by Mirkh Shah, the ruler of Thatta, he set out on his horse to save them. In another version, he rides out to Thatta on a palla fish on the water of the Indus. While the most popular depiction of Jhulelal shows him seated on a palla, another popular iconography shows him riding a horse and wielding a sword. The militant stance depicts his challenge to the despotic rule of Mirkh Shah, who turns out to be an imaginary ruler as his name is missing from the list of dynasts who actually ruled in Thatta between the thirteenth and the eighteenth centuries.

There is a possible interpretation regarding the fictional rule of Mirkh Shah: that it might have been a reference to the Sunni persecution of Ismailis, which took place at the hands of Ghaznavid rulers and governors in Sindh and Multan. Many of the Ismaili Dars in Sindh concealed their faith, preaching in secret and carrying dual identities to protect themselves from possible persecution.

It is interesting to observe that the term Jhulelal is also used for Lal Shahbaz Qalandar, a saint who himself carried dual identities – with Hindus calling him Raja Bharthari. Bharthari’s nephew Gopi Chand was also called Pir Patho by Sindhi Hindus. Pir Patho’s shrine is located 25 km from Thatta. Many Hindus in Tharparkar, especially in Diplo, have constructed asthaans or small temples dedicated to Pir Patho.

Sadly, the tomb at Nasarpur, which marks the birthplace of Jhulelal / Shaikh Tahir, is now occupied by a family that has done some damage to the structure, and closed it to Hindu pilgrims. We have requested the Government of Sindh’s Culture, Tourism and Antiquities Department to rescue it from the occupants and convert it into a ‘Shared Heritage Museum’ where the artefacts of a pluralistic religious heritage could be displayed.

The shrine of Lal Shahbaz Qalandar in Sehwan attracts more people at its annual Urs than any other shrine in Sindh. The great saint died in 1274, and an imposing tomb was erected over his grave with a dome and other extensions added later. In 1994, it collapsed and was rebuilt in the second term of the late Mohtarma Benazir Bhutto as Prime Minister of Pakistan.

Many histories and hagiographies have been written on Lal Shahbaz Qalandar, with well-known books dating as far back as 1277 and 1357. These present his miracles, genealogy, spiritual initiation, travels, and his arrival in Sewhan. The information in them is predictably contradictory, and there is no consensus on which tradition he followed or who his spiritual mentors were. It is simply known that he was a great mystic and wandering Qalander of the thirteenth century, who led a celibate life, and there are many places in Sindh and Balochistan, takiyas, chilagahs, astans, kandas, khudis – basically small structures and trees – which mark his visits. It is believed that his name was Syed Usman, and that he was born in Marwand near Tabriz, so he was known as Usman Marwandi. Popular tradition has it that he wore red garments, hence the name Lal.

*Image 2. The photo of Lal Shahbaz Qalandar at Thano Ahmad Khan is flanked by the images Guru Nanak on the left and Shiva on the right (Picture Courtesy: Zulfiqar Ali Kalhoro)

The following of Qalandar is so powerful that it transcends not just religious boundaries but boundaries of gender too. It is the only dargah in Sindh where, traditionally, not just men but women and hijras are also welcome to participate in dhamaal. Lal Shahbaz Qalandar was venerated under the name of Raja Bharthari by Hindus. Lal Shahbaz Qalandar is also believed to have been the lord of Bairagi ascetics and sometimes referred to as Raja Virag. Some ashrams of Shaivite ascetics have Lal Ji Khudi, small representations of Lal Shahbaz Qalandar, usually posters and tridents.

The spiritual power of Lal Shahbaz Qalandar further manifests in the shrines of many of his disciples not just on the streets of Sehwan Sharif but in other parts of Sindh too. The earliest such shrine is located at Kanra village near PirGebi and was established about six hundred years ago. Another impressive shrine complex in Thano Ahmad Khan is about two hundred years old, but the first small structure was built in 1995 and it was later expanded to build an impressive dargah and other buildings in 2015. Its entrance is decorated with kashi tiles of Nasarpur, and the interior of the tomb is decorated with glasswork. Under the tomb lies the symbolic grave of Lal Shahbaz Qalandar. An adjoining hall displays a poster of Lal Shahbaz Qalandar’s shrine at Sehwan, and the poster is flanked by an image of Lord Shiva on the right and Baba Guru Nanak on the left. Other shrines, Lal jo Kando, Qalandar jo Astan, and Lal ji Khudi, are located in the vicinity. These contain dhunis and tridents, and Qalandari dervishes and malangs celebrate and dance here also. The worshippers are both Muslims and Hindus.

Excerpted with permission from the essay “Reviving a Lost Heritage: A Tour of some Religious Sites of Sindh with one of its most expert guides, Anthropologist Zulfiqar Ali Kalhoro”, Sindhi Tapestry- Reflections on the Sindhi Identity: An Anthology, edited & curated by Saaz Aggarwal, Black and White Fountain. Read more about the book here and buy it here.

Join The Dispatch Whatsapp Group to stay updated
The Dispatch is present across a number of social media platforms. Subscribe to our YouTube channel for exciting videos; join us on Facebook, Intagram and Twitter for quick updates and discussions. We are also available on the Telegram. Follow us on Pinterest for thousands of pictures and graphics. We care to respond to text messages on WhatsApp at 8082480136 [No calls accepted]. To contribute an article or pitch a story idea, write to us at [email protected] |Click to know more about The Dispatch, our standards and policies
TagsBlack and White Fountain Saaz Aggarwal Sindhi Culture Sindhi Tapestry