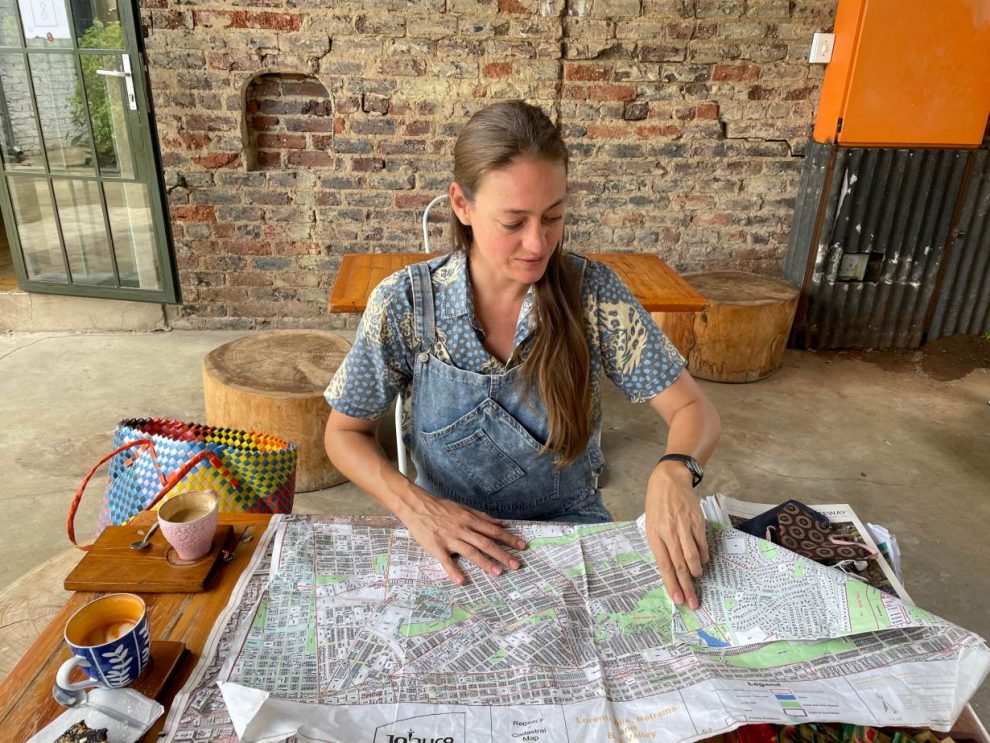 Most people could only see a polluted ribbon of water in Johannesburg’s Jukskei but two pioneering women have set out to restore one of the city’s largest rivers.

Conservationist Romy Stander and artist Hannelie Coetzee want to tackle water pollution using research, green infrastructure and art in a model they hope can be replicated for other rivers across the country.

Working closely with the local community, the duo launched an initiative to remove alien invasive plants in December 2020, with plans underway to build natural water filters to protect the river.

“Water is a reflection of society, and this one is toxic,” said Stander, who co-founded the charity Water for the Future with Coetzee.

Mining, agriculture, urbanisation and pollution are adding to the rapidly decreasing quality of fresh water sources in South Africa, according to local water utility Rand Water.

“But it can recover and the pollution can eventually go away, to a certain degree” said Stander, seated at a table in a nearby coffee shop, surrounded by a pile of creased maps, city plans and a frog book.

In South Africa, satellite imagery from the Norwegian Institute for Nature shows wealthier suburbs are 700 metres closer to public parks and have 9% more vegetation and 12% more tree cover than poorer areas.

“We want to create a green corridor filled with safe water and eco-art that communicates with people,” said Stander, who works on community projects with Nando’s, a restaurant chain that has funded some of the river rehabilitation.

The women’s project has been compared to the High Line Park in New York City, a 1.5-mile (2.3-km) strip of greenery built on an old elevated railroad that runs along Manhattan’s West Side, she added.

Water for the Future is based at Victoria Yards, a former laundry factory in inner-city Johannesburg that now houses art studios, community vegetable gardens, a clinic, a creche and more, built alongside the Jukskei.

Together with engineers, researchers, architects and scientists, Stander and Coetzee are trying to understand what can be done to fix the river permanently.

A monitoring station and a water quality sampling device were installed last September by Campbell Scientific, a scientific instrument provider, and SRK mining consultants, to gauge the river’s water quality and discharge.

This and other research has helped Water for the Future understand the impact of illegal sewage connections, collapsed stormwater drains and high rates of urbanisation in the city that all put pressure on the river.

“What we have seen so far is that the water is full of toxins and it is frightening,” said Coetzee, adding that further water quality results will be available around March.

Adding to the river’s problems are invasive plants that grow alongside its banks and overflow into the water.

City officials did not respond to requests for comment but a report by the country’s ministry of environmental affairs highlighted how alien plants reduce water runoff by between 1,500 to 2,500 million cubic metres per year.

Water for the Future has been consulting with experts to understand what the invasive plants can be used for.

Alongside a stone-built canal by Victoria Yards, workers in yellow bibs sweated away in the sun as they cut the jungle-like vegetation spilling into the river.

“For me, this is more important than what is being discussed in parliament,” said Sylvester Kumwenda, 48, one of the workers, holding a pick-axe.

“If we can heal our environment then our young ones will know what nature looks like, and that is priceless” said Kumwenda, one of about 30 local residents employed through the rehabilitation project.

A small wooden fence alongside the river is one idea Water for the Future is playing with, alongside turning the alien vegetation into biomass – natural fuel pellets used to produce electricity or heat.

Water for the Future co-designed and built an “eco-tree seat” with the city’s road maintenance company, Johannesburg Roads Agency, that involved cutting into the roadside pavement to form a circular structure.

It captures and harvests rainwater into the roots of a tree, around which people can sit.

“People shouldn’t have to climb a mountain to be in nature,” Coetzee told the Thomson Reuters Foundation.

The eco-tree seat is one of many innovations Coetzee and Water for the Future are researching to improve sustainable drainage and manage water flow into urban rivers.

Coetzee worked with the Timbuktu in the Valley aftercare centre where children in Victoria Yards were asked to draw how they feel about the environment.

One of the results pictured a crying cloud which was converted into a mosaic image now found throughout the neighbourhood as a way of creating environmental awareness.

“The intention was to see if we could get the kids to water the tree without telling them,” said Coetzee. “And the tree is growing so well, the kids feel encouraged and are taking ownership.”

“We need to be very careful about how gentrification takes place,” said Stander, who has been engaging with landlords whose properties are alongside the river pilot site.

Despite initially being called “naive” by critics for their unconventional approach to restoring the site, Coetzee said it is important to think differently.

“It’s not just us, the French want to swim in the Seine after a century of banning it, and water warriors in Copenhagen want to build a natural pool in a canal. We have to convince people that these amazing things are possible,” said Coetzee.

Stander, who lives close to the river, enjoys driving around in her pick-up truck, chatting to people who live alongside the river and analysing the invasive plants that keep springing up.

“Instead of cementing rivers underground we need to let them live again,” she said. “Just imagine how beautiful it could be.”

Concern over rich-poor divide seen on the increase during pandemic
Farmers fight back: Making animal feed from a locust plague
Comment