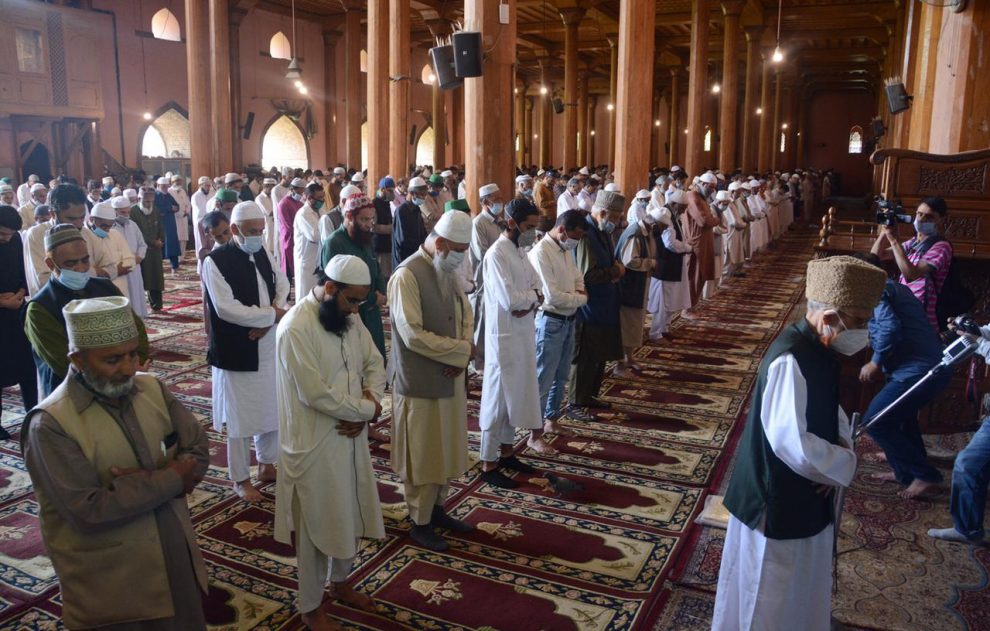 Witnesses told that the people from different areas of Kashmir thronged the Jamia Masjid today to offer the mandatory Friday congregational prayers, which remained suspended for nearly four months due to the second Covid-19 wave across Jammu and Kashmir.

The Anjuman Auqaf Jama Masjid had already announced that the congregational prayers will be held on this Friday and had stated that the cleaning process has been started.

Witnesses said that the Covid related guidelines including wearing of face masks and social distancing were followed by the devotees at the Jamia Masjid.

The resumption of the mandatory Friday prayers at Jamia Masjid brought smiles on the faces of devotees, however, demanded immediate release of the historic Masjid’s head cleric, Mirwaiz Umar Farooq.

The people after offering Friday prayers, welcomed the decision of resumption of the congregational prayers, however, stated that it should also release the head cleric of historic Masjid, who delivers Friday sermons at the pulpit of centuries old Masjid.

Meanwhile, in a statement, Anjuman Auqaf Jama Masjid said that all arrangements were made by the Auqaf to ensure Covid SOPs were in place and were observed by all who offered prayers at the Masjid.

“President Anjumam Auqaf Jama Masjid and Mirwaiz-e-Kashmir Muhammad Umar Farooq was not allowed to move out of his home for the Jumma majlis waz-o-tableegh (Friday Sermon) and offering of Friday prayers at the Jama Masjid. Mirwaiz continues to be under house detention for the past two years, since August 2019,” the statement said.

On this occasion, Imam Hai Moulana Syed Ahmed Naqshband in his address thanked Almighty Allah that prayers had been resumed at Jama Masjid, with all Covid protocols in place, but lamented that since the past two years Mirwaiz e kashmir has been arbitrarily detained at his house by the state authorities, and is not even allowed to visit Jama Masjid to deliver the Friday sermon- which people are longing to hear and participate in.

“This is causing people great hurt and anguish. It is the centuries old tradition of Mirwaizeen-e-kashmir who delivers the unique Friday sermon from the pulpit of the Jama Masjid,” the statement said.

Imam Hai said that by keeping the pulpit forcibly empty by detaining Mirwaiz, authorities are deliberately hurting the sentiments of the Muslims of the Valley—(KNO)