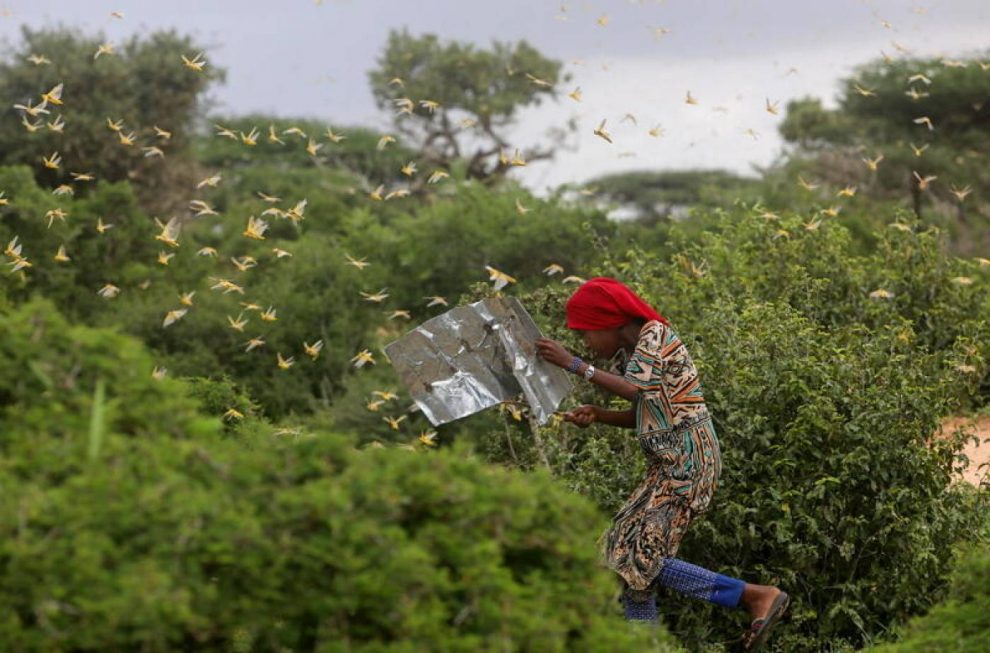 NAIROBI/GAROWE: A new generation of locust swarms is threatening to wipe out the livelihoods of farmers and herders across eastern Africa – deepening a food crisis in a region where 35 million people are already hungry, the United Nations warned on Wednesday.

From January to August, massive desert locust swarms swept across Somalia, Ethiopia and Kenya, ravaging crops and decimating pasture in the worst outbreak in decades.

Governments, supported by U.N. agencies and international charities, responded with large-scale aerial and ground spraying of pesticides to destroy the swarms, which scientists have linked to climate change.

But widespread rains in Ethiopia and flooding caused by a cyclone in Somalia last month have created favourable breeding conditions, allowing locust infestations to increase, said the U.N. Food and Agriculture Organisation (FAO).

“We have achieved much, but the battle against this relentless pest is not yet over,” said FAO Director-General Qu Dongyu in a statement.

“We must not waiver. Locusts keep growing day and night and risks are exacerbating food insecurity for vulnerable families across the affected region.”

Locust swarms are already forming in Somalia and Ethiopia and threaten to re-invade northern Kenya, while breeding is also underway on both sides of the Red Sea, posing a new threat to Eritrea, Saudi Arabia, Sudan and Yemen, said the FAO.

Habib Mahmud, an environmental activist in Galkayo town in Somalia’s semi-autonomous northern region of Puntland, said farmers and pastoralists had been severely affected.

“There were close to 5,000 pawpaw trees in this farm located on outskirts of Galkayo. The trees were completely stripped bare by locusts in a few hours. No tree survived,” Mahmud told the Thomson Reuters Foundation by phone.

“The owners of that farm told me they lost their entire source of living, there was nothing left for them.”

Puntland authorities estimate that almost one-third of farmers have gone out of business and more than 35,000 families have lost jobs and income due to the devastation caused by the insects.

Aid workers say herders need veterinary care and fodder for starved livestock, while farmers require cash to help them survive the months until their next harvest.

Kenyan authorities said they were procuring pesticides, aircraft for spraying, and deploying ground surveillance teams to track the movement of locusts and inform communities.

“These locusts have the potential to destroy farmlands and any other form of green vegetation,” Kenyan government spokesman Cyrus Oguna told a news conference on Tuesday.

“If left unchecked in our country, the locusts have the potential to undermine our food security.”

More than 35 million people are acutely food insecure in Ethiopia, Kenya, Somalia, Sudan and Yemen. The FAO estimates this number could increase by another 3.5 million in the coming months, if nothing is done to control the latest outbreak.