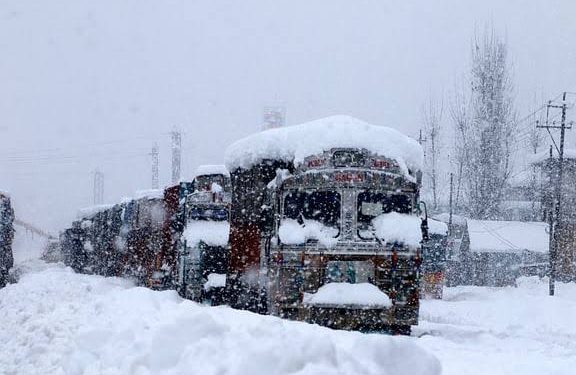 Banihal: Fresh snowfall and multiple landslides at different places on Saturday forced the closure of the 270 km Jammu-Srinagar national highway, the only all-weather road linking Kashmir with the rest of the country, officials said.

The Banihal-Qazigund sector of the highway experienced overnight snowfall while landslides and shooting of stones from the hillocks were triggered by heavy rains at Rompadi-Banihal, Shalgardh-Wagan, Moumpassi-Ramsu, Panthiyal, Digdole, Maroog, Monkey Morh, Cafeteria Morh and Mehar in Raman district, the officials said.

They said a truck driver Waseem Ahmad Dar of Baramulla was injured when his vehicle was hit by a rolling boulder at Mehar around 4.30 am.

Dar was en route to Kashmir from Jammu and was rescued by a joint team of the police and civil volunteers, the officials said, adding his condition is stated to be stable .

The closure of the highway left dozens of trucks stranded at different places, the officials said.

With the improvement in weather, they said the road-clearance agencies have pressed men and machinery to clear the debris off the highway.

Reports of snowfall ranging between a few inches to over one feet were also received from the high altitude areas of Kishtwar, Reasi, Doda, Poonch, Rajouri and Kathua district of Jammu region.

The Trikuta hills, housing the famous cave shrine of Mata Vaishno Devi in Reasi, have turned white after the fresh snowfall but the pilgrimage was going on smoothly, the officials said.