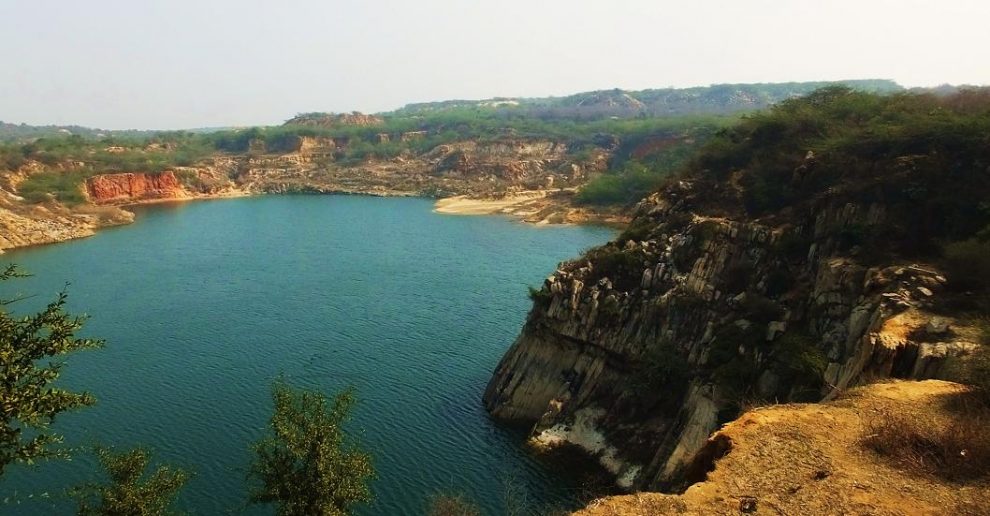 On a bleak mid-January afternoon, the trees of the Ridge are draped in a thick, polluted haze. The sun shines weakly through the smog, but I still work up a sweat as I climb up a steep quartzite slope. A friend and I are in a park called Sanjay Van, just north of Mehrauli, Delhi’s historic first city. The dirt trail we’re following is more stone than soil; bits of rock and coarse red sand crunch underneath our feet as we make our way uphill.

We reach the top of the hill and take in the view. To the right looms the graceful tower of QutbMinar; to the left are the ruins of Delhi’s first walled fortress; in front of us is a sea of green. Behind us, the slope gently descends into a wide basin, remarkably flat in this hilly terrain. Years ago, some enterprising young men cleared all the trees and shrubs to create a grassy cricket ground. At the moment, two cricket games are taking place side by side, one for kids and one for adults.

As the cricketers laugh, lounge and play, a thin woman in a simple sari emerges from the forest and stands at the edge of the clearing, a huge pile of firewood balanced on her head. She is soon joined by a young boy and girl, each carrying smaller bundles of wood. They throw down their loads and sit for a few minutes, watching the revelry around them. Then they get up, and the two kids help the woman heave the firewood back onto her head. They skirt the edge of the cricket games and disappear into the forest on the other side.

Meanwhile, on the other side of the slope, we see a grizzled old man wrapped in a shawl, leading several goats through the underbrush. My friend calls out to him, and he replies gruffly. He is busy finding a suitable grazing ground for his flock, and he has little interest in the two odd figures yelling at him from the hilltop.

As we descend from our perch and head towards the park exit, we see more women collecting firewood, handling the branches carefully to avoid their prickly thorns. Throughout the year, firewood is a valuable fuel source for those who can’t afford gas connections. But firewood is an even more precious commodity in mid-winter, when families make small fires outside their homes to beat back the damp chill of the season.

Near the exit of the park, we spot an official from the Delhi Forest Department, giving instructions to a group of contract workers about pending maintenance tasks. We chat briefly with the official, and as we exchange pleasantries, the group of women with their firewood crosses our path, heading home with their spoils. The official looks at them, looks at us, and lightly chides the women. They continue walking, unconcerned.

Technically, the women are breaking the law. So too is the old man grazing his goats. Sanjay Van is part of the Ridge’s Reserved Forest zone, and as such is entitled to the state’s most stringent protections. Firewood collecting and grazing are strictly prohibited, as an imposing sign at the park entrance makes clear. And yet, in reality, the prohibition is not so strict. The wood-collectors and shepherds have clearly come to an understanding with the Forest Department officials.

Some might dismiss this as a simple case of government corruption, but the truth is much more complicated, especially when one delves into the history of the area. Sanjay Van was named a Reserved Forest in the 1990s. For many years before that, it served as a commons for the surrounding villages, and it was used extensively for grazing and wood-collecting. These erstwhile rural areas have now been swallowed up by the expanding city (they bear the strange administration designation “urban villages”), but vestiges of an earlier life remain, especially for the area’s poorer residents, who depend on the natural resources of the park. Elders in the area, who remember when their village truly was a village, resent the intrusion of the state and the restrictions on what was once their common property.

This dynamic is not just confined to Sanjay Van. Before the official label of “Reserved Forest” was imposed, the Ridge’s primary ecological role—at least as far as humans were concerned—was to serve as agrazing ground and woodlot. This role was largely determined by the Ridge’s geology, albeit in a paradoxical way. Although the Ridge’s rocky soil is a harsh habitat for shrubs and trees, it was nonetheless the preferred location for gathering fuel and fodder.

To understand why, it’s necessary to look at Delhi’s ecology, and particularly its soil composition. The ancient Aravallis cut through the landscape of Delhi, leaving a band of rocky, infertile soil. Surrounding this is an environment shaped by a much newer and more imposing geological formation: the Himalayas, from whose glaciers the Yamuna river originates. The (relatively) new alluvium from the Yamuna river system gives the non-Ridge soil of Delhi its fertility. In traditional terms used for Delhi’s soil types, the hilly Ridge land (called kohi) was distinguished from three different soil types that are broadly alluvial: bangar (fertile soil on level land), khadar (the sandy riverain of the Yamuna) and dabar (low-lying land that was subject to seasonal flooding).

As human settlements in Delhi grew, they needed an ever-increasing food supply, and any zone with fertile soil was taken over by agriculture, which became increasing intensive over time. The Ridge, with its rocky soil, was not part of this agricultural zone and could thus be put to different uses: grazing, for instance, or firewood collecting. In fact, the stunted trees and grasses that managed to grow on the Ridge provided ample fodder for livestock, making it a prime location for pastoralists.

On the local scale, then, the Ridge’s rocky soil serves to separate Delhi’s pastoral zone from its agricultural zone. But this small-scale picture should be complemented by a much broader view. On a regional level, Delhi and its Ridge mark a transition from the arid habitats to its west to the fertile ones to its east. Thus, on both a microcosmic and a macrocosmic level, the Ridge serves as a dividing line between two kinds of soil and two kinds of ecologies, which in turn favor two distinct livelihood strategies—pastoralism and agriculture. In practice, of course, the distinction is not so neat. Agriculture and pastoralism are often practised in tandem, sometimes by the same people. The fact that Delhi has long supported both livelihood pursuits suggest that the city, and the region as a whole, represent a mosaic of ecological and economic landscapes.

Even given this hybridity, though, communities with pastoral roots have had an outsize impact on Delhi. This is largely because pastoralists are, on the whole, a more mobile bunch. Pastoralists entering the Indian subcontinent from arid Central Asia have played a crucial role in the shaping the Ridge and the city of Delhi. The history of these transformations, which this chapter seeks to tell, is one in which ecological and social history are intertwined. It’s about the Ridge’s stony soil and what has emerged from that soil; it’s about those migrants who put down roots in Delhi and begin to consider themselves “sons of the soil.”

If the previous chapter was an eclectic geological history of the Ridge, here is an eclectic ecological history, with human communities fully integrated into the story of the land. Although pastoral groups are central to this drama, they are just one part of a larger cast of players, which includes saints, bandits, warriors, merchants, pilgrims, farmers, landlords, administrators, miners, politicians, lawyers, activists and many more. All these figures have sprung up on the soil of the Ridge.

Excerpted with permission from Fractured Forest, Quartzite City: A History of Delhi and Its Ridge, Thomas Crowley, jointly published by SAGE Publications and Yoda Press under the Yoda-SAGE Select imprint. Read more about the book here and buy it here.

Join The Dispatch Whatsapp Group to stay updated
The Dispatch is present across a number of social media platforms. Subscribe to our YouTube channel for exciting videos; join us on Facebook, Intagram and Twitter for quick updates and discussions. We are also available on the Telegram. Follow us on Pinterest for thousands of pictures and graphics. We care to respond to text messages on WhatsApp at 8082480136 [No calls accepted]. To contribute an article or pitch a story idea, write to us at [email protected] |Click to know more about The Dispatch, our standards and policies
TagsAravallis Delhi Ridge ecology Fractured Forest Quartzite City Green lungs of Delhi Thomas Crowley