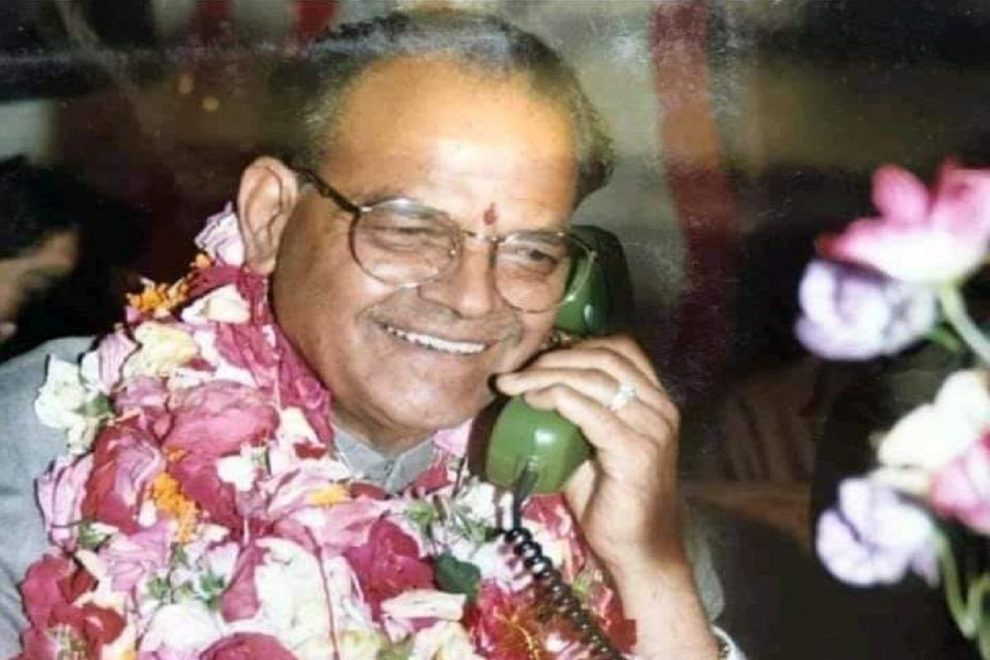 The Dispatch Staff
Add Comment
Veteran Congress leader and former Union minister Pandit Sukh Ram has passed away, his grandson said. He was 94.

Shimla, May 11: Veteran Congress leader and former Union minister Pandit Sukh Ram has passed away, his grandson said. He was 94.
Sukh Ram was admitted to the All India Institute of Medical Sciences (AIIMS) in New Delhi on May 7.
A Himachal Pradesh Congress leader, Sukh Ram’s grandson Aashray Sharma in a Facebook post on late Tuesday night wrote, “Adieu Grandfather, Now phone will not ring (Alvida Dadajee, Abhi Nahi Bajegee Phone Ki Ghanti).”
However, the post did not mention when he breathed his last.
Sharma also posted his childhood photo with Sukh Ram on Facebook.
Sukh Ram suffered a brain stroke in Manali on May 4, following which he was admitted at the regional hospital in Mandi. From there he was airlifted to Delhi on Saturday for better treatment at AIIMS.
Himachal Pradesh Chief Minister Jai Ram Thakur on May 7 provided a state helicopter for airlifting the veteran political leader to Delhi.
Sukh Ram was the Union Minister of State, Communications (Independent Charge) from 1993 to 1996. He was a member of Lok Sabha from the Mandi constituency of Himachal Pradesh.
He won the Vidhan Sabha elections five times and the Lok Sabha elections three times.
In 2011, he was sentenced to five years of imprisonment for corruption when he was Communications Minister in 1996.
Sukh Ram’s son Anil Sharma is a BJP MLA from Mandi.
Sukh Ram represented the Mandi Assembly seat from 1963 to 1984. During his tenure as Animal Husbandry minister in Himachal Pradesh, he brought cows from Germany which led to the increase in income of the state farmers.
He was elected to the Lok Sabha in 1984 and served as a junior minister in the Rajiv Gandhi government.
Sukh Ram served as minister of state for defence production and supplies, planning and food and civil supplies. Sukh Ram was the Union minister of state (independent charge) holding the communications portfolio from 1993 to 1996.
While Sukh Ram represented the Mandi Lok Sabha constituency, his son Anil Sharma contested and won the Assembly seat in 1993.
Sukh Ram won the Mandi Lok Sabha seat in 1996, but he and his son were expelled from the Congress after the telecom scam. Subsequently, they floated the Himachal Vikas Congress party, which entered into a post-poll alliance with the BJP and joined the government.
In 1998, Sukh Ram contested the Assembly Elections from Mandi Sadar and won by a huge margin. His son Anil Sharma was elected to the Rajya Sabha in 1998.
In the 2003 Assembly poll, he retained the Mandi Assembly seat but rejoined Congress in the run-up to the 2004 Lok Sabha polls. His son Anil Sharma won the Mandi Assembly seat in 2007 and 2012 as a Congress candidate.
Prior to the 2017 Assembly elections, Sukh Ram joined BJP along with his son Anil Sharma and grandson Aashray Sharma.
However, Sukh Ram along with his grandson Aashray Sharma rejoined Congress right before the 2019 Lok Sabha elections to get Congress ticket for Aashray but he could not win.
Sukh Ram was born on July 27, 1927. His other grandson Aayush Sharma is an actor and married to Bollywood superstar Salman Khan’s sister.