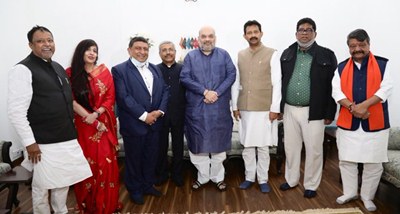 Rajib Bandopadhyay, former Minister of Mamata Banerjee cabinet, had resigned from the state Legislative Assembly as well as from TMC on Friday. MLA of Bally constituency Baisali Dalmiya had been expelled from the TMC whereas Parthasarathi Chatterjee was removed from the post of Vice President of the party unit of Nadia district. MLA of Uttarpara constituency Prabir Ghosal, ex Mayor of Howrah Rathin Chakraborty and actor Rudranil Ghosh were among the TMC leaders who left the party yesterday.

Meanwhile, Union Minister Smriti Irani will be taking part in the BJP rally at Dumurjola in Howrah today. The rally was earlier scheduled to be addressed by Mr Shah. Rajib Bandhyopadhya said, Mr Shah will be participating in the rally virtually where some more leaders are supposed to join their camp from TMC.