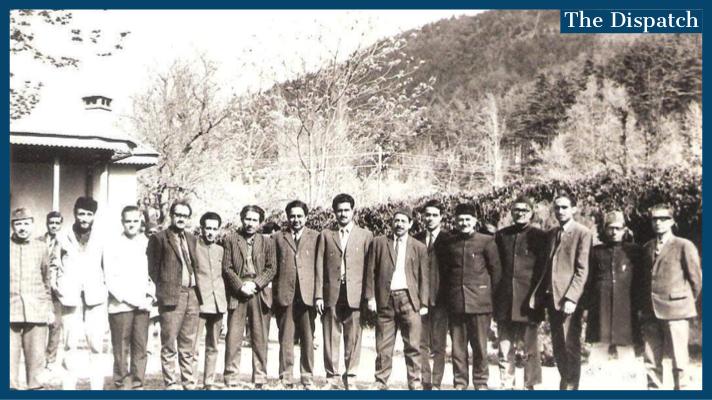 Mohammad Sayeed Malik
Add Comment
The KPC was housed in the only structure that then existed in the Sher e Kashmir Municipal Park and, eventually, was handed back to its owner, the then Srinagar Municipal Committee, as smoothly as it had been taken over a decade or so earlier

Thank God. We, the oldies in journalism in Kashmir, were able to create our firstever Kashmir Press Club half a century ago, run it as a vibrant institution for nearly a decade before letting it sign off on its own. It had remained defunct for some time for various reasons.
But, mercifully, it’s quiet disappearance contrasted with the rumbustious forced exit of its 5-decade later successor that was also marred by ugly washing of dirty linen in public.
It’s almost unnoticed exit, however, cannot overshadow a few significant achievements to its credit.
Public life in Kashmir being perpetually subservient to notorious vagaries of fluctuating political atmosphere, the KPC faded out mid-1970s in the wake of drastic change in the political climate in 1975. The event did not even register itself.
The KPC was housed in the only structure that then existed in the Sher e Kashmir Municipal Park and, eventually, was handed back to its owner, the then Srinagar Municipal Committee, as smoothly as it had been taken over a decade or so earlier
Khawaja Sanaullah Bhat, editor AFTAB, was formally elected its first president and re-elected subsequently. Among its vice presidents were Ghulam Rasool Arif of daily HAMDARD and Mohammad Yousuf Qadri of the daily KHIDMAT. JN Sathu became its first general secretary and I succeeded him in the following election.
KPC had been conceived of as sort of an umbrella organization of our individual professional units, like working journalists (news reporters) affiliated to Indian Federation of Working Journalists (IFWJ) and National Union of Joirnalists (NUJ), Kashmir Editors Conference, non-working journalists, like calligraphists and others directly associated with this occupation.
Primary motivation was to seek solution to common professional problems and, importantly, to tackle hurdles in the working relationship between the media and the government. Easier said than done, even in those relatively less complicated circumstances
Productively, KPC arranged and regularly held within its office premises a numberof events ranging from internal meetings to discuss our professional issues to inviting visiting and local dignitaries from politics and other walks of life and to stage a series of press conferences with local and visiting persons.
All of us benefited and gained in professional skill. More, a purposeful bon homie became its byproduct. Cordial atmosphere within the profession was perceptible, notwithstanding the usual competitive professional rivalries.
Not that there were no differences, personal and/or otherwise. As a few chose to go it alone or keep away, for their own reasons. But this was hardly audible, much less so jarringly visible as it is today.
The KPC gained in its public stature and retained its public utility as well as professional credibility until it lasted.

I can recall that on one occasion during Sheikh Mohammad Abdullah’s (while in opposition) brief presence in Kashmir we invited him at the KPC office for a free, frank exchange of views. He was forthcoming even on delicate nuances of his political philosophy and many of us came back with better understanding about what he stood for and why
He graciously reciprocated our invite a couple of weeks later by hosting a sumptuous lunch on a house boat in Nagin Lake where some of us also switched into a swim suit, including veteran Pran Nath Jalali, and joined SMA as he took the plunge into the lake. I remember, how he pulled the leg of non-swimmers and shared jokes with us all. The lunch served was sumptuous
Another notable KPC invitee—from outside the state—was the then fiery head of the CPI, Sripat Amrit (SA) Dange. It was a pleasure to interact with someone who was highly respected across the board for his knowledge, understanding and repartee. We, reporters, benefited a lot from this kind of productive interaction. Dange’s discourse covered the entire gamut of Indian politics of which not many of us were even aware. Especially, his exposition of certain key nuances of National politics versus Kashmir politics still hold good. For us it was a useful lesson
KPC also met regularly to discuss common professional issues and those pertaining to our working conditions. Modern Technology was then nowhere in sight of getting hold of the profession as it stands today. Man still mattered more than the machine and inter-personal relationships were valued for mutual good. Means of communication were still primitive but the credibility of the media and media persons was by and large intact
However, sometime after February, 1975, the political climate across the state changed beyond recognition. Sheikh Saheb was back in power. Ironically, legitimacy of the system returned with a jarring authoritarian streak that adversely affected press freedom. There was nothing in the air to propel the idea of reviving the dormant KPC. Meanwhile, the general atmosphere got vitiated with the new regime seeking to tighten curbs on public opinion and its formal outlet
After winning 1977 Assembly elections, SMA government opted for (a permanent) Public Safety Act to replace Preventive Detention Act (PDA) that had to be annually extended with legislative approval. Draft PSA had ridiculously stringent anti-media and anti-mediaperson proviso.
Thanks to our latent, but mercifully not dead KPC-spirit, we all joined ranks and put up strong, fairly long resistance against the PSA. Our persistent protest found echo across the nation. We joined hands and held protest demonstrations. At times we were lathicharged. There was hue and cry outside the state. A delegation of senior editors headed by Kuldip Nayar came to demonstrate solidarity with us and joined our protest at Partap Park
Ultimately, the state government had to water down anti-media and other more draconian provisions before adopting the PSA. Retrospectively, I see it as the victory of our old KPC fighting spirit, though KPC itself was long gone.
Meanwhile, as the KPC remained dormant for long it’s only building was taken back by the SMC, removing the last trace of an umbrella organization of media persons in Kashmir

Are we now watching its action replay? Or is it a different thing in its colour and complexion?

(Below is an old photograph of that time probably taken outstation. I don’t remember the exact occasion either. From what I presume is that It shows a group of KPC office bearers with two senior members of the Syed Mir Qasim-headed government, namely works minister Mufti Mohammad Sayeed and Education Minister Abdul Ghani Lone. Probably, because these two ministers were deputed for working liaison with the media to sort out issues relating to functional relationship between the two sides.
Things were not always pleasant at these encounters though there was definitely a far more serious appreciation of the role of media. I must hasten to add, working environment too was not as hazardous as it is half a century later, today. Animosity was certainly not as malignant.
Others in the photograph include : (from right to left) JN Sathu, Mohammad Yusuf Qadri, Mohammad Sayeed Malik, Om Saraf, Ghulam Rasool Arif, BL Kak, Kh Sanaullah Bhat, Abdul Ghani Lonr, Mufti Mohammad Sayeed, Sofi Ghulam Mohammad, Mohammad Shafi Samnani, (probably) Tahir Muztar,Parvez Mohammad Sultan, Shamboo Nath Gurkha and minister Abdul Aziz Zargar)

The author is a veteran journalist and commentator. Views expressed here are his personal.

China-Russia Vs US bloc: India in the middle?
Brewing discontent ahead of polls
Comment