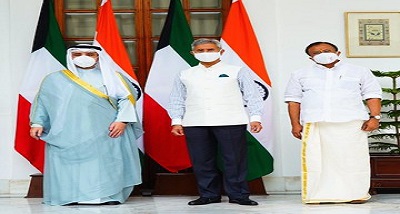 They also explored ways and means to impart further dynamism in the traditional and friendly ties between the two countries.

Sheikh Dr. Ahmed Nasser was on a two day visit to India.

Dr Jaishankar thanked the leadership and the Government of Kuwait for hosting a large Indian community in Kuwait and taking care of them during Covid-19 pandemic.

He hoped that Indian community will be able to resume travel to Kuwait in larger numbers soon.

He also expressed India’s continued support to Kuwait in its fight against Covid-19 pandemic.

Both sides emphasized the need to enhance cooperation in the area of health security.

India is amongst the largest trading partners of Kuwait.

There are significant opportunities for further strengthening and deepening ties in sectors such as energy, trade, healthcare, defence and security, science and technology, IT, cybersecurity, culture, education and tourism.

The two sides will also jointly celebrate the 60th anniversary of establishment of diplomatic relations between them during 2021-22.