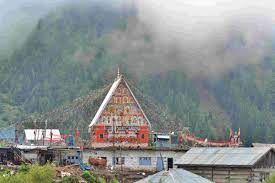 SRINAGAR: The annual pilgrimage to Machail temple in the abode of the Himalayan range of Paddar valley in Kishtwar district of Jammu and Kashmir has been cancelled for the third consecutive year.

Officials told that the annual yatra, which was scheduled to commence from July 25 has been cancelled in view of COVID pandemic.

“In view of COVID-19 Pandemic and in the larger public interest, annual Mata Machail Yatra in District Kishtwar, scheduled to start from July 25 has been cancelled. Yatra is going to be symbolic only. Traditional religious rituals will be performed following COVID appropriate behaviour,” Deputy Commissioner Kishtwar, Ashok Kumar told  KNO.

However, officials said that as large numbers of religious congregations are not allowed as per guidelines and SOPs in view of the Corona pandemic, it was expected that Machail Yatra called off anytime.

They said that earlier there was a plan to allow the pilgrimage, but as the COVID pandemic is not yet settled and the ‘Third Wave’ speculations are still doing the rounds, so keeping in view all aspects, finally the yatra has been cancelled,” the officials said. “Only traditional prayers and ‘hawana’ will be performed as per rituals.”

This has become third consecutive year when the annual pilgrimage has been called off.

In 2019 the yatra, for which Chari Poojan held on August 18 at Machail temple darbar, has been called off in view of the security situation arising after the abrogation of   Article 370 on August 5. In 2020, the yatra was cancelled due to the pandemic, and only Charri with a limited number of devotees was allowed to visit the Mata Machail Temple.

Machail Mata is a Goddess Durga shrine popularly known as Machail Mata being located in the village Machail, from where it derives its name, in the Kishtwar District of the Jammu region in India.

It may be noted that Goddess Durga is also known by the name Kaali or Chandi. The temple history is entwined with the conquests of Zorawar Singh Kahluria, who in 1834 sought blessings of Machail mata, before crossing the mountains and Suru River (Indus), with 5000 men for vanquishing an army of local Botis of Ladakh.

He became a faithful devotee after the successful mission. Machail Mata Sthan as the shrine is popularly known, has a landscape of unblemished beauty with hills, glaciers and tributaries of the Chenab River (Chadrabhaga). Paddar valley, nearby is famous for its world-famous sapphire mines and is a cool place for hiking, cannoning and holy hot springs.

Thousands of people visit the shrine every year, mainly from the Jammu region. The pilgrimage happens in the month of August only every year—(KNO)