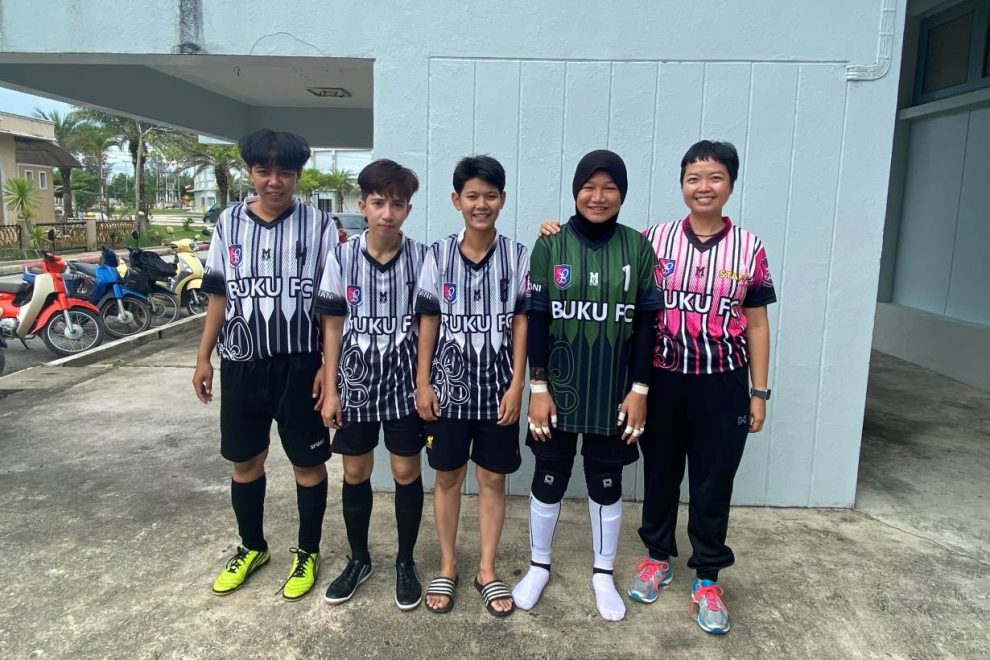 PATTANI, Thailand: Anticha Sangchai did not come out to her family until she was 30 and married with a child. It was her own struggle confronting the conservative community in southern Thailand that led her to create a place where women like her might feel more at home.

In the bookshop she set up in Pattani city, discussions on gender and sexuality led to the birth of Buku Football Club for lesbian, bisexual and queer (LBQ) girls and women four years ago.

Buku means book in Malay – and the club is now thriving.

Among six teams from three southern provinces, many players wore hijab and were cheered on by family in the stands.

That would have been unthinkable when she was growing up, Anticha said.

“Football is very popular in Thailand, yet not many girls play it – especially Muslim girls, who face more hurdles because many consider it a sin,” said Anticha, 43, who was raised Buddhist in the Muslim-majority province.

“Playing football allows them to be free, be themselves, and also helps them face up to the bullying and bias they face,” she said, watching a Buku FC team take on a rival team.

Thailand, a largely conservative Buddhist society, is known for its relaxed attitude towards gender and sexual diversity, with homosexuality decriminalised as early as 1956.

Yet LGBT+ people face widespread discrimination, particularly outside the country’s capital Bangkok, and are often rejected by their families, human rights activists say.

Like Safiyah Awea, 22, a member of Buku FC for three years, whose father is an imam – a Muslim religious leader – and had opposed both her playing football and identifying as lesbian.

So Safiyah left home, cut her hair short, and only wears a hijab at work and at religious functions.

“I don’t see a conflict between my faith and my lesbian identity or my playing football,” she told the Thomson Reuters Foundation alongside her team mates.

“But I don’t engage with people who question my belief, as their minds cannot be changed,” said Safiyah, dressed in shorts and a Buku FC jersey.

The Thai cabinet earlier this year approved a Civil Partnership Bill that would recognise same-sex unions with almost the same legal rights as married couples.

The legislation, which is awaiting parliamentary approval, would make Thailand only the second place in Asia to allow registration of same-sex unions, with couples able to adopt children, and with rights to inheritance and property ownership.

Young LGBT+ Thais have also been a big part of ongoing anti-government protests, pressing their demand for equality.

These are key to greater acceptance, said Anticha, who wants to marry her partner as soon as the law allows.

She and other LGBT+ campaigners favour an equal marriage law, which the government has shied away from, as it would require a change to the Civil Code to amend the description of marriage, now defined as between a man and a woman.

“Our goal is equal marriage at the end. But we choose to go step by step – like many other countries have done,” said Nareeluc Pairchaiyapoom, director of the international human rights division in the Ministry of Justice.

“It is a big change for Thai society. People will take time to understand and accept – and we need to reach a compromise with religious groups and others,” she said, without giving a timeline for the bill’s passage.

“The question of reconciling being Muslim and LBQ comes up often, and the takeaway generally is that they should have the right to be themselves, no matter what religious belief they have,” she said.

“In making my intention of marrying my partner public (on social media), I wanted to show the community you can choose how to live your life and live openly,” said Anticha, who teaches religion and philosophy at a university in Pattani.

The Buku FC club began with about 20 members, and now has more than 70. Members meet for three hours on Saturday and Sunday, except during the holy month of Ramadan.

Anticha and other staff also offer counselling for families if requested.

With two regional tournaments this year, which Anticha hopes will become a regular annual feature, Buku FC has secured the support of local authorities, as well.

“A tournament like this helps us reach the larger community, who otherwise don’t acknowledge or accept us,” she said.

“It is a chance for them to see how confident the girls are, how we are not that different from anyone else,” she said.

Fadila Ponsa, 16, is among the newest members of Buku FC, having joined just a month earlier.

“It feels very empowering to play football, and to be with other girls like me who are not straight,” she said.

“I don’t think Islam has a problem with girls playing football or being gay,” said Fadila, who wore a black hijab with coloured sequins, and shorts over black leggings.

For others in Buku FC, the tug of war between religion, their sexual identity and football takes longer to resolve.

“Islam does not allow my identity, and says it’s a sin. My family also think it’s wrong. But I want to be myself,” said Najmee Taniong, 26, dressed in shorts and a jersey.

“Being Muslim is who I am. Being lesbian and a footballer is also who I am. I don’t think there should be a conflict between these, or that I should be forced to choose between them.”