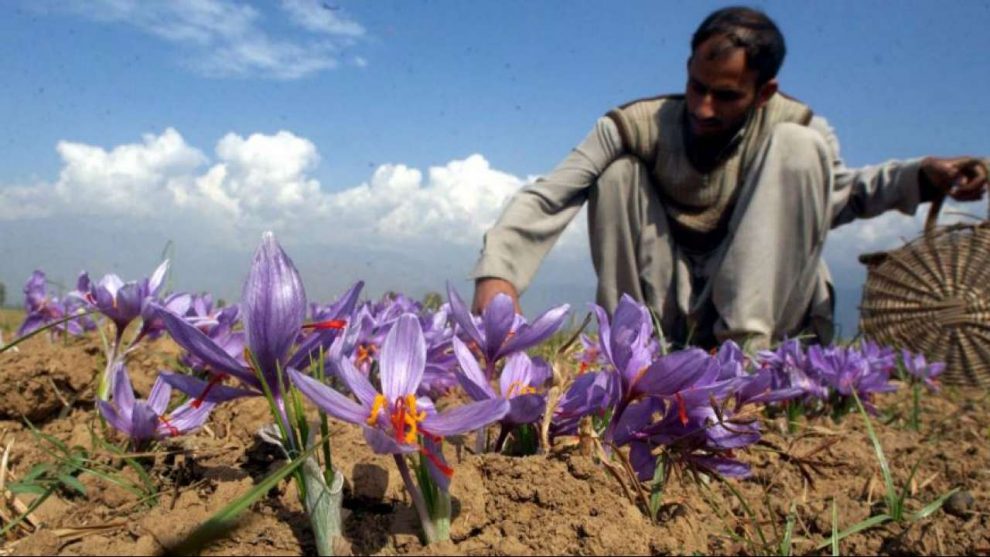 Dubai: With an aim to promote Kashmiri saffron, which recently received the geographical indication tag, in the Middle East, the Jammu and Kashmir government for the first time launched the spice in the UAE market.
A geographical indication (GI) is a sign used on products that have a specific geographical origin and possess qualities or a reputation that are due to that origin. Saffron produced in Kashmir was given the GI tag in July with the objective to put the Valley’s brand on the global map.
Jammu and Kashmir’s Principal Secretary (Agriculture) Navin K Choudhary launched the Kashmiri saffron on Tuesday at the UAE-India.
“I am delighted that for the first time, Kashmiri saffron has been introduced to the UAE market,î Choudhary said on the occasion.
Kashmiri saffron, also known as ‘Zafran’ in Urdu, is renowned globally as a spice with many medicinal benefits. It represents the rich cultural heritage of Jammu and Kashmir.
Choudhary said Kashmiri saffron was exported for the first time after it got the GI certification.
ìI am sure that its export will grow much more into Dubai and other cities of the UAE and elsewhere,” he said.
Consul General of India to Dubai and Northern Emirates, Dr Aman Puri and Kamal Vachani, Group Director of Al Maya Group were also present during the launch.
Earlier, addressing the summit, Choudhary said Jammu and Kashmir is undergoing transformation in the political and legal arena along with reforms in its economy.
The union territory is aiming to double its agricultural and horticultural produce through technological interventions and high yield plantations, he said.
Besides Al Maya Group, which has launched the Kashmiri saffron in the UAE market, the Lulu Group also sourced horticulture produce from J&K for the Middle East and has plans for procurement of apples, walnuts and saffron.
The company has already shipped 10 containers (200 tonnes) of three apple variants from the region to the Middle East market.
Choudhary is leading a 20-member delegation of businessmen and government officials from Jammu and Kashmir to the two-day food security summit, which started on Tuesday.
Organised by the Consulate General of India in Dubai in association with the Confederation of Indian Industries (CII) and Invest India, the event brings several key stakeholders from both the countries on one platform to share their experiences, deliberate on solutions and explore ways to further increase the collaboration in the food security sector.