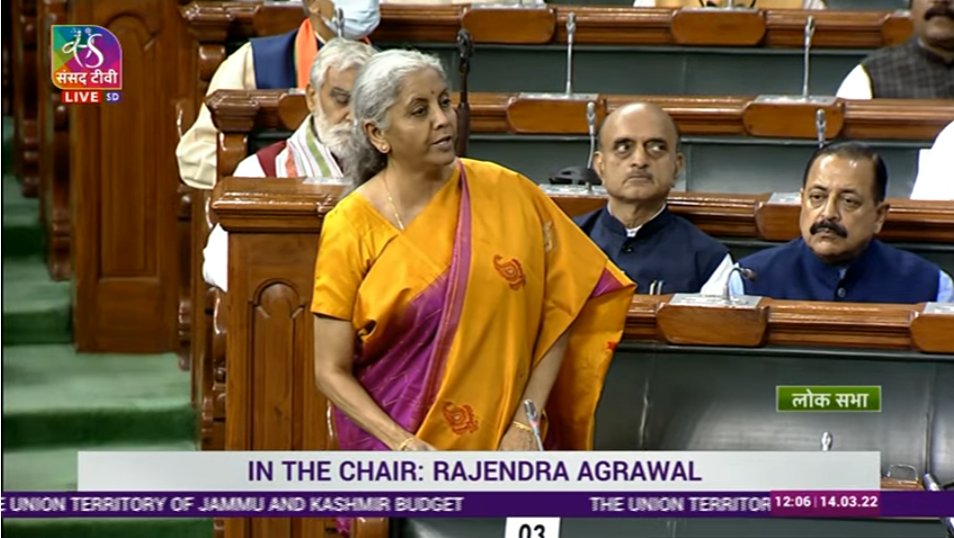 As per budget documents, the total expenditure for the next fiscal is estimated to be Rs 1, 12,950 crores.

Of this, capital expenditure will be Rs.41,335 crore and revenue expenditure to the tune of Rs.71,615 crore.

This was the third budget to be presented in the Parliament after the Centre read down Article 370 and reorganized Jammu & Kashmir into two Union Territories.

In her budget speech, the Finance Minister said the Union Territory of Jammu and Kashmir is poised to become the latest success story among other States/ Union Territories and model of socio-economic development for the country after the historic transformative changes in August 2019.

“The concept of One Nation, One Constitution and One Flag has been adopted in the Union Territory of Jammu and Kashmir. All unjust and discriminatory laws have been removed. Besides all the central laws as provided under “The Jammu and Kashmir Re-organization Act, 2019” have been implemented,” she said.

She said all sections of the people in Jammu and Kashmir are treated with fairness and equality. “The weaker sections of the society have been given suitable reservations in seeking government jobs. The persons discriminated for ages like Displaced Persons of Pakistan administered Jammu & Kashmir (PaJK) and Chhamb, West Pakistani Refugees, Residents of Border Areas and Kashmiri Migrants have been suitably empowered to get all the benefits,” she said that jobs for local youth have been protected.

The Finance Minister said after successful implementation of the 73rd and 74th constitutional amendment Act, and conduct of panchayat/urban local body, district development council & block development council elections, the main focus of the government is to empower these local body institutions with 3Fs (funds, functions and functionaries).

She said the objective of the government is to provide transparent, responsive and accountable governance.

“The Government of Jammu and Kashmir is focusing on unique initiatives of “Back to Village”, “My Town My Pride”, “Jan-Abhiyan” & “Block Divas” for bringing government programmes and initiatives at the door steps of the people,” the minister said.

Nirmala Sitharaman said a massive public outreach programme was conducted across Jammu and Kashmir with as many as 73 Union Ministers and various Parliament Committees visiting all the districts for public interactions and gathered grass-root level feed-back on government policies.

“Interactions were held with representatives of Panchayati Raj Institutions, other important stakeholders from trade, industry etc., over a period of two months which is expected to improve governance and implementation of various developmental schemes and initiatives,” she said.

The Union Finance Minister said that Union Territory of J&K has become the first among States/Union Territories in the country to have district good governance Index for assessing the efficiency of public delivery system at district level.

“This index is expected to foster transparency and accountability in the basic unit of governance and fulfill the aspirations of citizens. Best practices are being identified in each district for replication in others,” she said.

She also said that Jammu and Kashmir has emerged as a model for the entire country in the management of the COVID 19 pandemic.

“With 100% vaccination of the eligible population, Union Territory of J&K has crossed the 20 million vaccine dose mark. The vaccination in respect of 15-17 age group has been started all across the Union Territory and 100% target will be achieved soon,” she said.

The minister also talked about execution of projects under the PMDP and other schemes.

“The pace of execution of projects under Prime Ministers Development Package (PMDP) has been accelerated. Expenditure has reached to Rs.36,112 crore. 25 Projects have been completed / substantially completed and another 4 projects are likely to be completed by end of the current financial year,” she said.

She said during the current financial year 2021-22 already 25,446 works/projects under different sectors/schemes have been completed.

“The road connectivity is extremely essential for the development of any region. Till the year 2018, on an average, 1,500 to 1,600 kilometers of road length used to be constructed each year, the same has now more than doubled to 3,200 kilometers. Union Territory of J&K is marching ahead with its ambition of road to every village. With the availability of better road length & opening of Qazigund- Banihal tunnel now travel time between Srinagar and Jammu has reduced from 10 hours to 5 hours,” she said.

The Minister said Union Territory of J&K is all set to double hydroelectric power generation in next three years.

“Speaker sir, in Jammu & Kashmir only 3,500 MW of electricity has been generated since independence. By our efforts Union Territory of J&K is all set to double hydroelectric power generation in next three years. In this direction, 5 mega hydro power projects viz Ratle (850MW), Kirthai-II (930 MW), Sawalakote (1,856 MW), Dulhasti-Stage II (258 MW) and

Uri-I Stage-II (240 MW) with total capacity of 4,134 MW have been taken up for execution in collaboration with NHPC. The likely investment in these projects is Rs.34,882 crore and on completion will make Union Territory of J&K power surplus. The delay in execution of the projects has been eliminated and the pace of execution accelerated. On-going Hydro Electric Projects (HEPs) Kiru (624 MW), Kawar (540 MW) and Pakaldul (1,000 MW) are being developed through the Joint Venture and by 2022-23, major civil and electromechanical works of these projects will be completed,” she said.

The Minister also announced that all rural households, community centres and other government offices will be provided with piped water supply by August 2022.