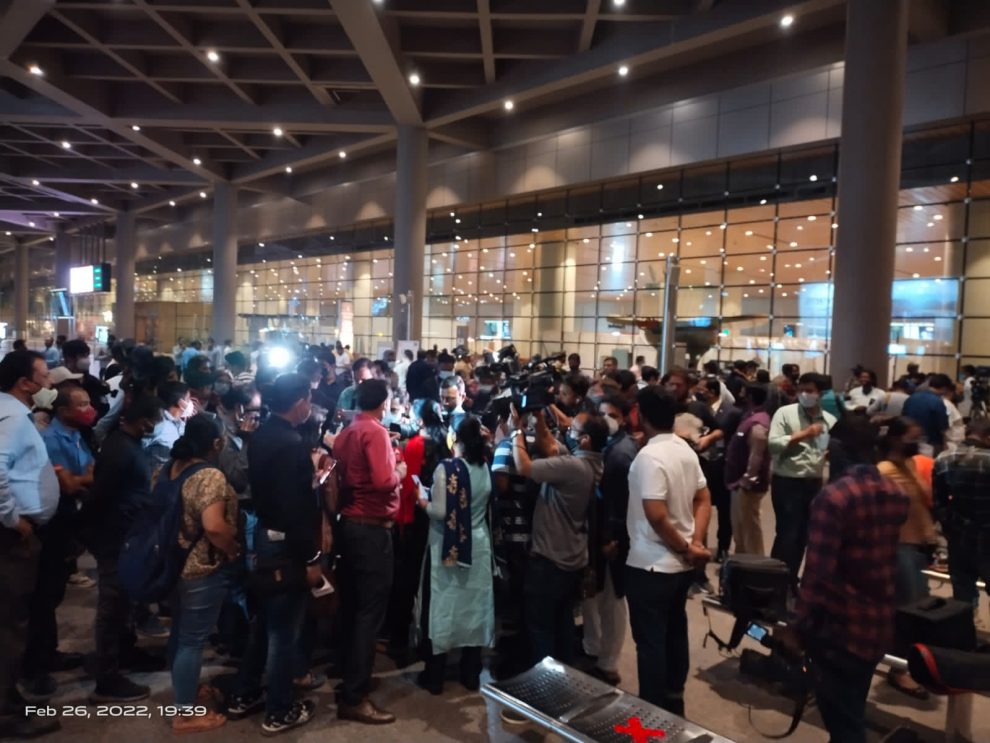 Mumbai: An Air India Express flight from Bucharest carrying 183 Indians stranded in Ukraine landed in Mumbai on Thursday, the airline said.
One of the evacuees said many Indian students are still stuck in Ukraine and that the problem is in the war-torn country’s eastern parts where the stranded people need assistance.
Another evacuee said it was difficult to get a flight to come back home and thanked the Indian authorities for facilitating their return.
“The flight with 182 passengers and one infant landed at Mumbai’s Chhatrapati Shivaji Maharaj International Airport from Bucharest at 5.40 am on Thursday morning,” Air India Express spokesperson said.
Union minister Raosaheb Danve welcomed the passengers as soon as the Air India Express Flight IX 1202 landed here.
The Air India Express is operating two more evacuation flights on Thursday via Kuwait – one from Kochi to Budapest (Hungary) and another from Mumbai to Bucharest (Romania), the spokesperson said.
Of these, the return flight from Bucharest is expected to arrive in Mumbai at 1.50 am Friday, while the flight from Budapest is likely to land here at 8 am on Friday, he said.
The eastern side of Ukraine has been facing a brutal Russian assault.
After landing here on Thursday morning, one of the students said, “The eastern side is where the problem is and people (students) there need assistance.”
Another student said while she managed to cross the (Ukraine) border, a lot of students were still stuck.
“So, I am praying that they also get out of there, she said.
It was difficult to secure a flight. Students were not getting flights, but then the Indian embassy helped us with that, she added.
Earlier, while interacting with passengers inside the aircraft, Danve said, “I have been asked by Prime Minister Narendra Modi to welcome you. There were around 17,000 Indians, including students, stranded there (in Ukraine) and the PM started ‘Operation Ganga’ to evacuate them.”
Around 4,000 to 5,000 Indians have been brought home so far from Ukraine and the operation will continue to bring back those still stranded there, the minister said.
The flight which arrived here on Thursday was the third evacuation flight operated to Mumbai from Bucharest to bring back Indians from war-ravaged Ukraine since February 27.
Of these, one has been operated by Air India and the other two by Air India Express, which is the international low-cost arm of now Tata Group-owned full service carrier.
Ukraine’s airspace is shut since February 24 and India has been evacuating its citizens by special flights from that country’s western neighbours like Romania, Hungary and Poland.