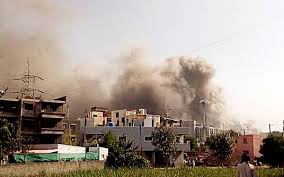 The major fire that broke out at the Pune-based Serum Institute of India’s building this afternoon has led to the death of five people. Pune Mayor Murlidhar Mohol said four people were evacuated from the building but after the fire was brought under control, five bodies were found by the jawans. The five people who died were suspected to be workers at the under-construction building.

The fire, which broke out at 2.45 pm on the fourth and fifth floors of the SEZ 3 building in the Serum Institute premises, was brought under control in two hours. A fire brigade official said, the cause of the fire is yet to be ascertained. A National Disaster Response Force (NDRF) team also rushed to the spot. Fifteen fire tenders were pressed into action and the fire was brought under control around 4.30 pm. Furniture, wiring and cabins were gutted but no major machinery or instruments were stored in the floors where the fire broke out.

Maharashtra’s Chief Minister Uddhav Thackeray has directed the authorities to ascertain the cause of the blaze that erupted in a building under construction of vaccine manufacturing major Serum Institute of India (SII)’s plant in Pune this afternoon. He also spoke to the CEO of SII about the incident and he will visit the site of the incident tomorrow afternoon to take stock of the situation. Maharashtra Deputy Chief Minister Ajit Pawar has directed an immediate investigation into the cause of the fire.

Maharashtra Health Minister Rajesh Tope said the fire was caused due to a welding spark while inflammable material aggravated the fire. Mr. Tope further said that the ‘Covishield’ vaccine storage is sited at a distance from the blaze and that it had not been harmed by the fire.

The Manjri facility, situated in the outskirts of Pune, is where the ‘Covishield’ vaccine is produced. SII CEO Adar Poonawala assured the government and public that there will be no loss of ‘Covishield’ production as multiple production buildings are kept in reserve to deal with such contingencies.

President Ram Nath Kovind said, the loss of lives in the fire accident at the Serum Institute of India in Pune is distressing. In his message, Mr Kovind said his thoughts and prayers are with the bereaved families. He hoped for speedy recovery of the injured.

Prime Minister Narendra Modi has expressed anguish at the loss of lives due to the unfortunate fire at the Serum Institute of India. In his message, Mr Modi said his thoughts are with the families of those who lost their lives. He hoped for the speedy recovery of those injured.