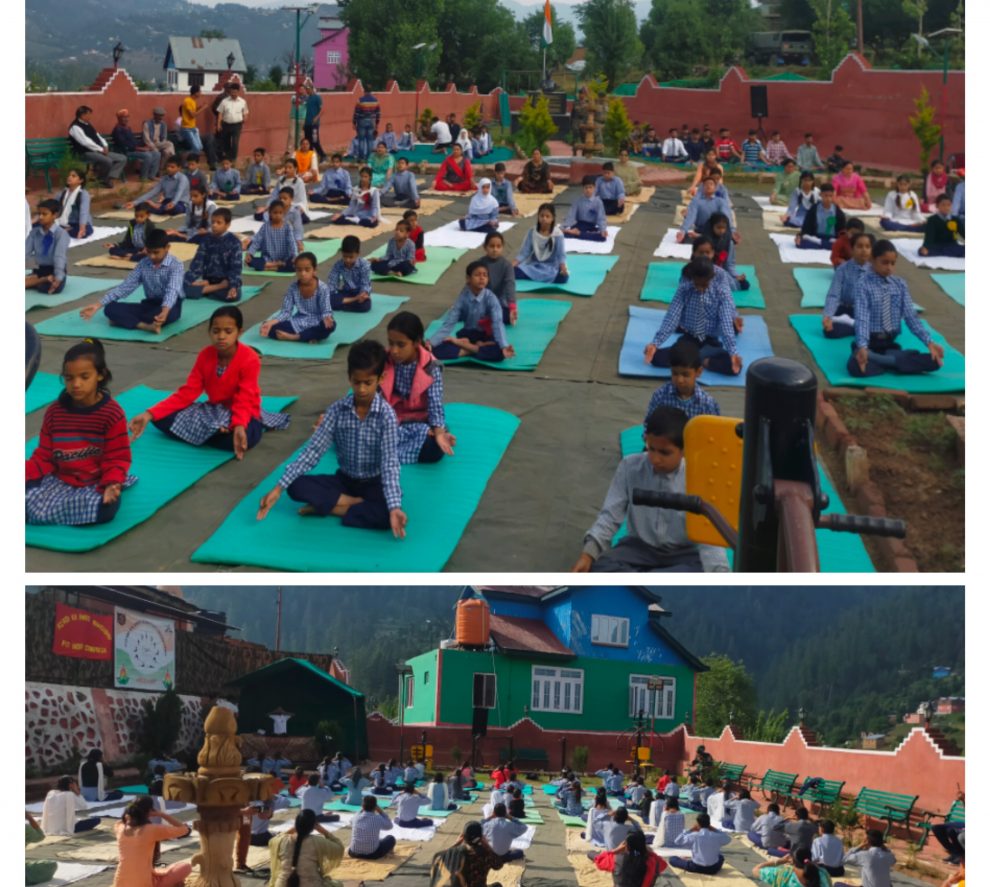 JAMMU: Indian Army’s Rashtriya Rifles 4th Battalion based at Bhaderwah organised Yoga workshop for students, Villagers and Jawans at Shaheed Chunni Lal park at Khalleni of Sub District Bhaderwah.
In order to contribute to the Nationwide “Fit India” campaign and to bring the villagers, students and jawans in its ambit, Rashtriya Rifles Unit( 4RR) based at Bhadarwah organised a yoga workshop session in Shaheed Chunni Lal park at Khalleni in which a large number of participants took part.
Leading 45 minutes “Yoga practice Session” Faizaan Ul Haq from Directorate of Ayush J&K Druddu Center who was the instructor on this occasion demonstrated different Assanas and congregational steps for collective performance of the participants.
The Yoga instructor initially briefed about the essence of Yogic exercises and their importance. “The mission of the Movement is to bring about behavioural changes and move towards a more physically active lifestyle,” he observed.
Prominent among those who were present on this occasion include the family members of Martyr Naib Subedar Chunni Lal, Sarpanch Bahra Sohtha Kiran Devi beside sarpanches and panches of the adjoining panchayats as well as prominent citizens.
Notably, “Fit India Movement” was launched on 29th August, 2019 by Prime Minister with a view to make fitness an integral part of daily lives.
“Healthy man means healthy family which ultimately leads to healthy society”, used to be the main theme of the mission.
Equally mentionable is that on the occasion of 114th birth anniversary of Major Dhyan Chand-India’s hockey legend, India witnessed the launch of the “Fit India Movement”.
In his speech PM had used examples of China’s “Healthy China 2030” and Germany’s “Fit instead of Fat” programmes to emphasize the interest of the international communities into a healthier lifestyle.
The campaign was a four-year plan; which is running on different fitness related topics every year. First-year of the movement focused on physical fitness; for the second, third, and fourth-year eating habits, environment-friendly lifestyle, and preservation from diseases would be the topic of a central focus.
The Fit India Movement is aimed to popularize the culture of sports and fitness in the country. It encourages people to prioritize fitness in their day-to-day lives.
The Dispatch is present across a number of social media platforms. Subscribe to our YouTube channel for exciting videos; join us on Facebook, Intagram and Twitter for quick updates and discussions. We are also available on the Telegram. Follow us on Pinterest for thousands of pictures and graphics. We care to respond to text messages on WhatsApp at 8082480136 [No calls accepted]. To contribute an article or pitch a story idea, write to us at [email protected] |Click to know more about The Dispatch, our standards and policies