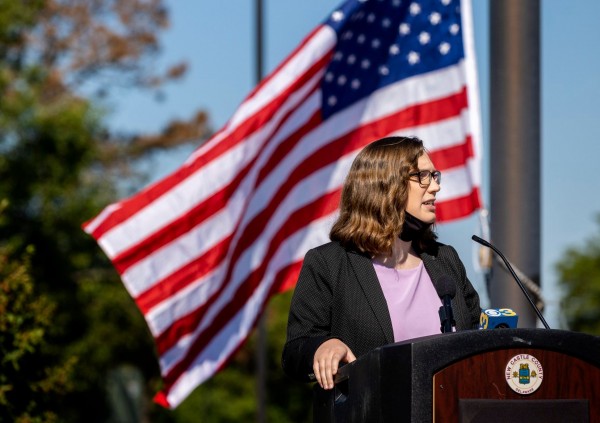 NEW YORK: LGBT+ activist Sarah McBride hopes her election as the United States’ highest-ranking transgender lawmaker will send a “reassuring message” to young LGBT+ Americans that they are represented – and can aspire to public office too.

“I know how much of a difference it would have made to me to see this news,” said McBride, 30, a Democrat who was elected to serve as a senator in Delaware – also the home state of President-elect Joe Biden.

“A healthy democracy includes a diverse government and we can’t craft solutions for a diverse community if the full diversity is not reflected at the table,” she told the Thomson Reuters Foundation in a phone interview.

McBride’s election came as a liberal “blue wave” that had been predicted by some commentators failed to materialize, and Republicans look set to retain control of the U.S. Senate and chip away at the Democratic majority in the U.S. House.

A former spokeswoman for LGBT+ advocacy group the Human Rights Campaign, McBride said she feared a divided U.S. Congress would block measures to advance LGBT+ rights such as the Equality Act.

The legislation, which would outlaw discrimination against Americans based on their sexuality and gender identity, was approved by the House in 2019, but stalled in the Senate. Biden has promised to make it a priority.

“There’s no question that our democracy is facing tensions and stressors that put the health of our system at risk,” McBride said, noting that whether or not the bill passes at a federal level, state legislatures can also boost LGBT+ rights.

“State legislatures from the start of this country have always been intended to serve as laboratories for bold ideas,” said McBride.

“That means passing explicit non-discrimination protections in the states that have not yet done that. It means making sure that we expand healthcare coverage to more and more people,” she said.

McBride, who will also become Delaware’s first openly LGBT+ lawmaker, has clocked up a long list of firsts during her 14 years in politics and activism, a career that started with an internship with the president-elect’s late son, Beau Biden.

During Barack Obama’s presidency, she became the first transgender White House intern, and rose to national prominence in 2016 when she was the first trans person to address the Democratic National Convention.

As an activist, McBride successfully lobbied the Delaware General Assembly in 2013 to pass state legislation that bars discrimination on the basis of gender identity.

She said advancing further such legislation at the state-level and ensuring positive changes for her all of her constitutes, including LGBT+ Delaware residents, was what motivated her – not breaking more glass ceilings.

“I didn’t run to make history or make headlines. I ran to make a difference in my community,” McBride said.

“The importance of being a first is to make sure that you’re not the last and that others can stand on your shoulders.”

2nd phase of Exercise Malabar 2020 to be conducted in Northern Arabian Sea from tomorrow
Digital media outlets must bring down FDI to 26% by Oct 2021: I&B Ministry
Comment