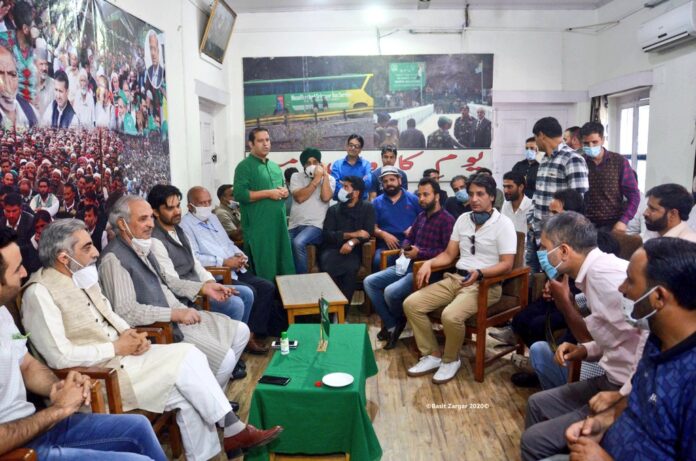 Srinagar: Declaring that fight against attempts to bulldoze Jammu and Kashmir’s identity and rights will continue uncompromisingly, Peoples Democratic Party (PDP) strongly criticized Government of India (GoI) in dealing with the issues here and elsewhere and asserted such a practice will not be tolerated.

” On one hand BJP is participating in dialogue with Afghan Taliban, talking reconciliation with China’s PLA who have invaded Ladakh and discussing with Nagaland insurgents desperate constitution and Flag , but at the same time using anything but dialogue to deal with the mess created by them after illegal scrapping of special status if J&K.

This is unacceptable,” a spokesman of the party said in a statement after holding youth PDP meeting for the first time after August 5 last year.

The Party reaffirmed its pledge to continue fighting for the aspirations and rights of people of Jammu & Kashmir and resist by all democratic ways the onslaught by the central government.

In the first ever meeting of its youth wing after August 5, 2019 at its party headquarters in Srinagar, the party emphasized that the constitutional fraud perpetrated on the people of J&K and the subsequent bulldozing of constitutional rights will always remain unacceptable and would be fought uncompromisingly.

The meeting was presided over by Party Vice President A R Veeri and Party General Secretary G N Lone Hanjura and addresses by Former Legislator & District President Muhammad Khurshid Alam, Party youth wing President Waheed ur Rehman Parra and Former legislator Aijaz Ahmad Mir, all of whom stepped out of their homes for the first time since they were detained on August 5, 2019.

Speaking on the occasion Veeri said that in these tough times we need to sustain unity, ignite the embers of hope and be steadfast and resolute in our endeavors in order to protect our rights and dignity .

“We reject undemocratic treatment imposed by ruling regime, which has hundreds of our youngsters unjustifiably held in jails, despite huge risks to their lives because of Covid-19 pandemic. Our voices have been ignored, our institutions erased. We cannot afford to remain silent any longer. We need to speak now to restore our dignity and take charge of our own destinies,” the meeting observed.

Addressing the meet Hanjura recounted the million moments of ordeal that people of J&K have had to go through and the underlined and appreciated the valiant resilience shown against all odds.

“Jammu and Kashmir has seen many lockdowns and crises. And each time we have shown that we can survive and stand with one another. We have demonstrated to the world a unique capacity to resist. Reiterating party’s resolve to put People’s aspirations first former legislator and District President Srinagar Mohammad Khursheed Alam said that no amount of coercion can subdue and suppress our movement to safeguard the rights of people of Jammu & Kashmir.

“We demand an immediate end to ruling regimes denial of the political problem. Our people have endured a brutal clampdown and the world’s longest internet slowdown,” said Youth wing president Waheed ur Rehman Parra .

Meanwhile, Hanjura talking to reporters said he gave slip to security personnel posted at his residence and travelled from his house to party headquarter without any security in a private vehicle.

He said after the minister informed the Parliament yesterday that no one is under house arrest, I tried to leave my house to attend the meeting. However, he alleged that he was stopped by security guards posted at his residence. But, Hanjura, who also posted a video on social media, said he gave slip to guards and travelled in a private car without any security to party office.

Newsfeed The Dispatch Staff - September 19, 2020
From zero manufacturers in March this year, as many as 1,100 indigenous manufacturers of PPE kits have been developed by the government...