Editor’s Note about the story:
Arupa Patangia Kalita’s fiction has depicted insurgency in rural Bodoland and the rest of Assam with immense sensitivity. In this story, in the middle of communal riots and violence, Jatin is on his way to his Bodo friend’s house for Christmas, a long tradition that he is resolute to continue despite the tense political situation. He leaves against his family’s and friend’s wishes, who warn him against possible imminent danger in the Bodo village. The story is a sensitive commentary on how daily conversations of dominant communities criminalize tribals and minorities through othering, and how, in the end, common humanity thrives due to sustained relationships between people. Like all stories in the collection “How to Tell the Story of an Insurgency”, the story reminds us how fiction can rejuvenate conversations about justice and human rights. This story has been translated from the Assamese by Rajarshi Kalita & Mukuta Borah.

Jatin looked at his mom, as always, when he was about to wear his socks. No, his mother wasn’t yelling at him, her nose wrinkled in disgust. ‘I guess you have grown up enough to at least wash your socks yourself.’ His mother, always tidy and neatly attired, would hold her nose tight just at the sight of his socks, even if they had been freshly laundered. He would laugh. Today, she was looking at him with clouded eyes. She hadn’t combed her hair; the strands were lying in disarray.
Having put on his shoes, he donned his jacket and stood in front of the mirror. He sprayed some perfume on himself, purposefully using more than required, from his sister’s perfume bottle. His sister stood motionless, scraping a betel nut. She did not swoop down on him, no; she didn’t shout, ‘I got this bottle after so much of pleading and imploring! Was it to waste it on your slovenly, filthy rags?
His father wasn’t asking either, with the customary clearing of his throat, ‘Moina, is Jatin going anywhere?’

Jetuki, the helping-hand of the house, who would be usually humming something or the other, was also silent. He wanted to whistle at the parrot inside the cage, but didn’t. The parrot was standing on one leg, looking despondent and miserable. Jatin felt uncomfortable. He felt like shouting at the top of his voice, shaking the people standing around like statues.

Finally, he did shout out, ‘I will go! I visit David’s house on Christmas every year. Why should I not go this time? Didn’t he invite me himself?
His father put aside the newspaper he was holding and tried to explain to him in a low, measured voice, ‘David and you have grown up together. Have I ever restrained you from meeting him?’
Jatin grumbled recalcitrantly, with his eyes down, ‘Why are you then stopping me today?’
His mother snivelled and wiping her eyes with the corner of her anchal looked towards him, ‘Don’t you already know it? They killed their own people in their village and left them lying on the railway track, all in broad daylight.’
Jatin sat with his back to his mother. He knew that if he now looked at her teary eyes, her sad face beneath the cascade of her open hair, his decision would fall apart right there.
‘Jayanti went under police escort to appear for her examination. Just because of that, her own people killed her, just based on a suspicion. To you … ’ His sister’s voice dropped down to silence, throttled by fear.

He grabbed the chance to get back at her and shouted out, ‘What do you mean by “her own people”? Is the family of David not our own people? Who helped us last year when Ma was languishing in the hospital? You have been promoted to the eighth standard, and you have already learnt to recognize our people and their people?’

His father’s low voice spoke. ‘Son, you are right. Who shall I call my own people if not David’s father? Your maternal uncles who have not set foot on this yard for the last six-seven years? Or your paternal uncles who don’t care to send a letter even once a year?’ It was impossible to debate against the calmness of the tone, the love dripping from the voice of his father. He stood there, his eyes rooted to the ground.
It was as if his father wasn’t talking. It was as if the sturdy man was hiding his face and crying. ‘How can I forget that day? Tell me, son, how can I forget?’

‘Father, that day belongs to a particular era – unnatural times designed by particular people.
His father looked up at him.
‘Father, the ruling class has always divided the people into factions for their own needs, but does that stay permanently?’
He looked at the half-grey beard and hair, the slight paleness of his father’s face. His father was getting old. He spoke in a firmer voice, ‘Father, you aren’t going to be here forever. I will have to live with David and his people.
His father got up, ‘Go, son. You have grown up. You have learnt to differentiate the good from the bad.’
When he was about to shut the gate, he distinctly heard his mother sobbing and saying something to his father. He did not stop. He stepped on the gravelled road.
The road ended at a crossing. Several buses were running on the tarred road that went towards the town. He waited for some time in front of Ramu’s shop under the banyan tree right at the crossing. Four paths went their separate ways from this banyan tree. The tarred road towards Tangla, the wide gravelled road towards his village, another road came from Tezpur, and the narrow path with fields on both sides went towards David’s home.
‘Jatin? When did you return from the hostel?’
‘Guwahati seems to be suiting you.’
‘Come and have Ramu’s piping hot pakoras.
A few lively voices, all speaking over each other, made Jatin turn towards Ramu’s shop. Utpal, Jiban and Ratul were enjoying cups of tea. He joined them. Taking a glass in his hand, he said, as if to himself, ‘One could not even imagine having tea here just four months back.’
All of them turned sombre immediately. Their faces, otherwise vibrant with the radiance of youth, lost their glow. All of them looked at the hole in the ground beneath the banyan tree. The hole, half filled with betel-nut peelings, paper, dust and soil, looked like the mouth of a terrible tunnel. As if a little way down lay a hellish world where people could not breathe, speak, eat, or sleep. It was a world where people cut and killed each other, engendering streams of blood; where people became animals. A deafening, terrible, ear-splitting sound emanated from the cavity. Pieces of human bodies, the smell of blood, cacophony. That hole could not be covered over with betel-nut scrapings, soil and dust. That abyss had wedged itself into the soft young hearts.
Jatin kept his glass down and got up to leave after paying Ramu.

Utpal placed his hand on Jatin’s shoulders and said, ‘Won’t you stay some more time? Tell us about your experiences in Guwahati. Have you written any new poems meanwhile?’

Ratul lit a cigarette. ‘Jatin, I often recite that poem of yours: There aren’t any humans here/The fish of the human mind survive/On the cold hardness of ice.’
Jiban held onto Jatin’s hands. ‘You are living in new surroundings now. We are all surrounded by cloistered air; why does it happen like this, Jatin?’
Jatin got up to leave. ‘I have to go. It’s getting late.’
‘Where are you going?’ Utpal didn’t want to let Jatin go.

‘I am going to David’s home. For Christmas. Were you not invited?’

It was as if Jatin had said the world’s strangest words. All of them shrouded him with incoherent talk.
‘Are you going to the village of the kacharis?’
‘We can hear the sound of bomb explosions from their village every day.’
‘You won’t be able to return.’
‘David had invited us too, right here at Ramu’s shop yesterday. Who knows what evil design might be lurking in his mind.’

It was almost a ritual – every Christmas all of them would go to David’s home and stuff themselves with chicken, steaming hot tekeli pithas, boiled eggs, curd and puffed rice. David too would visit all their homes when it was Bihu, eating and celebrating so much that he had to concede that he could not eat anymore. Had it all changed so much in three months that David would invite them with sinister designs in mind? What would he do with them? Would David’s father – whom he called bor-pitai or elder father – charge towards them with a machete? Would bor-ma poison their tekeli pithas? Or would David himself throw a bomb at them? Or would David’s kid sister throw chilli powder in their eyes and leave them vulnerable and weak before killers?

‘Nonsense,’ Jatin laughed aloud. ‘You can visit him later. I am leaving for Guwahati tomorrow.’
Jatin stepped on the narrow path. There was a small and tidy thatched cottage right at the beginning of the trail. A wooden cross hung on top of the threshold. David would always cross himself at this point. It had been just two years since Jatin left for Guwahati. Both had traversed this path quite a few times in the eighteen years before that. 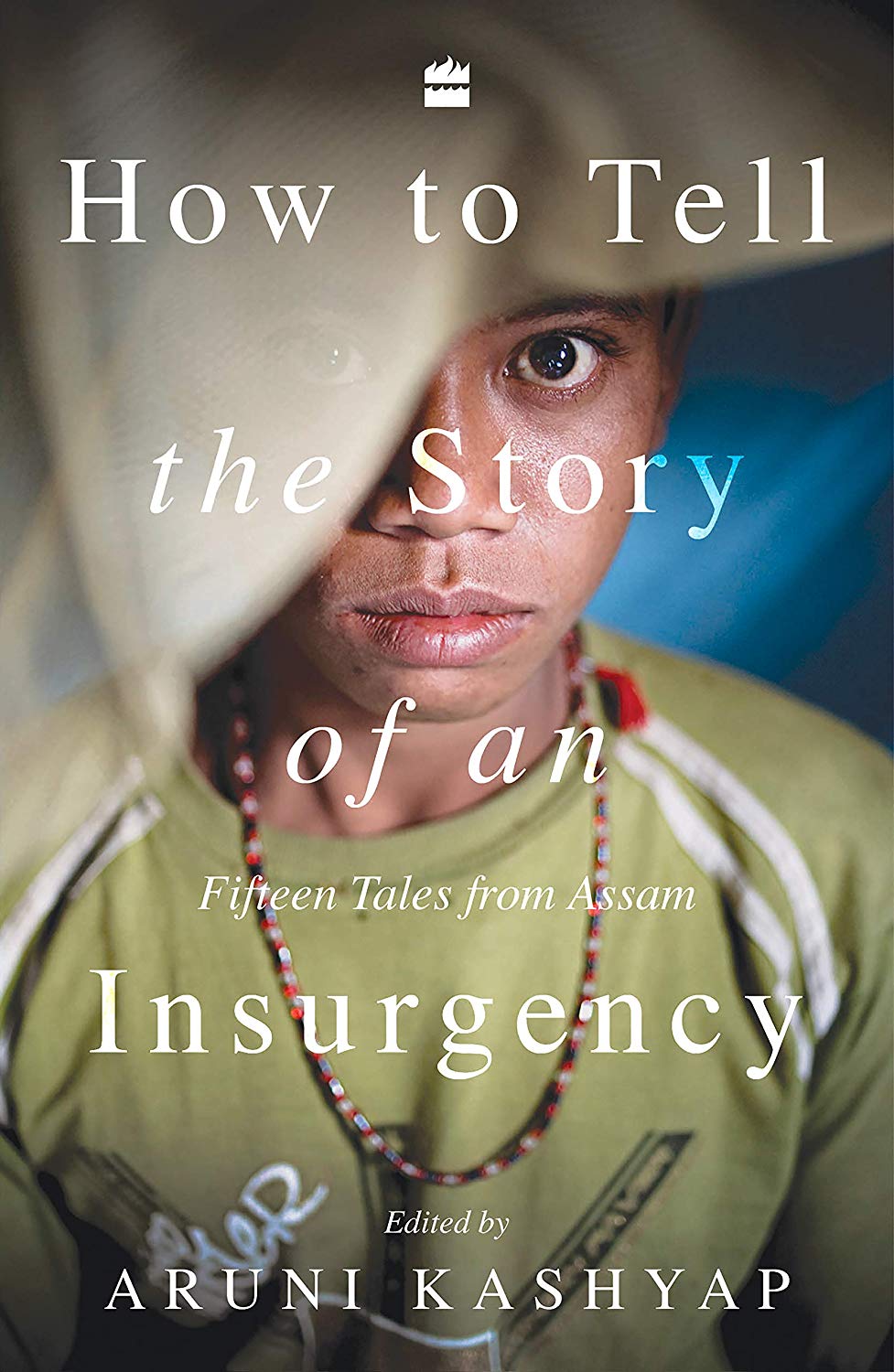 Excerpted with permission from the story “Our Very Own” by Arupa Patangia Kalita, translated from the Assamese by Rajarshi Kalita & Mukuta Borah. This story features in the book How to Tell the Story of an Insurgency: Fifteen Tales from Assam, edited by Aruni Kashyap, HarperCollins Publishers India. Read more about the book here and buy it here.

Here is the Longlist of the 2020 International Booker Prize
Dharini Bhaskar's novel delves into themes of women's autonomy and uncommon love: Read an excerpt