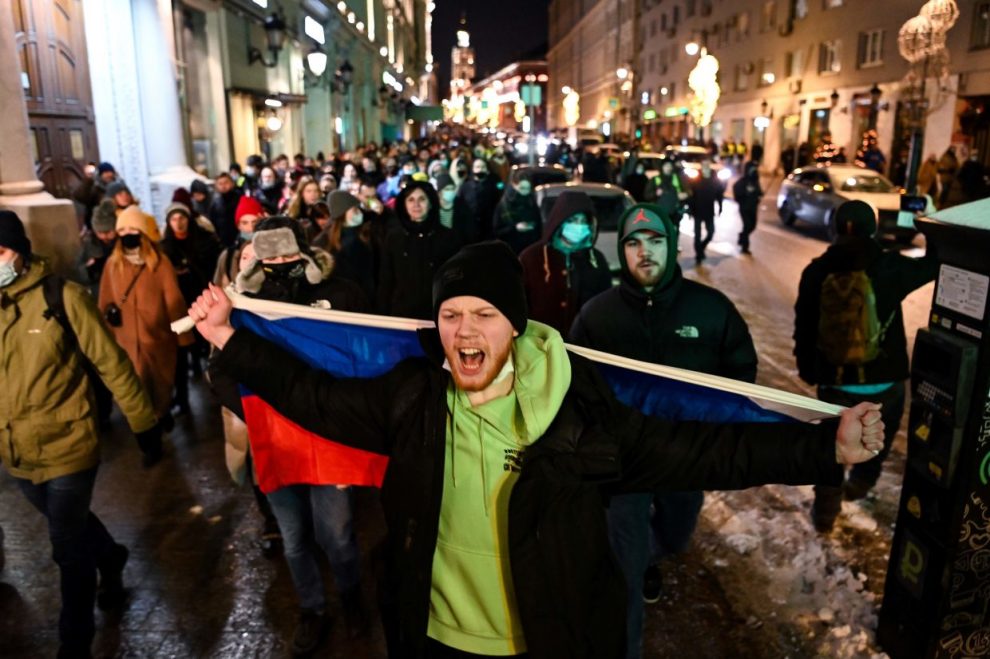 With more than 105,000 cameras, Moscow boasts one of the world’s most comprehensive surveillance systems – which authorities say has helped cut crime and enforce coronavirus lockdown restrictions.

Yet, since the system became fully operational last year, rights activists have noted that cameras have been used to monitor political demonstrations, with a lack of clear rules allowing for abuse of the system.

Those concerns were renewed this week, after two straight weekends of nationwide protests.

Alexander Karavaev, a lawyer with Moscow-based human rights group Agora, told the Thomson Reuters Foundation that several of his clients were brought in for questioning on Jan. 31 after being picked out by cameras in Moscow.

Among them was Mikhail Shulman, the husband of renowned political scientist Yekaterina Shulman, who was stopped at a metro station after he and his wife approached officers to inquire about transportation closures, said the lawyer.

“They (police) explained that the ‘face control’ system installed on the subway cameras had worked,” he said, adding police told him the system was normally used to identify people who have committed a crime.

“To my arguments that the Shulmans were definitely not criminals, they could not answer anything, saying that they were just (doing their job),” the lawyer said.

Authorities have said that the police’s heavy-handed response to the demonstrations, which saw thousands of arrests across the country, was justified because the protests were illegal and unauthorised.

Anastasiia Zlobina of Human Rights Watch, said that “while the authorities continue to deem peaceful unsanctioned protests illegal, the evolving technology at their disposal will keep facilitating the crackdown against such protests.”

“Using such technology to prosecute peaceful protesters at the opposition rallies violates the freedom of assembly and amounts to a discrimination based on political views,” said the coordinator for Europe and Central Asia.

Moscow’s Department of Technology, which manages the surveillance system, said in an emailed statement it operates in strict accordance with Russian laws and referred questions on the use of cameras to law enforcement agencies.

Moscow’s police did not reply to a request for comment.

Shulman was held for three hours and questioned about the rallies as a witness, before being released with no charges brought against him, Karavaev said.

The case was not isolated, said the lawyer, adding he also represented a 21-year-old woman who was detained after being spotted by cameras at a metro station.

Similar accounts have been shared on social media.

Photojournalist Georgy Malets wrote on Facebook last month that he was held at another metro station after receiving a call from police warning him that he had been registered as a “political figure” for taking part in an earlier rally he attended for work.

Earlier this week, TASS news agency quoted a law enforcement source saying facial recognition had been used to detect participants at a rally on Jan. 31 and detain people who took part in earlier unauthorized demonstrations ahead of the event.

Digital rights activists say that current regulations do not clearly define how and when police can access the cameras nor do they establish mechanisms for judicial or public oversight.

Last year, a Moscow court ruled that the city’s facial recognition system does not violate the privacy of its citizens, dismissing a lawsuit brought by activists seeking to ban the technology’s use at mass events and protests.

The case is now with the European Court of Human Rights.

Navalny, 44, was arrested on Jan. 17 after returning to Moscow from Germany where he had been recovering from a nerve agent poisoning in Russia last summer. He accuses President Vladimir Putin of ordering his murder, which the Kremlin denies.

On Tuesday, a Moscow court sentenced Navalny to three and a half years in jail for parole violations he said were trumped up to sideline him.