Peru began its tryst with Indian cinema, or cines Hindu as it’s known, in the early 1950s. Unlike other markets where Bollywood is popular, Egypt or Nigeria for example, Peru has neither historic ties with India nor a sizable NRI population. Until 1963, the two countries didn’t even have diplomatic relations. Fifty-six years later, there hasn’t been any significant bilateral business or political cooperation between India and Peru. Though the steel magnates Tata set up shop in 2010 and trade is set to grow, the momentum is still relatively slow. According to the Indian Embassy, no more than 400 Indians live in the entire country.
Two films, 1954’s Mendigar o Morir, Boot Polish in the original Hindi, and the 1957 classic Madre India, kicked off Lima’s love affair with Bollywood. At the time, there were two cinema halls that showed Indian films regularly, City Hall and Metropolitan. A third, Colosseo, had screenings too, and along with Metropolitan was in a poorer neighborhood than the more centrally located City Hall. Not only were the Bollywood classics instant blockbusters, but Madre India was screened especially on Mother’s Day as well as during Holy Week. “You can understand Mother’s Day,” Professor Ricardo Bedoya, Peru’s most eminent film critic, told me as we sat in his apartment overlooking the Malecon, “but what’s interesting is that during Semana Santos, people here feel you don’t go to the movies to have a good time but to suffer, to feel empathy with the suffering of Christ.”

It was mainly poorer Limenos who flocked to those three cinema halls, migrant laborers and women who left their homes in the Andean highlands to come and work in the capital. The films are easy to understand, they don’t condescend to their audience and are built around the nobility of suffering and the valor of the poor and dispossessed. Boot Polish was produced by Raj Kapoor but it was the arrival of El Joker (Mera Naam Joker) in the 1970s, a Kapoor starrer, that truly cemented Peru’s affinity with cines Hindu.

Even though Peru has a sizable population of Japanese and Chinese who migrated to the country in the late 1800s, East Asian cinema—except for the kung fu movies of the 1970s— never really made a dent here. Bollywood’s themes, on the other hand, “have a connection with the imagination of Andean people,” Professor Bedoya explained, “family relations, themes of family disintegration, the city and migration, the moral of sacrifice as personal redemption.” It is the Andean belt—Peru, Ecuador, Bolivia and Colombia—that make up the Bollywood watching base of South America, and not the payeses blancos. The more European Argentina, Chile and Uruguay are neither as amenable to Indian cinema’s themes nor do they see themselves reflected in the films visually. Peru’s indigenous population, with their dark brown skin and mestizo features, look Indian. A lot of young men in Lima, with their straight black hair cut in flat-brush style, appear as though they asked their barber for a Shah Rukh.
“We are a post-colonial society, so we have racism incorporated,” Felix Lossio, the young director of cultural industries at Peru’s Ministry of Culture and author of a book on Bollywood’s popularity in Peru, told me. Cholo is a pejorative term but still widely used to describe Andean men. The notion that someone from the Andes could wear their traditional dress proudly in the city was a strange one, Lossio continued, and though society isn’t segregated, young Andean men were still routinely discriminated against. In Peru’s boutique cinema industry, the characters are largely urban and white. You might get a creole character every now and then, but that was it.


At the time I was in Lima, La Paisana Jacinta, a crude and racist comedy where Jorge Benavides, a white actor, dresses up in brown-face drag to portray a backward Andean campesina, was in the cinemas, infuriating many. The non-European, Andean population associate Hollywood with sex and violence, Lossio explained, whereas many of the indigenous Peruvians he interviewed for his book felt that “Bollywood movies showed them that they could hang a picture of a rural scenario or a llama on their walls, because basically they were migrants from those rural areas, without any shame. Indians are wearing saris, for example. They could be cosmopolitan and urban and successful but wear a sari and have a traditional way and even dance to traditional music.” That, Lossio declared, was impossible to see in films coming out of Lima.
Join 'The Dispatch' on WhatsApp.

Peru’s “guilty machismo” as Professor Bedoya called it, stemming from its strict Catholic culture was another reason for the country’s attraction to Bollywood. All around Lima were black and red billboards: Peruvians against machismo, they read in big block letters. The country has some of the highest femicide numbers in South America. Since 2013, Peru has ranked a global third in the highest number of complaints regarding gender violence according to the World Health Organization, behind only Ethiopia and Bangladesh.

“In Hollywood, a woman who has been cheated on by her husband, Barbara Stanwyck or Joan Crawford, what would they do?” Professor Bedoya asks. “They would get revenge. She will be a millionaire and when she’s at the top, she will destroy him.” The professor, a tall man, bald on the crown of his head, slices the air with his hand dramatically and then pauses. He leans forward in his chair. “But that doesn’t occur in Latin American cinema. In Latin American movies, the woman is born to sacrifice herself for sadness. Dolores del Rio is an icon, a Mexican actress. There’s a movie called The Abandoned by Emilio Fernández, and this is the archetypal movie about women, which remains till today: a woman who is about to be happy is betrayed and then begins her fall which includes extreme poverty, prostitution, suffering and sacrifice because of a man who is her son. She loses her life, but she saves her son.
“There are no happy sides to these movies,” the professor laments, “only melodrama and suffering.”
“Neither in Bollywood,” I say.
He shrugs. “At least you have singing and dancing.”

Bollywood fan clubs in Peru operate a little like the gangs in West Side Story (minus the knives). Each club has its own codes, insignia and rules and they maintain a fierce rivalry between each other. There are subcultures of dance groups, film appreciation societies, and unlimited fan clubs. Dhanush, the Tamil actor and singer, has one, Kajol (they pronounce her name Ka-yol) too; even lesser stars like Preity Zinta, who hasn’t had a hit film in years, can rally a cluster of admirers in Peru.

Of all the local SRK clubs, however, only two are run as conglomerates: Shah Rukh Khan Fan Club, known as FC, and the Khan-blessed SRK Universe. FC is older and affiliated with a group run out of Chennai while SRKU runs in coordination with Muhammad Ashraf, its young founder in the Maldives and his “CEO’ in Michigan. When you ask the groups in Lima about each other, they reply politely, but through clenched teeth. FC is more middle class, filled with mostly young female professionals who work in NGOs, hospitals and hotels. A few FC members have traveled to Mumbai for Khan’s birthday—the trip costs between three to four thousand dollars, a prohibitively expensive amount for SRK Universe members, who live further away, on the outskirts of Lima, venturing less into Miraflores and the posh districts of the city. The single female members of FC might comfortably attend events at the Indian embassy in San Isidro, whereas SRK Universe doesn’t have the same level of contact or comfort with Lima’s diplomatic circles. Instead, their members are made up of families, mothers and daughters, nuclear cells of parents and grandparents, who attend meetings together. All the fans that I meet are indigenous Peruvians, not one person is white.
Bollywood in Peru is not an elite interest. It belongs to the struggling and the aspirational who see their battles mirrored in the brutal, unforgiving landscape of India’s classic cinema, from the 1950s onward to the 1980s, where dreams are broken by destiny, wealth is no protection from the whims of gods and even the powerful are at the mercy of the stars. Since the advent of neo-liberalism in the 1990s, however, Bollywood’s excessive materialism mimics Hollywood’s. No longer is the hero an honest villager fighting a corrupt system, now he is a multinational brand consultant with a Rolex whose parents celebrate their wedding anniversary by taking a hundred of their closest friends on a Mediterranean cruise. But even these pornographic displays of wealth and luxury don’t put off Lima’s working-class audiences. There is something acceptable, even exhilarating, about a brown man who makes it big.
The odds are still crushingly stacked against him and unlike Hollywood, his fall can still be bloody. There is often no happy ending; the system—no matter your riches—will not vindicate you. You might still die a pauper, you do not have the pursuit of happiness enshrined in the constitution of your life. But, imagine: one of your own beating fate, overpowering destiny and transcending life, even briefly. How beautiful would that be? 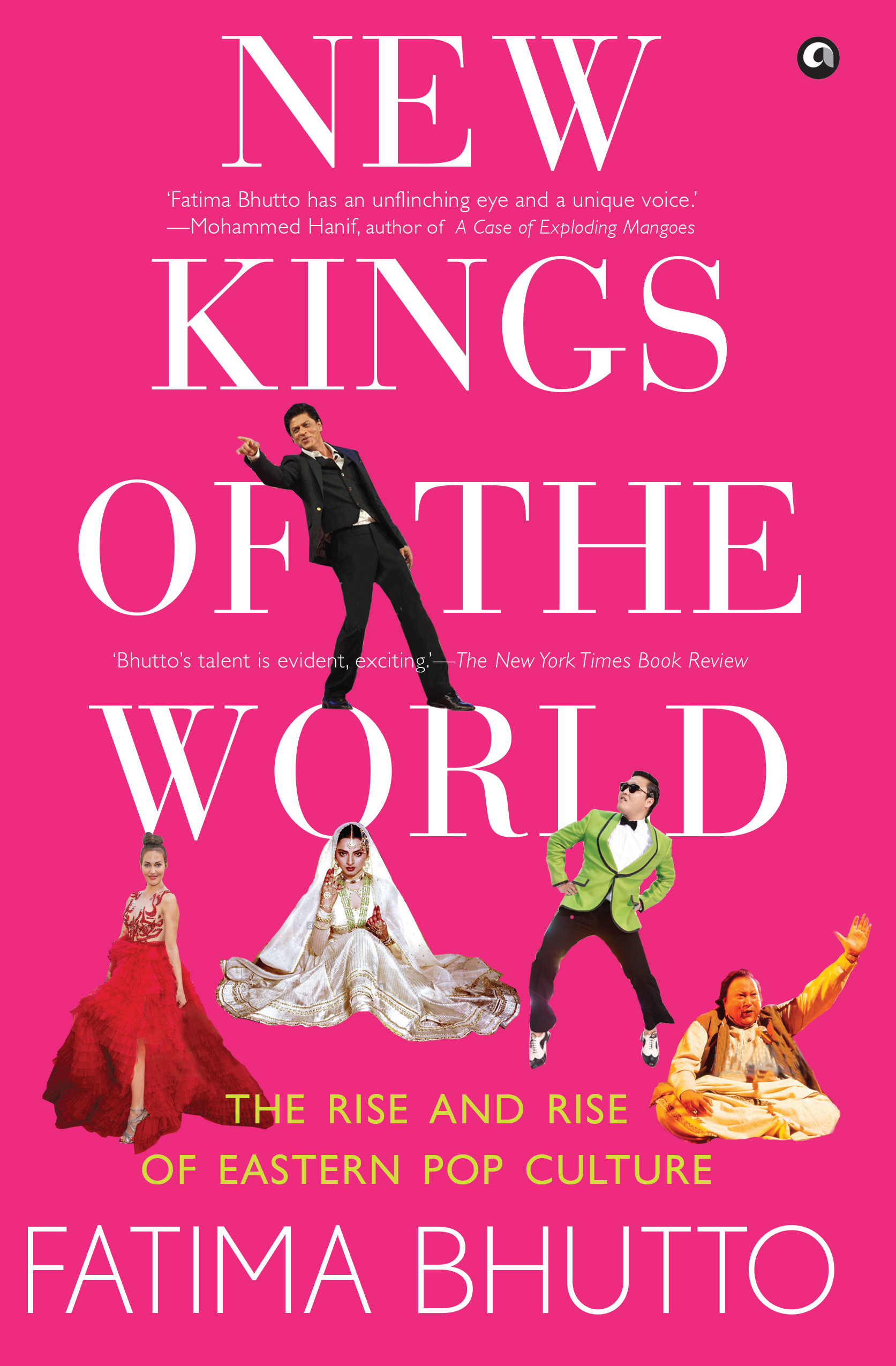 Excerpted with permission from New Kings Of The World: The Rise And Rise Of Eastern Pop Culture, Fatima Bhutto, Aleph Book Company. Read more about the book here and buy it here.

James Barr on "Lords Of The Desert": 'Archived files suggesting that the British spied on American politicians visiting Palestine in the late 1940s piqued my interest and inspired my latest book'
Bacteria-breeding Coconuts or Biological Coconut Bombs: How the humble Coconut has been used to help combat Malaria