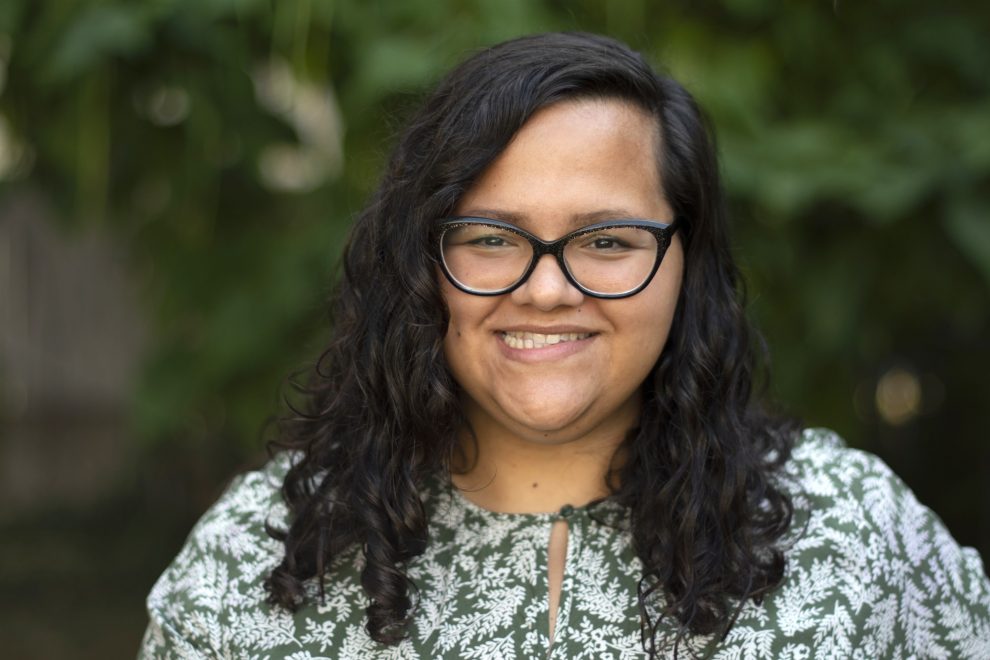 As we pull up to my house, a single-story white ranch with my dad’s beloved Puerto Rican flag dangling from the porch, I point to my mom’s Audi in the driveway. Then I sigh. “Puppy would have to live with her, too, though.”

I had been not-so-secretly hoping that my mom’s job as branch manager at the local credit union might keep her late so that she wouldn’t be home yet, but now that I work, too, that’s not always the case.

“We could go to my house instead, if you want.”

“We’re already here.” I pull the keys out of the ignition. “Plus, she’ll be pleased to see her favorite daughter.”

I mean Amelia and she knows it, so she gives me the finger.

We head inside. I’m immediately hit with the sweet scents of apple and cinnamon, and without stepping into the kitchen, I know a candle is burning on the windowsill. It’s Mom’s favorite to light because it “goes with the theme,” meaning the red accent wall and carefully placed apple knickknacks on most of the oak surfaces.

“Charlotte, I’m right here. There’s no need for yelling!” my mom calls from the other room. She’s yelling, too, though.

“Amelia is here,” I say, tossing my keys onto the side table next to the door.

The tone of Mom’s voice changes immediately. “Oh! Amelia!” she says, and she’s suddenly in the living room to greet us. Her hair is pulled back into a sleek ponytail, and she’s wearing yoga pants, a fitted athletic top, and sneakers, signaling she’s likely on the way to the gym. She kisses my cheek, then Amelia’s. To Amelia, she says, “So good to see you. Don’t you look beautiful! Special day at school?”

I glance at Amelia, but I don’t really need to to know that yes, she does. She always looks beautiful. She has flawless dark skin that never blemishes and curly black hair that never seems out of place. She’s tall and thin and everything looks good on her and it’s completely unfair but also, like, if anyone deserves to be that flawless, it’s Amelia.

“No, nothing special today,” Amelia says, glancing down at her retro- chic outfit—a fitted black turtleneck and tights under a curve- hugging spaghetti- strap dress—with a shrug.

“See, Charlie. You always say people don’t dress up for school, but they do! Look how put together Amelia looks.” My mom’s eyes flit over my outfit—jeans, ballet flats, and what I thought was a pretty cute sweater—as if to say compared to this.

Mom waves her hand at me. “You know what I mean. Anyway, Amelia, you look great.”

“You know you can call me Mom!”

She’s offered this to Amelia about a hundred times now. I suppress an eye roll. “Mom, I think we’re going to go hang out in my room and do some homework. Okay?”

“Okay. Let me know if you need anything.”

“We will,” I call over my shoulder as we walk to my room. Behind us, I close and lock the door as Amelia starts giggling and flops on my bed, tossing her bag on the floor. I laugh a little, too.

“She really wants you to call her Mom,” I say.

“It just feels too weird to me! I’ve never called her Mom, not since we met in the second grade. Why does she keep saying that to me lately?”

“She just really likes you.” I shrug, trying to keep my voice cool. “And you know how she is. Once she’s made up her mind about something she wants, that’s it. So if she hasn’t stopped offering that to you yet, she never will.”

That said, it’s true Amelia embodies a lot of the characteristics my mom wishes I possessed. I sometimes can’t blame her. I wish I could be more like Amelia, too.

As far as best friends go, Amelia and I probably don’t make much sense on paper. It feels like she’s pretty close to perfect, and I’m more of the surviving- not- thriving type—the sidekick, the brown bestie. Aside from being beautiful, Amelia is the walking embodiment of Black excellence—her grace and warmth and wit are on another level, one which I aspire to someday come near. (But I know that’s a long shot, so I find myself being fine just circling in her orbit.)

An athlete who does track and volleyball, Amelia’s got a lot of friends. She’s an infectious laugher, charismatic, and toes that line between tough and kind. She tells it like it is, but in such a genuine way that no one minds. And her love life is something I’ve envied for years. She’s dated people of all genders—Amelia identifies as pan, and has since at least sixth grade—and I’ve always admired her unwavering confidence, which I think draws people to her.

I am not sure any of the adjectives I use to describe Amelia can also be used to describe me. I’m anxious and insecure, full of self- doubt, and probably annoying. There are good things about me, sure, but I’m mostly friendless (unless internet friends count?) and I’m certainly not athletic or popular. (I do have great hair, though.)

I’ve also never dated anyone. And I’m fat. Those things don’t necessarily go hand in hand, but for me, I think they do.

I’ve always been fat, but I didn’t know I was fat- with-a-capital-F until I was in fourth grade, having a great time on a field trip, and one of my classmates told me so. There I was, sitting with Amelia on a bench at the local science museum, when Mason Beckett suddenly needed to sit next to his BFF, Elijah McGrady, and he tried to squeeze in between me and him. When Mason struggled to fit—he had a chunky body, too—he turned and looked me square in the face and said, “Jeez, Charlie, why do you have to be so fat?”

That seemingly small moment made me acutely aware of my body and its bigness, and it was then that I realized that being fat is a thing: A Very Bad Thing, according to most.

The world around me has reiterated that fact over and over in hundreds of ways since: the way people eye my body and shift uncomfortably away when I’m getting on the bus; the way the gym teacher loudly tsks me—and only me—every time I have to get weighed at school as part of the “physical fitness test”; the way my doctor doesn’t even hear me when I’m complaining about sinus pain, and instead assures me that if I “try and lose weight” that’ll fix my problems; the way most stores refuse to make clothes that even fit me and then if they do, they’re much more expensive, as if my fat body comes with a fat wallet, too. So you can see why I envy Amelia so much.

Currently, Amelia is texting—probably with Sid—so I pull out my ancient math book and binder and settle in at my desk.

“I saw you talking to Benny outside of study hall today.” Amelia is focused on her phone, but she doesn’t hide the coy smile as she speaks. “What was that about?”

I roll my eyes. Benjamin (not Benny) is this boy that Amelia thinks is obsessed with me, but really we’re just classmates. I’m nice to him because he’s a generally nice guy and we’re in the same biology class. “It was about him needing clarification on the homework.”

“I think it was about him liiiking you,” she says, looking up at me. I roll my eyes again. When Amelia is talking to me about boys, I’m usually rolling my eyes. “Think about it. Benjamin is basically a science genius. Did he really need homework clarification? Or was he just looking for an excuse to talk to you?”

“He really just needed homework clarification,” I say. “You know he can’t always see the board. He has really bad vision.” I instinctively push my own glasses higher up on my face.

“He could check online, though,” Amelia presses.

“It was easier for him to ask me.”

Amelia makes a face like she’s not convinced. “I’m just saying. You two are awfully cozy.”

“I appreciate you being the biggest cheerleader for my love life, but Benjamin and I are just friends. And hardly that. He’s really sweet, but a little weird. You know that,” I say. “Besides, I like someone else. You know that, too.”

Cal Carter. What is about people with alliterative names that makes them so much better? I don’t know. But he’s amazing.

Tall. Muscular. Piercing green eyes. Sandy blond hair that falls just so. A smile that’s often a smirk, like he’s in on some devilish secret.

But she’s right that I shouldn’t be into Cal—mostly because he’s actually into Amelia.

I know, I know. She’s told Cal a million times it’s not going to happen, but he still hangs around. I should have better sense than to like someone who persists even after they’ve been turned down, yet here I am. Fawning over him.

Because he’s nice to me. Really, really nice to me. He tells me jokes. He makes me laugh. He has conversations with me. He even says hi to me when he’s around his football friends, which is huge. Basically, he’s one of the few guys who will give me the time of day. And have I mentioned he’s the knees- weak, butterflies-in-our- stomach, stay-up-late- dreaming- about type of hot? His real smile—not the smirk, though that’s great, too—could probably inspire world peace.

And I’d never tell Amelia this, but here’s my secret and way- too- embarrassing-to-share hope: one day, he’ll realize it was me all along.

Join The Dispatch Whatsapp Group to stay updated
The Dispatch is present across a number of social media platforms. Subscribe to our YouTube channel for exciting videos; join us on Facebook, Intagram and Twitter for quick updates and discussions. We are also available on the Telegram. Follow us on Pinterest for thousands of pictures and graphics. We care to respond to text messages on WhatsApp at 8082480136 [No calls accepted]. To contribute an article or pitch a story idea, write to us at [email protected] |Click to know more about The Dispatch, our standards and policies
TagsCrystal Maldonado Fat Chance Charlie Vega Holiday House Publishing YA Novel