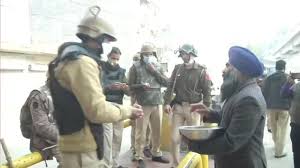 The farmers protesting against the newly enacted farm laws at Delhi-Haryana border on Monday offered prayers on the occasion of Guru Nanak Jayanti and distributed ‘prasad’ among each other and security personnel.
To mark the birth anniversary of the founder of Sikhism and one of the most celebrated Sikh gurus, farmers protesting at the Tikri border and Singhu border were seen offering prayer here.

Speaking to ANI, Bharatiya Kisan Union (Doaba) president Manjeet Singh said that even though farmers from Punjab have come to Delhi to protest against the farm laws, they are celebrating the occasion with great zeal.
“Today is a very auspicious day for us. We are fortunate that today is Guru Nanak Dev ji’s birthday. This our ‘sanskars’ in Punjab that we celebrate Guruparva with great zeal. We will do the same tonight as well,” Singh said.
He said that the ‘jatbandi’ will do ‘kirtan’ and then there will be ‘Ardas’ on stage and ‘Deepmala’ will also be done in the evening in which farmers will light lamps and candles on the tractor and trolleys in all places.

“We have definitely come here from Punjab but we will celebrate Guruparva the same way we do every year. In Ardas, we pray that our Guru Nanak ji gives good sense to the government so that the “black laws” being imposed on us are scrapped,” Singh said.
Guru Nanak Jayanti, also known as Guru Nanak Gurpurab, is celebrated to mark the birth of the first Sikh Guru and is considered one of the most sacred festivals among Sikhs. The day is celebrated on the full moon day of the Kartik month as per the Hindu calendar. It is also marked as Kartik Poornima.

Farmers have been protesting at various places in Delhi and Haryana and have rejected the Central government’s offer to hold talks on December 3 saying that imposing conditions for starting a dialogue is an insult to them.

Around 32 farmer organisations, mostly from Punjab, and a few farmers from Gujarat and Maharashtra as well managed to reach Delhi on Friday and assembled at the border areas to continue their protest.

The farmers are protesting against The Farmers’ Produce Trade and Commerce (Promotion and Facilitation) Act, 2020, The Farmers (Empowerment and Protection) Agreement on Price Assurance and Farm Services Act, 2020, and The Essential Commodities (Amendment) Act, 2020.

Union Agriculture Minister Narendra Singh Tomar has said that the Central government is ready for talks with the farmers’ unions on December 3.