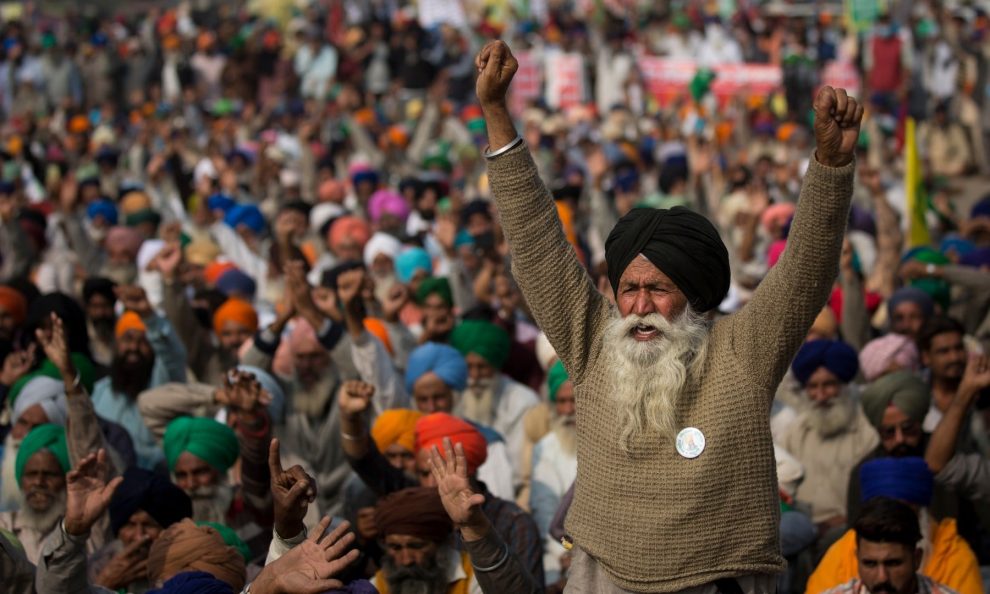 Golgappas, chat, sarsoan saag, jalebis, besan barfi, badam, kaju and fruits topped by foot massages. A wedding celebration? No this is a caravan of thousands of tractors, trucks and trolleys converted into spacious rooms with warm beddings, everyone ready to survive the chill of winter out in the open which have encircled the Union Capital at the Singhu, Tikri, Chilla etc  borders armed with slogans and obdurate intent for over two weeks.

Under normal circumstances, it would be just another segment of protest — no shortage in the country as no day passes without a strike somewhere. Be it a mohalla, district or State. But this windstorm of farmers from Punjab, Haryana and UP are dissenting against the three farm laws passed by the Government in September thereby taking the Government head-on

The script is stuck between the Sarkar’s offer and the farmers demand for repeal of the contentious laws. Both operating across a wide chasm of belief and trust. The protesting farmers are apprehensive that they will no longer get paid the Minimum Support Price, Government will scrap mandis, commission agents will not get their commission thereby leaving them at the mercy of big corporates and States tax.

Pertinently, many farmers see the MSP as a vital safety net and fear they will be unable to compete with large farms and would be paid low prices by big corporations. Asserted a kisan, “The laws will harm us and in turn destroy our livelihood. Our land, cattle and we will be enslaved by rich people. This Government wants to finish us.”

Some agriculture experts say the three laws violate the federal character of the Constitution as agriculture is under the purview of the State List and the Centre has no jurisdiction to rule over agriculture even under the Concurrent List.

However, the Government has repeatedly assured them that MSP will not be scrapped but with  no legal guarantee for all produce, will implement amendments, but not repeal farm laws and is prepared to hold further negotiations to resolve impasse. Government sources aver these reforms would  double farmers incomes by 2022.

Yet, even as many kisan feel there are many things which are outdated in the agriculture sector, but reforms should not be pushed like this. Said a kisan leader, “Our public stand is a full repeal, but we can negotiate provided the Government is ready to provide remunerative MSP as a legal entitlement to all farmers for all produce.”

Think. For the past few decades, farm incomes have remained largely stagnant and the sector is in sore need of investment and modernization as it provides a livelihood to nearly 70% of the country’s 1.3 billion people and accounts for around 15% of the $2.7-trillion economy. Despite a steady attrition in the numbers engaged in agriculture over the years, it remains a formidable employer, accounting for nearly 42% of the total workforce and contributing to 15.96% of the GDP (2019).

Interestingly, not many are aware that most of the agitating farmers are from Punjab and Haryana as they are the biggest beneficiaries of the MSP.  In Punjab the gross irrigated area is 7.442 million hectare and the percentage of net irrigated sown area is 96.17%. The total number of land holdings are 10.93 lakh out of which 2.04 lakh (18.7%) are marginal farmers, 1.83 lakh (16.7%) small farmers and 7.06 lakh (64.6%) farmers hold land above 2 hectare . Leading to public investment in kheti-baari steadily falling.

At one level the farmers’ protest looks less political and more about subsistence given the sustained agrarian crisis. It emerges from the basic need for food that concerns all.  Over 65% of the population lives and works in agriculture, or activities thereof. But, over the last 25 years the share of farming in the economy has shrunk from over 33% to 15%. Leading to public investment in kheti-baari steadily falling.

Appallingly in the last twenty years alone over 346,538 farmers committed suicide, an average of 16,500 casualties annually or 45 deaths every day according to the National Crime Records Bureau. However, agricultural experts aver the actual number of suicides is treble of this. In Punjab, the country’s food bowl in 11 districts till three years ago almost 6,926 farmers and farm labourers committed suicide.

Further, the farm sector is crippled by high indebtedness.  While the all-India aggregate rests at 51.9%, Andhra Pradesh has the highest share of indebted agricultural households 92.9% followed by Southern brethrens Telengana 89.1, Tamil Nadu 82.5, Kerala and Karnataka at 77.7% and 77.3%. Shockingly, Rajasthan is next with 61.8% and Punjab at 53.2%.

This is not all. Since about 6% of the population is still dependent on rain, groundwater continues to be lifted indiscriminately. Resulting in a sharp drop of 3 to 5 % every year in the water tables (from 20-30 ft to 300-400 ft). In some areas all the three levels of soil stand exhausted. Add to this, no plans are in the pipeline to decongest highly populated areas, which result in too many tubewells and a lowering of the groundwater table.

The harsh reality is that acute water shortage and unseasonal rains destroy crops in over 93.81 lakh hectares in northern India alone every year. In some regions drought-like situations prevail with too little rain resulting in over 40% crop failures due to lack of irrigation, while floods in others have lead to destruction of harvest.

What next? Certainly, the farmers may have genuine grouses. But this is not the way to go about getting the Government to see reason. Till date the Government has shown good faith by holding six rounds of talks with 40 farmer union leaders totaling 20 hours of negotiations offering them a wide range of amendments in the laws, which address most of their concerns.

Yet kisans, it seems prefer stubborn inflexibility taking the maximalist position of repeal of the three laws vowing to not only continue protest but also go on hunger strike.  Thereby creating a perception that they are more interested in grandstanding wanting to humble the Government than seeking an equitable solution to their woes.

Clearly, this maximalist position of repeal of the three laws by the farmers tantamount to blackmail. Obviously no Government will tolerate blackmail and ‘it’s my way or the highway’ muscle flexing as it would open the flood gates for more bodies and lobbies holding the Administration to ransom, challenging its authority. True, the farm laws might not be perfect or 100% fool-proof, but perhaps with more amendments, they could have the potential to provide a much-needed framework of change for the agricultural sector while simultaneously protecting the farmers’ interests. Clearly, the time has come for kisans to climb down from their stubborn intransigence and restart negotiations with the Government in the larger interest of farmers and the country. Sagacity must prevail.