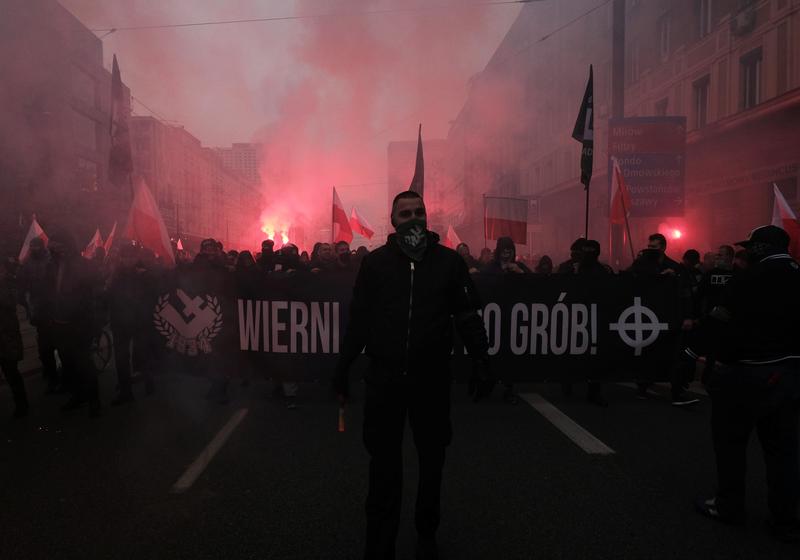 WARSAW: Far-right sympathisers clashed with police on Wednesday near Poland’s National Stadium, recently converted into a COVID-19 field hospital, at the end of an Independence Day march that took place in defiance of pandemic restrictions.

Planned as a drive through the capital’s main roads to circumvent a ban from city hall, the annual event took a different form as thousands of people marched on foot through central Warsaw in addition to those driving.

Police in riot gear used pepper spray to break up sporadic scuffles along the route.

“Where there is brutal action on the part of people, where there is damage to property … when policemen are hospitalised, they need medical assistance, no there is nothing called a peaceful gathering,” said Warsaw police spokesman Sylwester Marczak.

Marczak said police had been attacked with rocks and flares, resulting in several injuries to officers.

The annual event has become a point of friction between far-right groups and supporters of the nationalist government of Prime Minister Mateusz Morawiecki on one side, and their liberal opponents on the other.

Robert Bakiewicz, the head of the association that organises the march, blamed the violence on the police, saying they had provoked marchers near the National Stadium.

Marczak said police had blocked the protesters in the vicinity to protect a route used to transport ventilators for the handful of COVID-19 patients being treated there.

The country has seen soaring numbers of coronavirus infections, with the total number of cases more than quadrupling in a month.

In recent weeks Poland has seen mass street protests sparked by a ruling by the Constitutional Court that introduced a near-total ban on abortion in the predominantly Catholic nation.

The Independence Day march organisers sought to paint the decision as part of a fight against attempts to challenge traditional values.

“What will remain of today’s independence march … is a desire to show that we are a state or a society … which relates to these traditional, conservative, Christian, Catholic values,” Bakiewicz told state-run broadcaster TVP Info.

“We do not want this neo-Bolshevik revolution on our streets.”

Marchers carried red-and-white Polish flags amidst clouds of smoke from red flares and held up banners that read “Our civilisation, our rules”.

Others carried religious symbols or banners showing the Communist hammer and sickle emblem crossed out.

A truck with a banner “No to Jewish demands” also appeared, in an apparent reference to far-right groups’ opposition to any return of property taken from Jews during the Holocaust.

Another truck bore the slogan “Normal family – strong Poland”, a phrase used by right-wing parties in Poland to express their resistance to LGBT rights.

Footage posted on social media showed flames coming from the window of a flat near the demonstrations. A Warsaw fire brigade spokesman said the blaze was probably caused by a flare or firecracker, and that nobody had been hurt in the incident.

Authorities in Warsaw, which is governed by a centrist mayor, accused the state-run police force of facilitating the march.

“The law is being broken here,” said Karolina Galecka, a city hall spokeswoman. “Police have spent 12 hours preparing to secure the march, we were not informed about this … and at this point you could say the police are co-organising it.”

Marczak said the police were simply preparing for all eventualities.

“The Polish police are professional and responsible, so we are not preparing for one variant of an event.”

Teen pregnancy costs Latin America billions of dollars a year – U.N.
‘As a gig worker, here’s what I expect from the next U.S. president’
Comment