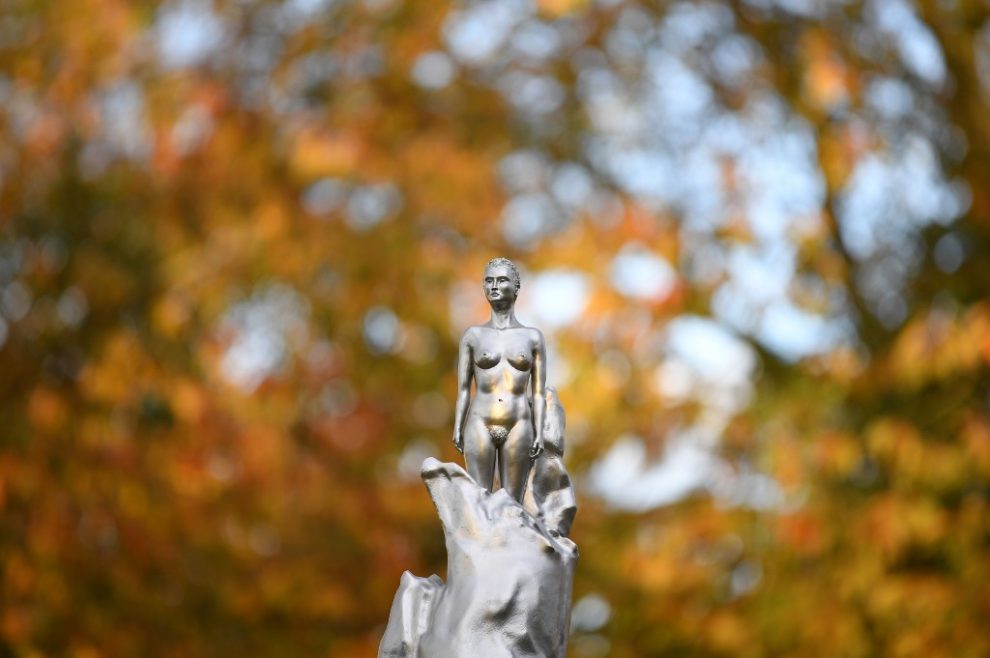 LONDON: A storm of protest over a nude monument to British women’s rights pioneer Mary Wollstonecraft – described as a melted World Cup topped by a silver Barbie doll – has sparked a crowdfunding campaign for a more “dignified” tribute.

Critics of the sculpture by renowned artist Maggi Hambling have repeatedly covered it in clothes since its unveiling in London last week, calling it an insult to the memory of the “mother of feminism”.

Hambling said her sculpture of a naked “Everywoman” emerging from an abstract form of intermingled female figures was meant to reflect Wollstonecraft’s spirit rather than depict her likeness.

But angered Wollstonecraft fans have launched a campaign to fund a more traditional proposal by sculptor Martin Jennings, which was runner-up to Hambling’s design during the commissioning process.

Jennings, whose sculpture shows Wollstonecraft holding a quill while resting her other hand on a pile of books, said he was thrilled by the public enthusiasm for his version.

As a “hugely significant” figure in the history of women’s rights, Wollstonecraft deserved a monument that was of her, rather than of an idea, Jennings said.

“Women have been represented as ideas in public sculpture for generations and I think people are fed up with that,” he told the Thomson Reuters Foundation.

“The new sculpture doesn’t seem to be about Mary Wollstonecraft.”

The uproar, which has made headlines around the world, comes amid a debate in Britain over who should be commemorated in public. Only about a sixth of statues represent women, according to The National Trust charity.

Jennings, whose design includes a stone bench to encourage passers-by to sit with Wollstonecraft, said people were too keen to commission attention-grabbing “statement pieces” when something simpler was needed.

His other statues include poet John Betjeman, writer Philip Larkin and Mary Seacole, a British-Jamaican nurse who treated injured soldiers in the Crimean War.

Wollstonecraft called for gender equality a century before the campaign for women’s voting rights and is best known for her 1792 work “A Vindication of the Rights of Woman”.

But she was written out of history because of attitudes towards her unconventional personal life.

Contributors described Hambling’s monument as “an embarrassment and a disgrace” and praised the dignity of Jennings’ design.

“So much more respectful than Hambling’s ‘naked silver Barbie doll’ effort,” wrote one on the campaign’s fundraising page.

But some commentators on social media have pointed out that the controversy around Hambling’s artwork has generated huge interest in Wollstonecraft, introducing the thinker to many people who had never heard of her.

The debacle has also boosted donations for campaigns for statues to writer Virginia Woolf and suffragette Sylvia Pankhurst.