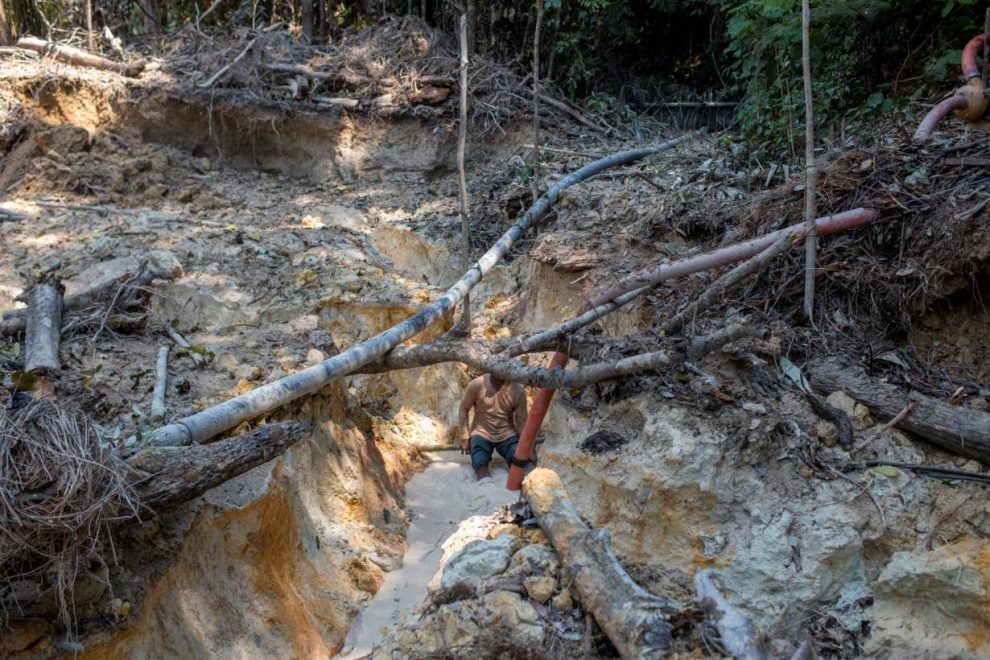 ITAITUBA, Brazil: One man working deep in Brazil’s Amazon said he knows how to stop the illegal logging, gold mining, deforestation and fires plaguing the region: let President Jair Bolsonaro carry out his plans to develop the rainforest.

“If people listen to him and believe in his ideas … many of the environmental issues would improve here in the Amazon,” said the 53-year-old wildcat miner, who asked to be identified only by his nickname, Grande.

Grande’s views are in direct opposition to those of leaders and environmentalists all over the world, who point to Bolsonaro’s call to open up the Amazon to mining and agriculture as a driving force behind the rainforest’s rampant destruction.

For four days, the Thomson Reuters Foundation accompanied Grande during an illegal mining operation in the northern state of Para, near the city of Itaituba.

During that time, the mining boss and his workers spoke of how they felt persecuted by the Brazilian environmental agents and how they are in a constant struggle for economic survival, with Bolsonaro as one of their few allies.

The Amazon has more than 4,470 illegal mining sites, more than half of them in Brazil, according to a report published last year by the Amazon Geo-Referenced Socio-Environmental Information Network, a nonprofit.

Much of that activity is due to the rise in the price of gold, said Grande, who has been an illegal wildcat miner for two decades.

The gold reserves outside of the Amazon’s protected areas are running out, he explained, leading miners to push deeper into the rainforest, onto preserved land, in search of the precious metal.

Grande said if he and his fellow miners could work legally in protected areas, they would stay within designated boundaries and the rest of the Amazon would be preserved.

“We want this solved once and for all: ‘From here to there you can’t (mine gold), but here you can.’ Because the problem is someone coming here and saying that we can’t do it, without presenting any kind of solution. We’re adrift,” he said.

Illegal miners are pinning their hopes on a bill Bolsonaro sent to Brazil’s Congress last February that would open up indigenous reservations to commercial mining.

But even as they wait to see what comes of the bill, Grande said they are benefiting from the president’s weakening of the country’s main environmental agency, Ibama.

Since Bolsonaro took office in January 2019, Ibama’s budget has been cut by a quarter, including a 23% reduction in funding for prevention and control of forest fires.

Miners dread the agency because its agents are known to burn mining equipment whenever they find an illegal site, a strategy that Bolsonaro and his Environment Minister Ricardo Salles have publicly spoken out against.

Last April, Salles fired the country’s top environmental enforcement officer after a TV news program aired a dramatic raid on illegal mining in the Amazon rainforest – a broadcast that was seen as critical of the government.

Repeated requests for comment from Salles, Bolsonaro and Ibama were not answered.

Grande runs his illegal mining operation – or garimpo – in partnership with a man known as Frances.

Each man employs three workers, and they spend months at a time in the jungle, living in open sheds and sleeping in hammocks.

A woman hired to cook for the crew is the only person to received a fixed salary, Grande said, with the others earning 10% of the gold they find.

Each of Grande’s three workers takes home about 20 grams of gold a month, which today would net them about 6,000 reais ($1,130), nearly six times Brazil’s minimum monthly wage.

The land at the site near Itaituba had been cleared of trees and the earth excavated, but Grande insisted their work does little harm to the rainforest.

He noted that his is a small operation, without large machinery to clear land. His crew works by hand, which does less damage to the soil, he said.

“The earth never stops being fertile,” Grande said. “There are areas I worked last year that have fully recovered already.”

But even small garimpos are damaging to the environment, said Juliana Siqueira-Gay, a researcher from the University of Sao Paulo who studies the impact of illegal mining on forests.

“His garimpo obviously has less impact than one powered by huge machines,” she said. “But garimpos tend to be near each other, and the impact they have is cumulative.”

In Brazil’s Amazon, deforestation – an important contributor to climate change – hit an 11-year high in 2019 and soared a further 25% in the first half of 2020, according to the National Institute for Space Research.

Grande’s wife, who asked not to be identified, takes pride in her husband’s work.

“This house, this family, all of this, is supported by mining,” she said.

She noted that the money he makes covers the college fees for their daughter, who is studying to become an environmental engineer.

Wildcat miners have become more organized and are increasingly presenting themselves as family men going up against oppressive environmental agencies and nonprofits, said Luisa Molina, an anthropologist at the University of Brasilia.

“This kind of narrative has a lot of appeal. It romanticizes the work they do,” said Molina, who studies indigenous people affected by illegal gold mining in Para state.

But behind the carefully cultivated public image, “garimpos are synonymous with prostitution, drugs, booze and guns,” she said.

One of the men working for Frances, nicknamed Seu Ze, told the Thomson Reuters Foundation that he had worked in garimpos since the early 1980s and spends most of his money on alcohol and women.

“The garimpo gives me a lot (of money), but I am unable to save it,” noted the 65-year-old miner.

He said critics of illegal mining forget that ending the illicit industry would lead to thousands of people losing their livelihoods.

“There are many who survive solely from the garimpo. And what are these people going to do? The government is in no condition to provide food for this many people,” he noted.

One morning, the group received a radio message from one of the lookouts posted along nearby access roads, warning that officials from Ibama were in the region.

The crew became tense and the work stopped, only to resume after confirmation that the officials had left the area.

Grande said the miners are frustrated that the bill the president sent to Congress to allow commercial mining on indigenous land has made little progress.

Until their activities are legalized, the cat and mouse game between the miners and the authorities will continue, he said.

“I cannot cower and leave my family in need, so I will fight to the last minute,” he said.