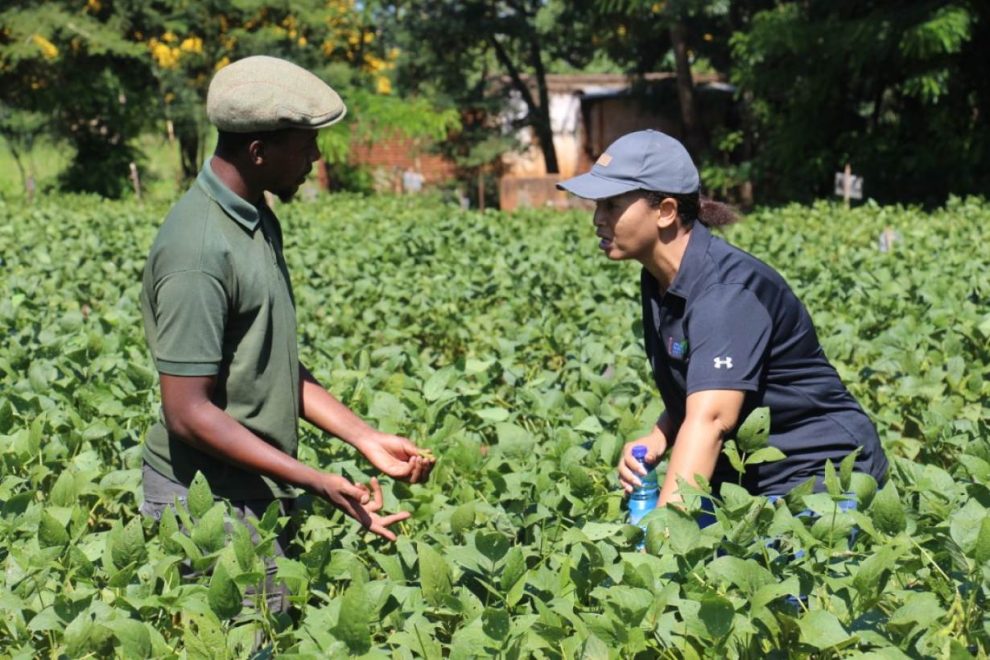 ROME: Young African farmers Mavis Gofa and Andrew Goodman had a vastly different upbringing – Gofa grew up on a one-hectare (2.5-acre) farm and could not afford to finish high school, while Goodman’s family cultivated 275 hectares and educated him in Britain.

Both want a better life for the families who run the world’s half a billion small farms, many of whom remain steeped in poverty despite producing about 80% of food consumed in Asia and sub-Saharan Africa, according to the United Nations.

It is a tough ask as climate change makes life even harder for millions of small-scale farmers – with scientists predicting more frequent and intense floods, droughts and storms.

In Mutoko in northeastern Zimbabwe, Gofa, 25, is seeing yields from her rain-fed maize dwindle, as the start of the planting season is delayed from mid-October to late December.

Goodman, 24, is also struggling at his family farm outside Malawi’s capital Lilongwe, which grows seeds for crops such as maize, soy bean and groundnut, and works closely with about 5,000 small farmers every season.

The beginning of the rainy season has shifted from October to mid-November, older farmers told Goodman.

When showers do come, they often turn heavy, destroying crops and eroding the soil’s fertile layer. This forces farmers to buy more inputs such as fertilisers to keep yields up but the higher costs then push them back into poverty, he added.

A recent study led by University College London (UCL) showed such experiences could become widespread as the planet warms, with significant implications for hunger and inequality.

It looked at 18 crops – including those grown mainly in developing nations such as cassava, groundnut and rapeseed – representing 70% of the world’s crop area and about 65% of its calorific intake.

The study found that harvests of key crops – such as pulses in West Africa, rice in India and Pakistan, and wheat in Sudan – would fall if temperatures rose 1 degree Celsius above today’s levels, even without other impacts such as floods.

Globally, the average temperature has so far risen a little more than 1C since pre-industrial times, although the change varies in different parts of the world – and projections are for warming to increase further to 3C or more this century.

The study also said countries where increasing temperatures cause the most negative impacts already have lower-than-average yields and are struggling to feed their citizens, denting their resilience and ability to adapt to additional heating.

The social implications of even 1C of additional warming could be “massive”, added Agnolucci, associate professor at UCL.

Some developed countries that enjoy high yields of crops like potatoes, soy and maize – for example, in northern Europe – are likely to benefit if the climate heats up by another 1C, the study said.

But climate impacts are getting harder to ignore even here, other scientists noted.

Ariel Ortiz-Bobea, an associate professor at Cornell University researching the historical impacts of climate change on agriculture, pointed to the unusual and brutal 2019 spring floods in the U.S. Midwest that inundated huge swathes of farmland.

In Italy, meanwhile, where olive oil is part of the country’s cultural heritage, olive farmers like Gianni Proietti say they have been battered by climate disasters.

Proietti’s 50-hectare farm in the picturesque Umbrian hills in central Italy has in recent years suffered more frequent and severe plant diseases and extreme weather such as spring frosts and hailstorms.

Increases in average seasonal temperatures and humidity are to blame, said the 62-year-old, who now grows cereals, legumes and grapes as well as olive trees.

Insuring his crops against weather damage helps him cope with the losses but the most effective support would be measures to halt and reverse climate change, he added.

With global climate action moving at a slow pace, many small farmers in Africa are diversifying crops, to adapt to worsening weather extremes and shifting climate patterns.

Gofa in Zimbabwe now concentrates on sorghum and millet, which are more drought-resistant than maize, and is receiving training from international charity ActionAid on eco-friendly farming techniques.

Still, she faces many difficulties. For example, digging ridges in the soil so it holds more water is labour-intensive because she lacks equipment, she said.

For Goodman, obstacles in Malawi include getting hold of affordable, quality seeds for soil-friendly crops like legumes, and reliable information on weather, greener farming practices, crop performance and market prices.

He is working with aid organisations to address these issues, but said the situation was “unfair” to poor farmers.

Millions of small farmers have “woefully low access” to mobile networks and the Internet, putting digital technologies that could help them out of reach, said a study this month.

Less than 40% of farms smaller than a hectare have 3G or 4G cellular services and the cost of data remains prohibitive in many parts of Africa, said the International Center for Tropical Agriculture.

The UCL-led study said expansion of irrigation and increased use of fertilisers and pesticides could protect yields, but would come with environmental costs, from growing water scarcity to nitrous oxide emissions from fertilisers.

The only long-lasting solution is cooperation to help transfer technology from rich to poor countries, said UCL’s Agnolucci. Without this, the number of farmers quitting their land and migrating north could grow, he warned.

But Cornell’s Ortiz-Bobea said migration should be part of adaptation strategies. At some point, it will likely become impossible to improve productivity on land where soils are poor and water is scarce, even with the latest technology, he noted.

More radical ideas may be needed, he added.

“Maybe the best way to ensure food security is not necessarily for small-scale farmers to grow their own food, but being able to get an education and work in a sector where they can buy that food,” he said.