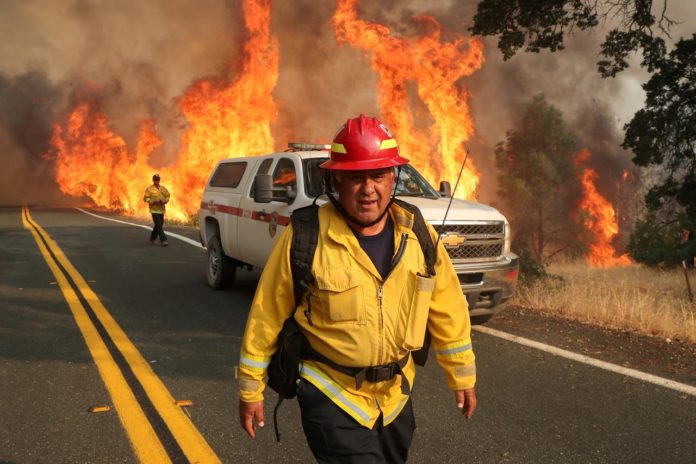 The worst of the wildfires, including the second and third largest in California history, burned in the San Francisco Bay Area with roughly 240,000 people under evacuation orders or warnings across the state.

Much of North California, including the Sierra Nevada Mountains and coast, was under a “red flag” alert for dry lightning and high winds, but the Bay Area got a reprieve as storms skipped the area, the National Weather Service reported.

The wildfires, ignited by over 13,000 lightning strikes from dry thunderstorms across Northern and Central California since Aug. 15, have killed at least seven people and destroyed over 1,200 homes and other structures.

Evacuees returned to homes burned by the LNU Lightning Complex wildfire, the second largest in state history, raging in mountains around 45 miles west of Sacramento.

“Nothing’s left, but we’re safe,” said a man, who did not give his name in an online video showing everything but his patio furniture destroyed at his house near Vacaville.

Smoke from fires that have burned over 1.2 million acres (485,620 hectares), an area more than three times larger than Los Angeles, created unhealthy conditions for much of Northern California and drifted as far as Kansas.

Firefighters gained 22% containment of the LNU but to the south the SCU Lightning Complex fire was nearly as large at 347,000 acres and only 10% contained. Firefighters threw most at its west flank burning less than 10 miles from downtown San Jose, population 1 million.

“This fire is by far a long ways away from being done,” said Cal Fire incident commander Jeff Ike of the blaze straddling seven counties.

“With the increase in humidity, the fire has actually extinguished itself,” Cal Fire Operations Chief Mark Brunton told a press briefing.

Over 14,000 firefighters were on the wildfires, with 91 fire crews traveling from seven states and National Guard troops arriving from four states, Newsom said.