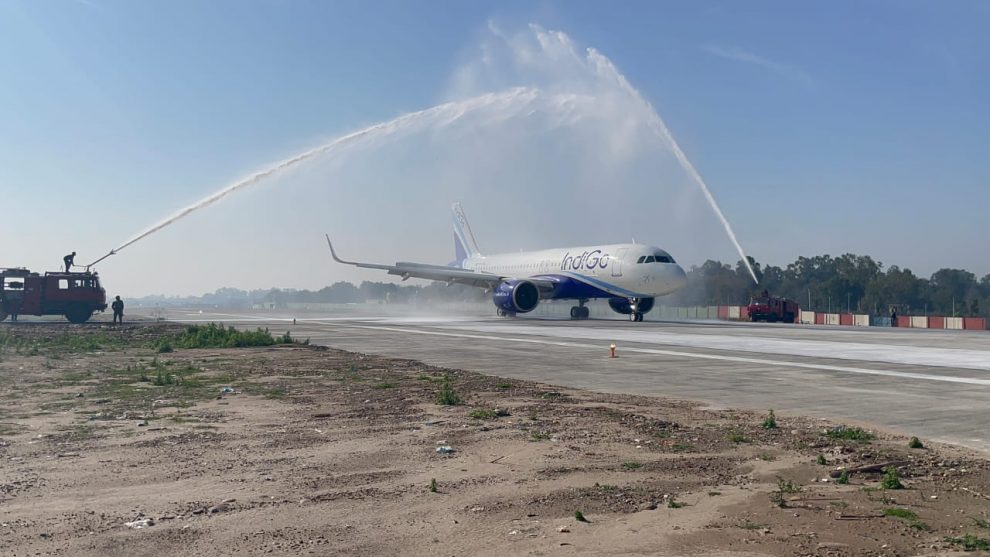 The Dispatch Staff
Add Comment
Official spokesman said that the existing runway, which is 6700 feet long has been extended and the revised stretch of runway is now of 8000 feet.

Jammu: The extended runway portion has been successfully operationalized on Friday at the Joint User Airfield of IAF and AAI at the Jammu Airport.

Official spokesman said that the existing runway, which is 6700 feet long has been extended and the revised stretch of runway is now of 8000 feet.

“The work was completed by Airports Authority of India in coordination with Indian Air Force and MES,” he said.

He said that Indigo Flight 6E-137 was the first flight that traversed through the newly constructed portion and water canon salute was given by Indian Air Force.

“In addition to the runway, 2800 metres of Boundary wall and rigid pavement Perimeter Road was also constructed and a Turn Pad designed for Airbus 321 was also constructed under this project,” he said.
AOC, IAF hailed the coordination of AAI, MES and IAF for the successful completion of this project.
Airport Director, AAI also thanked all the agencies involved in this project, especially the Engineering Team of AAI and said, “with the construction of the New Terminal Building of Jammu Airport at Belicharana will be instrumental in the development of Jammu and Kashmir, which will commence shortly.”