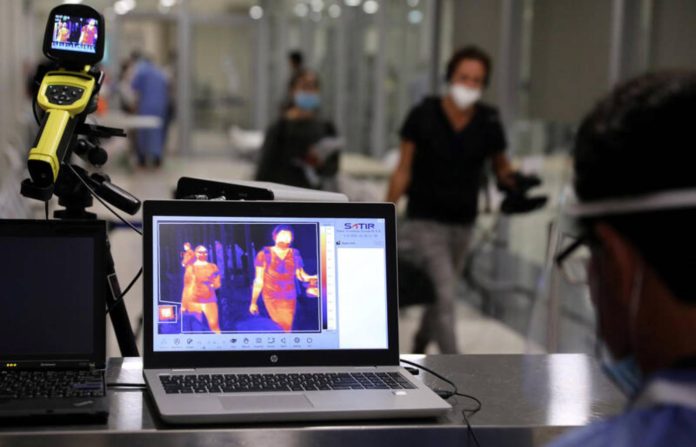 SANTA CRUZ: A range of technologies designed to combat the spread of COVID-19 is being deployed across Europe, from tracking apps to infrared cameras, posing a threat to individual digital rights and privacy, a report warned on Tuesday.

Using such tools, despite the urgency surrounding the pandemic, calls for proper oversight and should not be rushed, said the report by Germany’s AlgorithmWatch, a digital rights group, and Bertelsmann Foundation.

The research traced technology in use across 16 European countries, including telephone apps to track viral contacts, facial recognition systems that scan social distancing in crowds and infrared cameras that measure body temperature.

“Securing public health can and must be compatible with democratic checks and balances,” said Fabio Chiusi, project manager with AlgorithmWatch, in a statement.

“(COVID-19) may be used to justify the uncritical adoption of tools and policies that risk undermining human rights,” he said.

Many tools being touted as weapons in the battle against the virus have not been rigorously tested, especially for use in a pandemic, the report said.

Error rates in facial recognition systems spike by 50% when they involve people wearing facial masks, according to a recent study by the U.S. National Institute of Standards and Technology.

Thermal imaging technology designed to detect fevers also is prone to error, yet such scanners are rapidly being put to use in European supermarkets, stadiums and museums, said the report by AlgorithmWatch and Bertelsman.

In France, infrared cameras are being used in public schools and city halls to measure the temperatures of passersby, while the Italian city of Como has installed dozens of facial recognition cameras to monitor crowds for social distancing violations, it said.

And sports spectators in Spain are being scanned by a system that detects anyone with a body temperature above 37º C (98.6 F), it said.

Some European governments are not heeding recommendations by the World Health Organization that COVID-tracking technology be voluntary, it also said.

In Poland, for example, citizens are forced to download a government app that uses geolocation and facial recognition to enforce quarantine orders. The report also cautioned against proposed “immunity passport” systems, in which people would be able to obtain a certificate or demonstrate to an app that they are virus-free.

Such systems, being tested in Britain and in Estonia, could lead to discrimination and exclusion, especially if authorities or employers could have access to the content of the passports, it said.

“Technologies are no panacea in themselves,” said Sarah Fischer, project manager at Bertelsmann, in a statement.