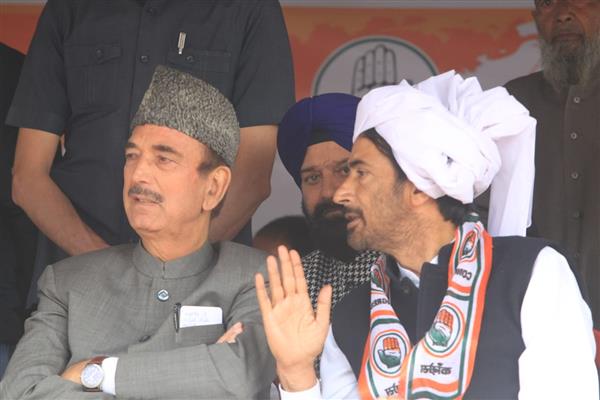 Jammu : Amid the talks over possible early assembly elections in the Union Territory, Congress seems to be going serious on ‘unification’ with party leadership initiating concerted efforts to keep its flock together in Jammu and Kashmir.

Sources within Congress told The Dispatch that the top leadership of the party has deputed Member of Parliament (MP) and AICC J&K Incharge Rajani Patil to hold separate meetings with two factions of the party in J&K.

Patil is reaching Jammu tomorrow for her three-day-long visit to Jammu and Kashmir. She will reach Srinagar on May 6 evening to hold interaction with party functionaries and senior leaders in Srinagar on May 7.

A senior Congress leader, who declined to be named, said, “She will be meeting two factions separately to ascertain what is required to unify the ranks ahead of assembly elections”.

“The party unit in J&K is split between former chief minister Ghulam Nabi Azad and PCC chief Ghulam Ahmed Mir. Keeping in view the possibility of early assembly elections in J&K, it is imperative that Congress should present a united face before the electorates because only a stronger Congress can deal with the present political challenges in Jammu and Kashmir,” the leader said.

Sources said that Patil’s visit comes in the backdrop of reported patch up between G26 and AICC leadership. “In its rapprochement bid, Congress president Sonia Gandhi had also met Ghulam Nabi Azad recently.

Besides, a joint meeting of Azad and Mir was also said to have taken place in New Delhi with the AICC chief. Patil will carry forward this agenda of bringing unity among Congress leaders by trying to bridge a gap between two factions,” sources said, adding “Azad loyalists are expected to get equally higher responsibilities in the party”.

Meanwhile, JKPCC, in a statement, stated J&K AICC Incharge would review the organizational affairs and activities in Jammu as well as in Kashmir, besides she would hold discussions on socio-political scenario obtaining in J&K, with the party functionaries.

“Subsequently, discussions over various issues of public importance would also come under discussion during Patil’s interaction with JKPCC leaders”, it added.