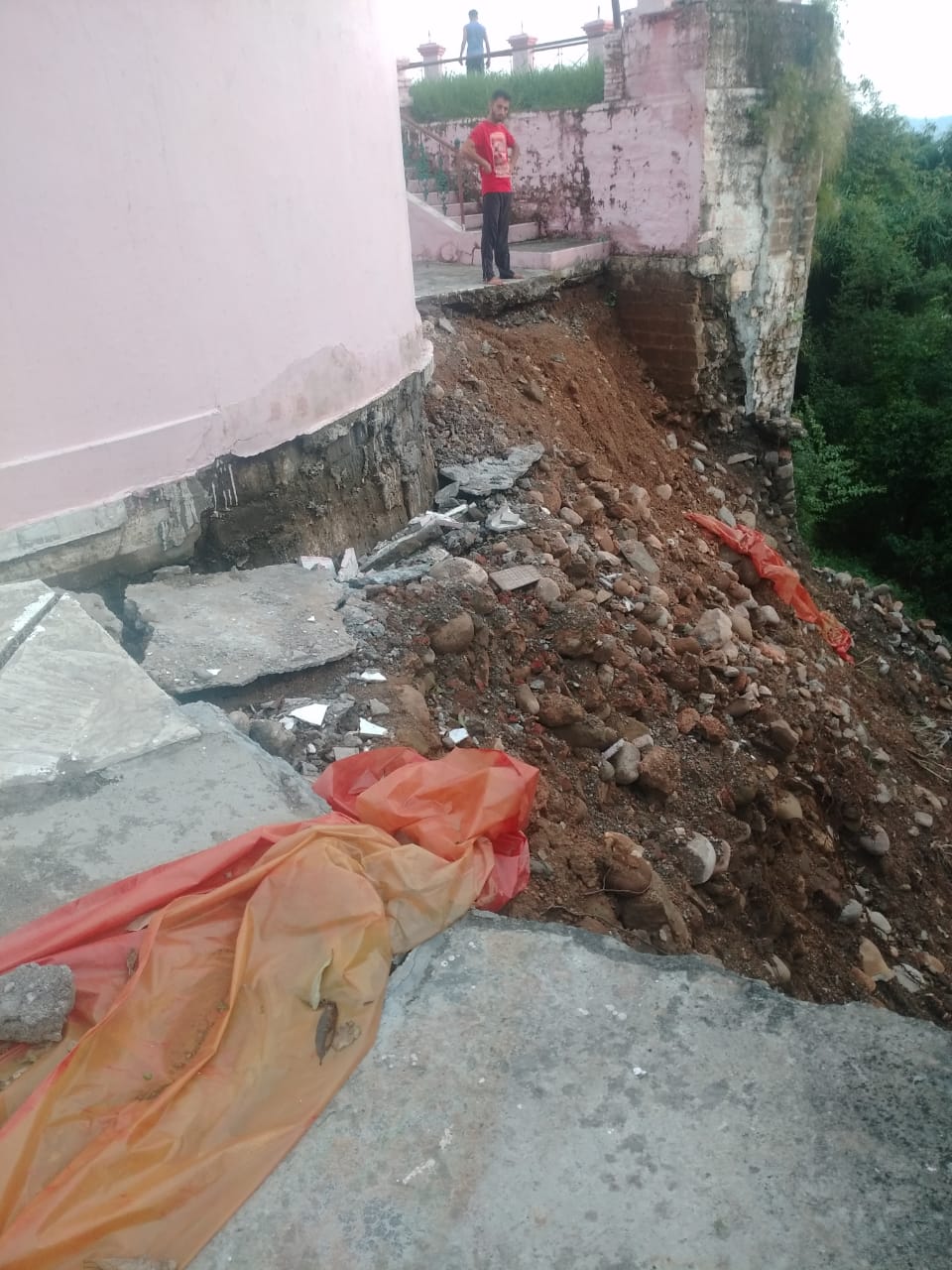 More than six months on, since the reporting of the incident, to the administration, regarding the damage caused to both 600 year old fort and the Chanchlo Mata temple at Basohli, no action in this regard has been taken by any quarter till date.

Both, the historical fort Basohli and Mata Chanchlo Devi temple housed in its premises were badly damaged as a result of landslides during the heavy rains of July 2020. Due to the landslides, all the retaining walls supporting the whole structure got damaged leaving the foundations of the fort and those of the temple exposed. The landslide was so heavy that it took the whole soil of the rocky hill in its spate upto 500 to 600 feet down up to lake level. The structures of the fort and temple look as if hanging in the air and likely to collapse even due to the normal rains. The matter was immediately brought in the knowledge from local administration to His Excellency LG, Hon’ble Advisors, Archeological department of the UT, Archaeological Survey of India,  Hon’ble MOS in PMO (local MP) and finally Hon’ble PM on 14/01/2021 in writing supported by the documents and the photographs of the site.

While the Archeological department Of UT and Archaeological Survey of India expressed their inability to spend even a single penny as according to them the historical monuments of Basohli do not fall under their control and jurisdiction, the entire Administration of UT observed silence over the so important matter, which on the one hand pertains to the national heritage and faith of a lacs of devotees of Maa Chanchlo Devi (Kuldevi) on the other. The local population gave voice to their problem through the print and social media but as the ill-luck would have it the all the informed quarters turned deaf year towards it. The resentment is brewing among the masses due to the careless, cool, inapt and irresponsible attitude of the administration and those of the elected representatives, towards the so important matter linked with the protection of the national heritage and the sentiments and faith of the lacs of devotees of Maa Chanchlo Devi.

It is pertinent to mention here that the fort is the heritage of Dogras and is so beautiful and picturesque that it is considered as the Icon of the Jammu tourism. It is again worth mention here that Hon’ble PM always lays stress on the preservation and maintenance of the national monuments irrespective of the place they are situated in.

The Hon’ble MP whom the Basohli constituency voted more than 95% in his favour, should have shown his concern over the matter by addressing the most pressing and the genuine problems of his constituency and have reaffirmed his full support when and where it is needed most. Before the fort and the temple collapse completely during the summer rains, the UT administration and the Hon’ble MP of Udhampur, Doda and Kathua are requested to take a personal interest in the matter, play their expected role and direct the concerned agencies to plunge in action and repair the fort and the temple on the war footing. Or otherwise, the coming generations will never excuse us for sleeping over the problems. Escaping from the national duty is a sin and crime in the eyes of the constitution.

Social Activist. Can be reached at [email protected]

Sajad Lone’s exit and future of Gupkar Alliance
Target of constructing 40 kilometre roads per day will be achieved by end of March 2021: Gadkari
Comment