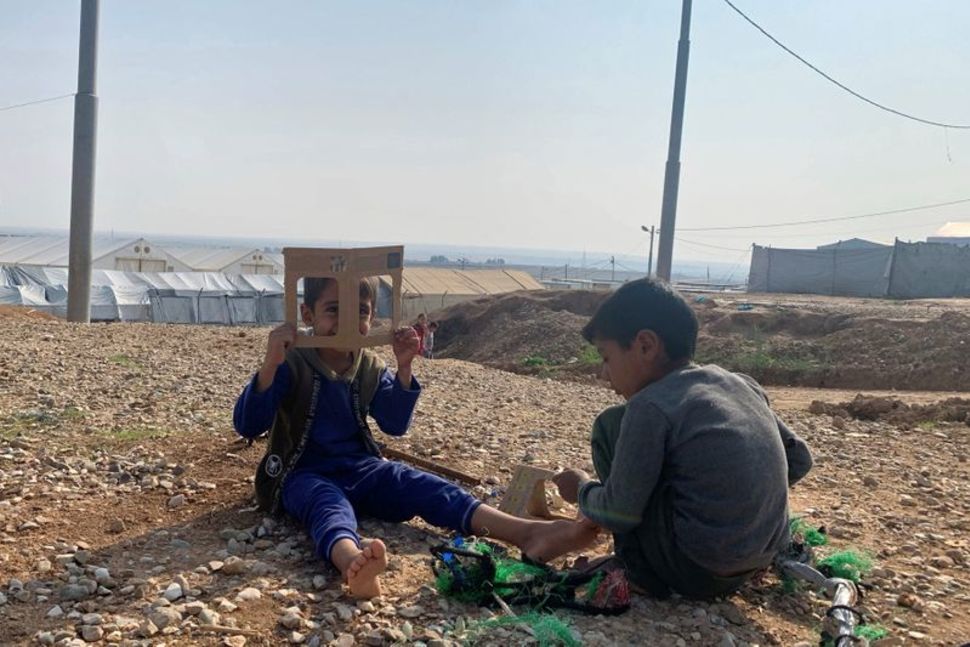 AL KHAZER, Iraq: Excluded, vilified and sometimes simply abandoned: such is the price paid by thousands of children in Iraq born to suspected Islamic State militants.

At the Hassan Sham camp for displaced people in northern Iraq, five-year-old Aisha, whose father disappeared after joining Islamic State, is pestering her mother because she wants to go to school.

“She’s always crying, saying she wants to go to school. But I tell her she can’t: she doesn’t have the nationality,” says her mother, declining to give her name.

Like thousands of other children born to parents who lived in areas governed by Islamic State between 2014 and 2017, Aisha has no official birth certificate, and no easy way to obtain one.

Without papers, basic services including education and health care are difficult to access. In 2018, the Ministry of Education issued a directive allowing undocumented children to register in schools, but humanitarian NGOs say this is not consistently applied on the ground.

“There are a lot of complexities about registering children born during the years ISIS ruled. Many have not been registered yet,” Karl Shembri, the regional media advisor of the Norwegian Refugee Council (NRC), told Reuters.

“They don’t have civil documents, which excludes them from their basic rights as Iraqi citizens,” he said.

In 2019, the NRC estimated that around 45,000 undocumented children were living in Iraqi camps.

To register Aisha with the authorities, her mother said she must first be given security clearance to rule out any ties with Islamic State.

A maze of bureaucracy awaits her, involving local authorities, courts and security agencies, as well as administration fees she says she cannot afford.

In another tent, a mother of eight says she worries most about her grandchild, Dima, who was born at the camp but whose parents were married by Islamic State mullahs in their community in Salahuddin province.

Not only is Dima without an official birth certificate, but her parents did not get a valid marriage licence – required by Iraqi law for the registration of every child.

The Iraqi authorities are aware of the children’s plight. The Ministry of Interior told Reuters that the government has established an inter-ministerial committee tasked with addressing the issue.

Spokesman for the Ministry of Migration Ali Abbas said they counted around 400 families in camps in northern Iraq with children lacking civil documents.

“Children born under ISIS have a problem,” Abbas said. “When there is no marriage certificate, how do we know that a woman is truly the mother of the child?”

Faced with this legal impasse, some mothers are forced into difficult, sometimes unbearable, choices.

“A common practice to resolve that is for the woman to marry someone else as an adoptee, or marry someone in the family, like the husband’s brother,” said senior Iraq analyst at Crisis Group, Lahib Higel.

But fear and hatred of Islamic State persists and children whose fathers had links to the groups are treated as outcasts, preventing their reintegration.

In a tent nearby, the 24 year-old mother of two undocumented children is packing up. She received a marriage proposal, an unexpected opportunity for her to leave the camp and start a new life as the second wife of a man back in her hometown in Salahuddin province.

However, her husband-to-be asked her to come without her children, three and five, and she agreed to leave them behind with their grandmother at the camp.

“She left the children and went to remarry. Her new husband doesn’t want them, he says they are ISIS children,” the grandmother said.

This is not an isolated case, senior researcher at Human Rights Watch, Belkis Wille, told Reuters.

“Many times women will say that their new husband will refuse to take in the new children because they are perceived as ‘contaminated with ISIS blood’, so these children get left behind with dwindling services, no education and away from their mothers,” Wille said.

Holding back the tears as she hugged her children goodbye, the young mother climbed into the taxi that would take her to her new husband. Neighbours soon gathered, promising to help out. The crying children calmed down when they were given sweets, unaware that their mother would not be back.