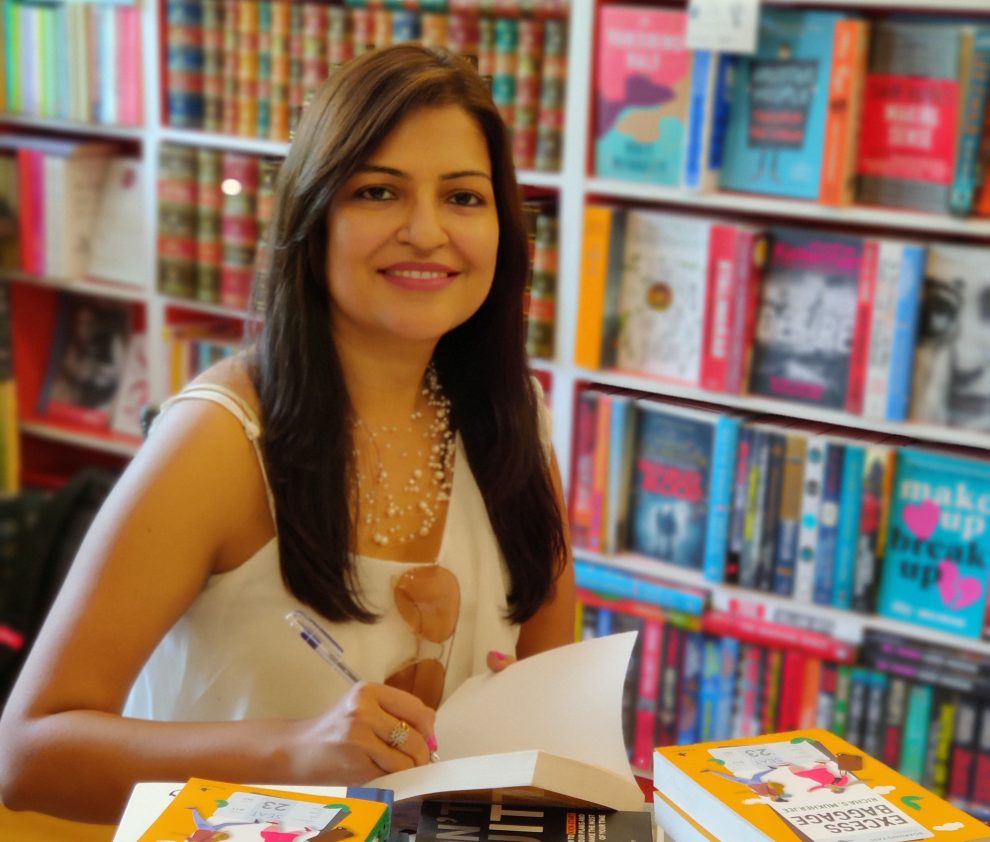 ‘I am an anthropologist, auntie.’

The announcement was followed by pin-drop silence. Some crickets chirped in the distance. After a few seconds of soul searching, one auntie tentatively tried to clear the confusion.

‘Smita, you said she is some kind of doctor?’

‘I am not a doctor,’ Anviksha corrected them, before her mother could wade in with some more wrong information.

‘No, she designs houses,’ Mrs Ganguly corrected her.

‘I do no such thing. Anthropology is a study of humanity. To understand how people, communities, cultures, interact and mould each other.’

That really confused the gaggle of gathered aunties. ‘Badri, my brother’s son, he failed his dental exam,’ offered one. ‘He is also doing something like this I think.’

‘Maybe she is a compounder,’ added another. ‘You know, the ones who help doctors.’

Anviksha felt like a kindergarten teacher with a fresh batch of students. This happened each time some new friends of her mother’s came visiting. Even after explanations they were never quite able to wrap their heads around her profession.

‘I am a sociocultural anthropologist. Let me make this as simple as possible. Umm. In some way, I help people understand why people and societies behave the way they do.’

‘Oh, then say that. You are a sachatrist. Doctor for mental people,’ and Mrs Ganguly beamed with pride as Anviksha visibly deflated. ‘I think you mean psychiatrist. And there is no category of patients called mental people.’

Smita Punjabi, who had disappeared into the kitchen in the midst of this futile game, returned with a large tray filled with glasses. As she set them down, the ice cubes tinkled and danced around in the red liquid. ‘Enough of atropology for one day.’

‘Whatever. I don’t understand all this, nor do my friends. Now serve Rooh Afzaah to all the aunties.’

Once the aunties were served, Anviksha picked up a glass herself, and settled into a chair a little distance away. Taking a big gulp of the sweet cold drink, she was transported to a hot and sunny afternoon when she was about eight years old.

Her mother had been in the kitchen and the radio was on. Anviksha lay on the sofa with her father as he read a book. Her mother had made three tall glasses of Rooh Afzaah and a big bowl full of Fryums. An old Sindhi song, a favourite of her father’s had started playing on the radio, prompting him to drop his book and start swaying to, ‘Dal chola dabal tu khai vad dal. O kaka! O chacha! ’ He would stick his bum out intermittently and little Anviksha would burst into peals of laughter. It was a warm and sticky afternoon, black and white, a perfect memory frozen in time.

‘I was almost arrested once, you know.’

The mention of a criminal past drew Anviksha back to the conversation in the room. It had been Mittal auntie. Finishing her beverage with a loud slurp, she placed it on a side table. Wiping the moisture from her lips with her dupatta, she announced proudly, ‘I was a rebel. There was this lovely red skirt that I wanted but my parents refused. My mother wouldn’t budge, nor my father. So, I waited till they were seated at a restaurant, ran back to the bloody shop and swiped it into my bag. If only that fat cashier hadn’t turned around, no one would have even guessed it was me!’

The group of ladies burst out laughing at this revelation.

This was a weekly gathering they all looked forward to, every month or so, bringing new women into the fold. The attendees hailed from different walks of life, drawn together by their love for food, knowing all too well that more than food, it was the gossip that drew them even closer. It was a sort of potluck-cum-cooking session, sprinkled with conversations on the hot and cold vicissitudes of fortunes in the neighbourhood.

Anviksha knew that her mother was largely responsible for this. She hadn’t known a person more gregarious and desperate for company. Her mother was the kind of person who would host neighbourhood langars at home, inviting everyone from Chunnu ki chachi to Dilip’s uncle’s son’s friend, from the watchman to the dhobi for a free meal.

Smita Punjabi’s doors were always open and so were her ears, ready to take in all they could. It didn’t help that she considered herself a venerated agony aunt, always ready to dole out advice. Unfortunately for her, when it concerned her own daughter, the advice was duly rebuffed.

Anviksha was the antithesis of her mother. Left to her, she could survive for days without any human contact, in a closed windowless room with only food and books for succour, and well, a bathroom. Their contrasting personalities were sufficient to transform the old mosaic tiles of the house into a battleground ever so often. The fact that she lived with her mother had also become the butt of jokes in her rather miniscule circle of friends.

‘What recipe are you teaching us today, Smita?’

‘Sai bhaji. It’s considered a staple but I think it’s a delicacy.’

‘Delicacy? It’s vile!’ blurted Anviksha unwittingly, at the thought of the spinach goop her mother was making out to be some Michelin star food.

Smita Punjabi’s eyes narrowed, ‘Anu! Give things a chance before you talk of them like this!’

‘Like what?’ asked Anviksha. ‘Besides, I’ve been giving it a chance since I was a kid.’

‘Smita, let her be, we should be sympathetic,’ Mrs Mehta broke in. ‘The poor thing.’

Anviksha had a fair idea where this was headed even before she asked the question, ‘Why the pity, auntie?’

‘I get it beta, it is not easy being a divorcee,’ Mrs Mehta clucked.

‘Not at all easy,’ agreed Mrs Lalwani. ‘And being divorced not once, but twice. How do you think she must be feeling?’

Anviksha felt as though she were invisible and the commiserations and clucks were being passed around over her head. ‘Auntie,’ she retorted, ‘I was the one who divorced my first husband and I am very keen on divorcing the second one as well. You make me sound like some helpless chicken!’

‘You might think this is the most exciting thing to have happened to you, but the world has its own beliefs and conventions,’ said her mother.

‘So the D word is anathema to society at large.’

‘What is anthima?’ her mother asked Mrs Lalwani, hoping her friend’s talents extended to the English language as well.

Mrs Ganguly intervened wisely. ‘Forget this why when how what, Onbeekha,’ she said, rechristening Anviksha’s name in Bengali, ‘Trust me, it is still not too late. Your mother tells me the divorce is not final. Call him for a meal, cook up a storm and win him back!’

‘Really, Gulu auntie?’ Anviksha laughed. ‘Win him back with food. It’s that simple?’

‘Of course, what do you think I’ve been doing with Mr Ganguly for years now? Ours was an arranged marriage. Before he could even determine his feelings for me, I started stuffing him like a Christmas turkey. Forty-two years later, he is still in a food coma and now it’s too late to leave me!’ She laughed so hard that it took her some time to catch her breath.

Anviksha stood up with a weary smile. ‘Thanks auntie, but that boat has sailed and I’m really not interested,’ she began to walk away, regretting being trapped at home on the weekend. But the standing committee on human relations was just getting started.

‘What boat? Why is she talking of boats?’ asked one bewildered voice.

‘Ranvijay is seeing another girl,’ explained another.

Anviksha couldn’t tell who said it, but it didn’t matter. She clenched her fist, supremely irritated with her mother for supplying her entire life on a platter to all and sundry. She counted to ten and then turned around with a calm face. ‘In fact, that is correct,’ she said. ‘Now let me tell you all about this very interesting concept called compersion.’

‘Here we go again,’ sighed her mother clutching her head.

‘Conversion?’ asked Gulu auntie, not sure what she had heard.

‘Aaah. A very intelligent man called Luke Brenning proposed a theory, that it is possible for us to feel happy, even good, when someone we love is in another relationship.’

‘Hain?’ was the general response.

‘Yes. So instead of being neurotic and crushed by jealousy, I’m actually happy that my soon to be ex-husband is dilly dallying with a chit of a girl. It’s liberating if you ask me!’

Anviksha walked away grinning at her victory.

Prepping for the Covid Vaccine: Seven tips that could increase the effectiveness of the vaccine
“The Cane-Cutter’s Song”: This novel captures the lives of indentured labourers that went to the West Indies from British India
Comment