Srinagar: Jammu and Kashmir on Tuesday recorded its biggest single-day spike with 4,650 fresh COVID cases, taking the tally to 1,91,869, even as 37 fatalities over the last 24 hours took the toll to 2,458, officials said. Out of the fresh cases, 1,463 were from the Jammu division and 3,187 from the Kashmir division of the union territory, they said. Read more on The Dispatch.

JAMMU: A day after former legislator and Bhartiya Janta Party leader Vikram Randhawa leveled wild and unsubstantiated allegations against Union Minister Dr Jitendra Singh, he has been served a legal notice to  within 24 hours or face civil and criminal proceedings. Jeevesh Nagrath, a counsel for the Minister, today sent a detailed legal notice to Randhawa via email and the whatsapp, a copy of which was circulated to the press. Read more on The Dispatch.

SOPORE:  Inspector General of Police Vijay Kumar on Tuesday said that one of the foreign militant was among those trapped in an ongoing encounter in Sopore. Talking to GNS, the IGP identified him as Hamas alias Asrar alias Saria and said that he was involved in killing two municipal councillors and a policeman in March this year. “He is active for the last two years,” he said. Read more on The Dispatch.

External Affairs Minister Dr S Jaishankar, who is on a four day visit to the UK, held a meeting with Home Secretary Priti Patel in London today.

They signed the Migration and Mobility Partnership Agreement that would facilitate legal travel and encourage talent flows between the two countries. Read more on The Dispatch.

New Delhi:  Government has postponed JEE (Main) – May 2021 session in view of COVID -19 pandemic. The session was scheduled to held at the end of this month. The April session has already been postponed. Read more on The Dispatch.

New Delhi:   Petroleum and Natural Gas Minister Dharmendra Pradhan  remotely flagged off the first supply of UCO, Used Cooking Oil based Biodiesel blended Diesel from Indian Oil’s Tikrikalan Terminal, Delhi. Centre had initiated Expressions of Interest for “Procurement of Bio-diesel produced from Used Cooking Oil” on the occasion of World Biofuel Day on 10th August 2019. Such “Expressions of Interest” are being periodically released by Oil Marketing Companies. Read more on The Dispatch.

New Delhi:  Government has said that Medical Infrastructure of 38 Institutions across 31 States and Union Territories have been strengthened. Union Health Ministry said, Central Government is leading the fight against the COVID19 pandemic in collaboration with the States and UT through a Whole of Government approach. The health infrastructure of several States and UTs has been overwhelmed by the very high number of daily cases and increased mortality. Read more on The Dispatch.

SOPORE: Encounter has started between militants and government forces in Nathipora area of North Kashmir’s Sopore on Tuesday. Reports reaching GNS that a joint team of Police, Army’s 22 RR and CRPF launched a cordon and search operation in Nathipora. As the joint team of forces approached the suspected spot, the hiding militants fired upon the forces, triggering off an gunfight. Read more on The Dispatch.

Erratic Weather Expected In Jammu, Kashmir Divisions Till May 7: MeT

He said moderate rain with thunderstorm, lightning and hailstorm was most likely at Kulgam, Pulwama, Shopian, Anantnag, Srinagar, Budgam, Gulmarg, Ramban-Banihal, and most districts of Jammu during next few hours and dissipate thereafter gradually. Read more on The Dispatch.

SRINAGAR: In view of the overwhelming rise in COVID-19 cases, the University of Kashmir (KU) is likely to conduct pending semester and college exams online. Top officials of the KU told the news agency—Kashmir News Observer (KNO) that the varsity is likely to conduct the pending exams online in view of a surge in COVID-19 cases. Read more on The Dispatch.

New Delhi:  The Ministry of Ayush and the Ministry of Youth Affairs & Sports have tapped into the spirit of International Day of Yoga to encourage the public to pursue Yoga as a daily routine for good health and well-being. The two Ministries came together to organise a virtual event on Sunday to mark 50 days in the countdown to International Day of Yoga 2021. Read more on The Dispatch.

New Delhi:  Karnataka Chief Minister B S Yediyurappa is holding meetings with the stakeholders to tackle over shortage of oxygen and Remdesivir injection in the state. Today afternoon he has called an emergency meeting of drug suppliers followed by an emergency Cabinet meeting to chalk out measures to fulfill urgent medical needs of the Covid patients. AIR correspondent reports that the state reported 44,438 new Covid cases and 239 deaths yesterday. Read more on The Dispatch.

States, UTs have more than 75 lakh COVID vaccine doses, over 48 lakh to be delivered in 3 days: Govt

New Delhi:  More than 75 lakh doses of COVID-19 vaccine are available with states and union territories and they will receive over 48 lakh more within the next three days, the Union health ministry said on Tuesday. The government of India has so far provided 16,69,97,410 vaccine doses to the states and UTs free of cost. Of this, the total consumption, including wastage, is 15,94,75,507, according to ministry data updated at 8 am. Read more on The Dispatch.

Washington: Terming the situation in India very desperate , America’s top public health expert Dr Anthony Fauci has suggested the government marshal all its resources, including the armed forces, to immediately build makeshift field hospitals, and urged other countries to help with not only materials but also personnel. In an exclusive interview to PTI, Fauci, who is the Chief Medical Adviser to US President Joe Biden, also called for a nationwide lockdown, not necessarily for six months but for a few weeks to break the continuity and transmission of infection. Read more on The Dispatch.

New Delhi:  Prime Minister Narendra Modi reviewed the growing need of human resources required for dealing with the crisis of Covid-19 situation in the country. Many important decisions have been taken during the review meeting which will significantly boost availability of medical personnel required for treatment of Covid patients. Among the many decisions, a decision has been taken to postpone NEET-Post Graduate exam for at least four months. Read more on The Dispatch.

New Delhi:  Government has issued guidelines for ‘Production Linked Incentive Scheme for the Food Processing Industry (PLISFPI). Minister of Food Processing Industry Narendra Singh Tomar also launched an online portal for the PLISFPI. The Ministry said, as part of the Prime Minister’s announcement of Aatmanirbhar Bharat Abhiyan, the Government  has approved a new Central Sector Scheme namely PLISFPI for implementation during 2021-22 to 2026-27 with an outlay of 10 thousand 900 crore rupees. The aim is to support creation of global food manufacturing champions commensurate with India’s natural resource endowment and support Indian brands of food products in the international markets. Read more on The Dispatch.

New Delhi:  India’s vaccination drive against COVID-19 continues with added momentum and has crossed the cumulative tally of over 15 crore 89 lakh doses so far.  In the World’s largest vaccination programme the nation administered more than 17 lakh doses of COVID vaccine in the last 24 hours. The Health Ministry has informed that in a span of 108 days since the beginning of the vaccination drive, the country has so far successfully given the first dose of vaccine to nearly 13 crore people. On the other hand, around than 2 crore 90 lakh people have been fully vaccinated with both the required doses. Read more on The Dispatch.

New Delhi:  The number of total active cases of COVID-19 in the country further swelled up today to comprise nearly 17 percent of the total reported cases. The Health Ministry has informed that currently over 34 lakh 47 thousand people are reported to be suffering from the viral pandemic and are either hospitalised or are under home isolation.

In the last 24 hours, the nation registered 3 lakh 57 thousand 229 new COVID cases. With this the recovery rate has further slipped to stand at 81.91 per cent. Read more on The Dispatch.

JAMMU: Government has on Tuesday constituted a four-member panel mandating it to carry an in-depth examination of alleged illegal activities and operations of stone crusher units in and around river Tawi in contravention to the directions of the Jammu and Kashmir High Court.

The Committee as per order, of which a copy lies in possession of Srinagar-based news agency Global News Service (GNS), would be presided over by O.P Bhagat, Director Geology and Mining, J&K as Chairman alongside R.C Kotwal, Director Finance I&C with additional charge of Mining Department; Romesh Gandotra, Assistant Mining Engineer as members and Dr. Raj Kumar, In-charge Deputy Director, Geology and Mining as Member Secretary. Read more on The Dispatch.

Srinagar: The administration of Jammu & Kashmir has identified 100 kanals of land for its use as a small arms firing range by Army in Samba district of Jammu province. Documents accessed by news agency—Kashmir News Observer(KNO) reveals that alternate land measuring 100 kanals of land at village Deon (Parmandal), Bari Brahmna has been identified for establishment of small arms firing range.

“Revenue documents have been prepared by Tehsildar concerned. A joint verification was also conducted by sub-divisional magistrate Vijaypur and Army authorities regarding suitability of FFR and the suitability report from the Army authorities has not been received so far,” reads the documents. Read more on The Dispatch.

SRINAGAR: The proposed visit of several Union Ministers and nine Members of Parliament including some Union Cabinet Ministers have deferred their proposed visit to Kashmir in view of surge in COVID19 cases. Sources told the news agency—Kashmir News Observer (KNO) that they were proposed to arrive in Kashmir on three day visit current month. “The MPs were scheduled to take part in a day long conclave on TV show organized by ANN News wherein they would also share the stage with prominent journalists, medicos, advocates, and other civil society members to debate,” sources said. Read more on The Dispatch.

New Delhi: Former Union minister and Jammu and Kashmir governor Jagmohan, 93, has passed away after a spell of illness. He died on Monday. A number of dignitaries including Prime Minister Narendra Modi paid rich tributes to him on Tuesday. “Jagmohan Ji’s demise is a monumental loss for our nation. He was an exemplary administrator and a renowned scholar. He always worked towards the betterment of India. His ministerial tenure was marked by innovative policy making. Condolences to his family and admirers. Om Shanti,” Modi tweeted. Read more on The Dispatch. 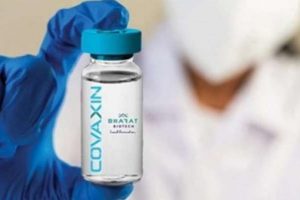 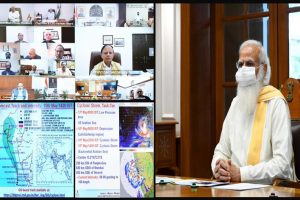