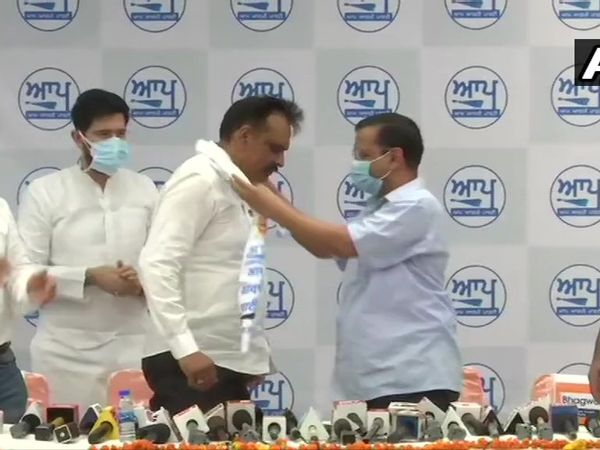 In a boost to the Aam Aadmi Party (AAP) in Punjab ahead of Assembly elections slated for next year, former IPS officer Kunwar Vijay Pratap Singh on Monday joined the outfit in presence of Delhi Chief Minister Arvind Kejriwal in Amritsar.

“Kunwar Vijay Pratap is not a politician. He was called ‘aam aadmi ka policewala’. We all are here to serve the nation. With this sentiment, he has joined the party today,” said Kejriwal after induction of the former IPS officer in the AAP.

The Delhi CM, who arrived in Amritsar for a day-long visit today, faced protests from the workers of Shiromani Akali Dal (SAD). The SAD members showed black flags to the Delhi chief minister over the Gurdwara Sheesh Ganj Sahib issue.

Kejriwal’s visit to Punjab assumes huge significance for his party as former IPS officer Kunwar Vijay Pratap Singh, who was part of the SIT probing the 2015 Kotkapura police firing incident in Punjab, has been inducted in the AAP.

“I want to assure the people of Punjab that AAP will make sure that culprits in the Bargari sacrilege case will be punished and justice is served,” said the  Aam Aadmi Party (AAP) leader. “Aam Aadmi Party’s CM candidate for Punjab will be from the Sikh community. It will be someone whom the whole of Punjab feels proud of,” he added.

“Punjab wants change. The only hope is the AAP. See you tomorrow at Amritsar,” Kejriwal had tweeted on Sunday.

The visit comes as his party suffered a massive setback after Punjab Ekta Party led by former AAP leader Sukhpal Singh Khaira decided to join hands with the Congress on June 17. Khaira had been a member of the Congress and switched to the AAP in 2015.

This will be his second visit to the state in nearly three months. During his last visit in March, Kejriwal hit out at the Amarinder Singh-led Punjab government, accusing it of not keeping its poll promises and deceiving people.

Last week, Kejriwal had visited Gujarat to strengthen the party and has announced to contest elections on all Assembly seats in the two states next year.