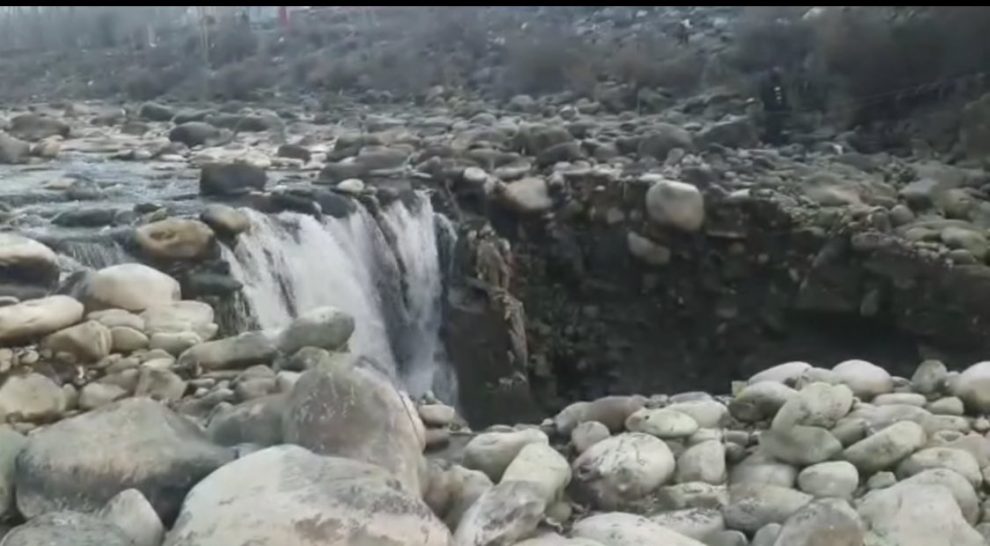 Jammu: A popular trout angling stream has suddenly disappeared in Kashmir after it was swallowed by a massive sinkhole. Experts say it has caused immeasurable damage to aquatic life, including to trout fish.

The administration has enforced restrictions under section 144 and asked people not to venture near the sinkhole as nobody knows the outlet of the sinkhole and people are worried that it may cause a collapse of land due to denudations and threaten life and property in the area.

After the sudden death of a freshwater stream, around a 20 km long stretch of a famous trout stream in the Anantnag district has dried up. Locals fear for their safety as it appears the entire stream has been swallowed by the sinkhole. Efforts by the administration to divert water have not succeeded.

“The river has disappeared. The government should do something. We are worried about drinking water and irrigation. Even our land can collapse. What’s the guarantee our village is safe?” said Bashir Ahmad, a local.

A large number of fish including trout have perished in the dying stream. Officials, however, say they saved as many trout as they could and shifted them to other water bodies.

“Some fish were in the pool beneath the downstream. We shifted them to safer destinations. These things are beyond one’s control. Whatever measures and steps we were supposed to take, we took them swiftly,” said Mohammad Sidique Wani, Deputy Director, Department of Fisheries.

“As the entire water was diverted through this channel, it hampered the flow but is dribbling forward. Also, the discharge to the sinkhole has considerably comedown after diversion,” he told greater Kashmir.

AEE said, “We will treat the sinkhole once we get the recommendations from the expert committee.”

Experts believe it to be a natural phenomenon formed due to the gradual chemical dissolution of limestone rocks in the river.

However, they have suggested geophysical and gravity surveys to ascertain the path of the conduit- underground river system and to prevent any disaster.

Experts have also warned that any blockage in the underground channels can lead to a sudden burst of water causing localized floods.

Earlier, in the year 1995, one such sinkhole developed in the stream a few meters above the same area which was later filled up with sand and gravel.

The water of that channel had later found a discharge at Achabal.

However, as of now a team of Public Health Engineering, flood control, irrigation department (Jal Shakti) Department with the officials of Geology and Mining Department, monitoring the situation, has yet to find the outlet of this sinkhole gulping the water.

Several kilometres of the stream have dried up disturbing flora and fauna.

The irrigation system and water supply in the villages which rely on the waters of Brengi Nallah (stream) have also been severely affected.

Meanwhile, authorities today warned media persons against moving close to the sinkhole saying they posed a threat to themselves as well as attract the general public there.

“It has been observed that despite restrictions being imposed on any assembly of general public or movement of individuals near sinkhole at Wandevalgam on February 11, 2022 by Sub Divisional Magistrate Kokernag, a number of media personnel continue to move close to and into the sinkhole, posing threat to their own life,” Tehsildar Kokernag said in an advisory issued today.

“This, in turn, attracts the general public near the sinkhole, which increases the threat to life and makes crowd control difficult for the administration,” reads the advisory, adding, “Hence all media personnel are hereby advised and warned not to violate the restrictions imposed around the sinkhole.”

He said action under relevant sections of law would be taken against anyone found violating the order.