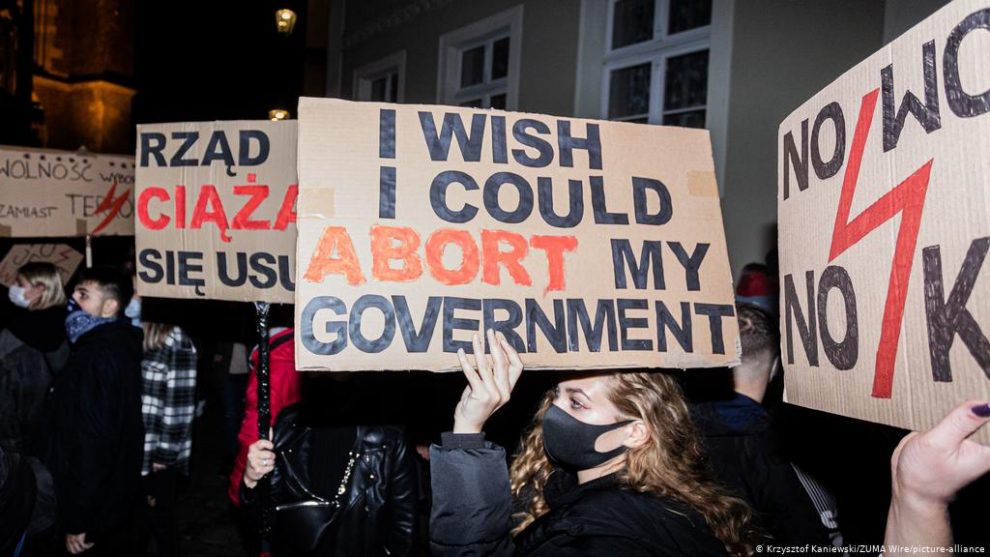 The year 2020 witnessed a number of protest movements in Europe spread out from the eastern part of Europe to its western part. While in the eastern part of Europe, people in Belarus struggled with the ideas of liberty and democracy, some specific liberty of choices with regard to women were at stake in Poland this year. Other protests by people in countries like Germany, France, Italy, Spain, Bulgaria, Belgium was about expressing dissatisfaction with their government on different accounts.

The most important and probably the biggest protests in the last thirty years took place in Minsk, Belarus with the aim of toppling the last dictator in the eastern part of Europe in Belarus, Alyaksandr Lukashenka. While the protest in Belarus remains still active, the limited media presence and media feedback from inside the country has made it challenging for the world to keep track of the developments inside Belarus. The international media was asked to leave the country on the end of August this year after a strong peoples protest engulfed the country over a fraudulent election which brought back the dictator to power.  However, what has kept the world waiting is, if at all a peaceful transition of power is possible.  A calibrated approach by all major actors especially Russia, European Union, and the US for ensuring a peaceful transition of power from the current dictator Alyaksandr Lukashenka to a democratically elected government is taking the situation to a status quo. Russia has recognised the government of Lukashenka after the elections while the European Union and the US deny recognising the government. EU has put phased sanctions on Belarus to put pressures on acquaintances of Lukashenko and the business entities supporting it. The opposition is mainly spearheaded by the leader Svyatlana Tsikhanouskaya who is based in Lithuania presently and building up resistance by seeking support from the western world.

Poland presents a unique case for the assertion of women’s rights and a build-up of a feminist movement in the post-communist era through a strong protest that erupted in October 2020. Tightening of abortion laws was recently brought in Poland through a court ruling. The right-wing ruling party ( Law and Justice Party) has supposedly used their influence in the judiciary to push through this controversial and debatable law. The build-up of resistance against this law has been successful despite coronavirus lockdown measures in force. Abortion laws have always been very strict in Poland but what has been different this time is, that foetal impairment no more remains a necessary condition for abortion. Statistics suggest that around 98 per cent of abortions in Poland happen due to foetal impairment. Hence doing away of this condition amounts to the almost total ban on abortion in Poland. Earlier Poland allowed abortion in three cases. They are- if the pregnancy was the result of rape or incest, if there were evidence of foetal impairment or if the pregnant women’s life was in danger. The new ruling if notified will take away the right to abort a child even if it is suffering from impairment or deformities. Church groups and the conservatives have been widely supporting this law.

Europe presented a unique picture of different anti-government sentiments. On one hand, protests happened to question government’s lockdown measures while other protests happened despite the lockdown measures in force. An essential element of registering discomfort with the government policies was presented through a number of protests that erupted in different countries of Europe and had different motives and different demands from the government. But one movement united the entire world together – “Black Lives Matter”. Though the origin of this movement was in the United States, it engulfed all major countries of Europe as well and triggered debates on questions of Systemic Racism as well as Institutional denial that continues to persist.
On the other hand, many protests were the result of restrictions imposed on social life by different governments in Europe. France, Italy, Spain and Germany saw violent anti lockdown protests by October, November 2020 when the second lockdown measures were about to be enforced. The largest among them took place in Berlin, Germany. The protests in Germany were mainly led by far-right groups with comparisons of wartime imageries of life under Nazi Germany.

Another important protest movement was the direct result of the coronavirus pandemic and was led by those who were leading from the front to tackle it- the healthcare workers. Countries like Belgium, France, Spain, Italy witnessed protests by their healthcare workers, who registered their dissatisfaction with their respective governments with regard to lack of preparedness in handling the pandemic. Other important demands articulated were that of insufficient working conditions during the pandemic as well as a cut in social security spending by governments among others.  Though the protests by healthcare workers can be seen as being limited in participation as it involved a particular professional group, it has resonated with the wider public in conscience and cause.

But it was not just aftermath of the coronavirus that agitated and empowered people to hit the streets, it was also issues of governance and corruption which forced people to come out of their home, not caring for risks associated with the pandemic to make their voices heard. One notable example is Bulgaria. Sophia witnessed a strong anti-corruption movement against their government in July 2020.  Bulgaria remains the most corrupt country in 27 member European Union according to a non-profit organisation Transparency International. The people’s protest demanded the immediate resignation of the Prime Minister, Boyko Borisov even though the elections are due in March next year. Government has acted in a conciliatory manner and has offered to step down while three ministers of the ruling government have already stepped down after the protests erupted.

France witnessed a number of protests apart from the Black Lives Matter and few others already mentioned. Especially since the killing of the French teacher Samuel Patty, a number of protests have happened against the killing of the teacher. The latest protest erupted in the months of November and December 2020  and was aimed at the controversial security bill that places restrictions on the filming of police officers on duty ( photos or videos). Huge protests have erupted against the bill, calling it out for curbing media freedom and enabling police excesses.

In conclusion, Europe remained an interesting place for the assertion of rights and freedoms in different countries in different ways. In some cases, the restrictions in social life brought by the governments were the bone of contention, in other cases like Poland, Bulgaria, Belarus, protests happened despite the lockdown restrictions in place. People came out to assert their voices for what they thought more important than being safe from the pandemic. Protests by healthcare workers and protests against lockdown measures will remain an important event to reflect back to from future, while the outcome of Belarus protests are still awaited, the fact that this year instigated it to such a strong level will make it special in times to come.

Independent analyst based in France

Brexit: A year of the UK-EU transition talks and finally, a Deal
Ethiopia: The conflict in Tigray and the regional fallouts
Comment