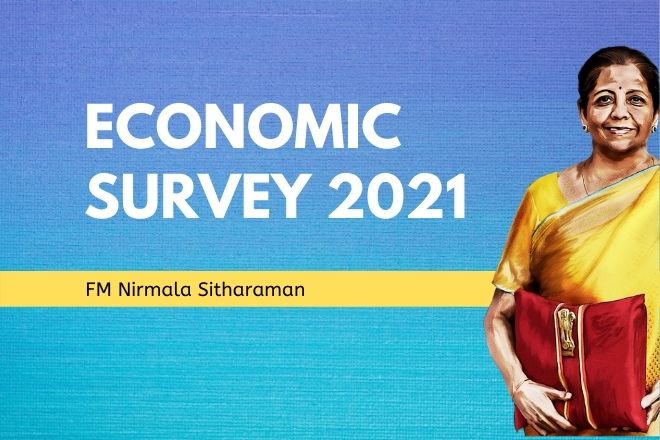 India is poised to grow despite the pandemic panic shock during a critical financial year when all budget projections had gone awry thanks to total countrywide shutdown of all production, predicts Economic Survey 2020-21. Agriculture alone is growing at 3.4%.

Importantly, the survey is positive on future real GDP growth for 2021-22 at 11% despite the economy being in recession leading to gross domestic product (GDP) contraction of a record (-) 23.9% in April-June and full contraction of 7.7% during the year. The Survey while praising the lockdown, notes that the economy is technically in a recession due to the severe contractions.

This path, with 11% real GDP growth in FY22 would entail a growth of 2.4%   over the absolute level of FY20, implying that the economy would take two years to reach and go past the pre-pandemic level. The Survey also estimates the real GDP to grow at its trend rate of 6.5% in FY23 and 7% in FY24, aided by structural reforms.

(The National Statistics Office revised the GDP growth rate for 2020-21to 4% from 4.2% earlier mainly due to contraction in manufacturing and construction on 28 January.)

The growth is to be achieved on such low base through spending more as there is impulse for “expansionary fiscal policy”, in short the prescription is to follow the Hindu Charvak philosophy of resorting to high debt and be spendthrift for “a happier life” and political dividend as well.

It is an indication that the budget is to have high fiscal deficit, may be around 7.5% and likely to resort to tough measures to raise the revenue. It might not be easy on taxes though the room for actually raising it is limited as the industry is keen on softening of the tax regime even on personal income-tax to create an environment for increasing purchasing power.

Chief Economic Adviser K V Subramanian says economic growth leads to debt sustainability and even if India were to have real GDP growth rate as low as 3.8% each year from 2022-23 to 2028-29 the country’s debt levels will still come down. Subramanian further said India has a track record of having adopted expansionary fiscal policy focused on infrastructure spending.

So as imagined it will be a five-year budgetary process and not a recovery in two years to undo the pandemic recession. The Fitch Rating agency earlier had indicated that it would take five years to get to the pre-pandemic level.

The Survey severely criticizes Moody’s, S&P as “noisy, opaque and biased”. It adds that the fiscal policy “must not remain beholden to such noisy/biased measures and should be guided by considerations of growth and development rather than be restrained by biased subjective sovereign credits”.

A study sponsored by RBI in mid-2020 by Survey of Professional Forecasters is also not very different from the sovereign agencies. It avers, “Real GDP is likely to contract by 1.5% in 2020-21 but is expected to revert to growth terrain next year, when it is likely to grow by 7.2%”.

The Survey projects that to 11% possibly on better data. But credit agencies globally keep a tab on different growth parameters and even the IMF and World Bank do not wish them away. While the Survey extols borrowings, its expectations are bit speculative. Usually sovereign borrowings lead to inflation and act as check on growth. Of late, inflation despite some moderation has been high, including that of food, despite a liberal food dole to over 80,000 crore people.

Largely the 2021-22 projections are based on “V” shaped recovery in the second half on a low-base effect of 2020-21; recovery in pent-up demand; high liquidity and low interest rates driving credit — a measure that is hitting the banking sector; supply side reforms through easing of regulations to increase investment!; spending on manufacturing (provided there is demand growth); and speculative arena of hopes of rise in discretionary consumption of vaccine roll-out!

One major aspect of all these aspirations is the RBI revenue pay-out. The CARE Ratings says that the Central Bank’s earnings, which build a surplus and contribute to the country’s non-tax revenue may be dented due to low-yielding US dollar assets, and also due to payment of interest to banks in reverse revenue repo.

Its earnings were hit by low-interest rates. This would lead to lower dividend payment by the RBI, which had squeezed itself in paying over Rs 2 lakh to pay dividend during the last two years. The Survey has not taken this aspect into its calculations.

While it has laid stress on rising R&D spending to 3% from 1.5%, noting more than half of it was done by the Government, it has not taken note of the ground reality that most research in academia-related institutions are not in proper direction and may be a great waste due to the lack of a proper methodology.

The Survey has stood by the farm laws and labour codes saying these are instruments of growth and sustains the view by citing of 21 reports since 2001. While the views are fine it has overstressed the benefits of 1991 reforms, often called Manmohanomics.

The nation in the 30th year of liberalization needs to have a vociferous debate on the “liberalization and new economy”. It needs to study the linkage of present farm stress and protests and look for remedies. Its stress on reforms may not be as ideal as the Survey has projected.

However, it gives a cue to the budget proposals, which may have large doses of allocations for various supposed “development and construction” projects as it benefits certain industries. All in all the Survey is hopeful on the repaying capacity of high projected borrowings but also indicates many distresses like credit delinquency, asset quality review of banks, recapitalization and substantial reform of banks. This could pose a severe squeeze on corporate borrowers indicating that the optimism on the overall economy may not be as easy to achieve. The nation is not on an easy path despite a rosy projection