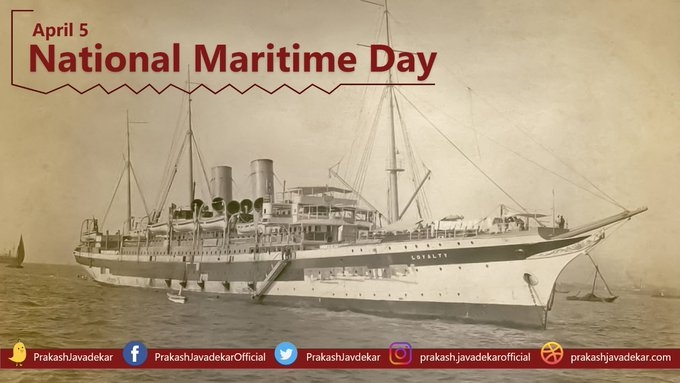 On National Maritime Day today, Environment Minister Prakash Javadekar has congratulated all naval officers and sailors and greeted them for their contribution. In a tweet, Mr. Javadekar said, the government is committed for the protection of marine environment.

The 5th of April, a landmark date in the navigation history of India, is celebrated every year as the National Maritime Day. In India, more than 90% of the goods of a country’s trade are moved through maritime transport.

The number of vessels in the Indian Shipping Register has increased from a paltry 59 in the year 1947 to an impressive 1,392 ships in 2019, with the gross tonnage rising commensurately to over 12 million GRT.

Although World Maritime Day is celebrated in the last week of September of each year, India’s National Maritime Day is the culmination of the ‘Merchant Navy Week’, which has been celebrated since 1964 to commemorate India’s entry into the international mercantile shipping community in 1919.

Indian shipping embarked on its maiden voyage on 5th April in 1919 when India’s first merchant vessel, the SS Loyalty, journeyed from Mumbai to London.