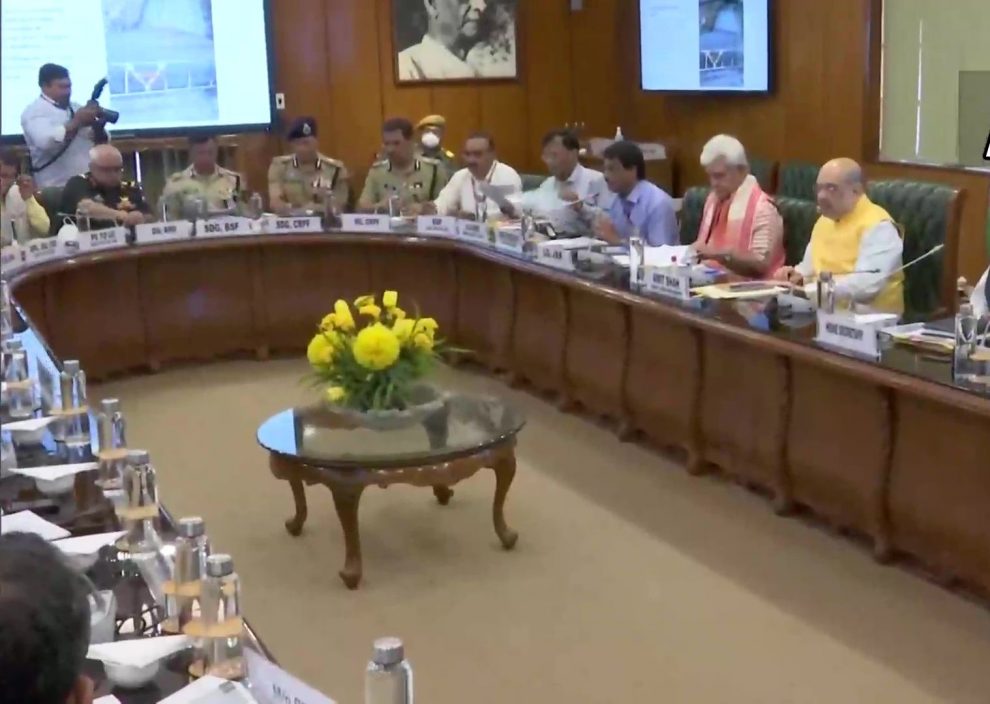 Sources privy to the meeting said that top officials of MHA, national security advisor Ajit Doval, Director Intelligence Bureau and Chief Secretary J&K besides a galaxy of officials from security grid of the country were also present.

“The Home Minister stressed on the round-the-clock monitoring and tracking of every single pilgrim who would undertake the Amarnath pilgrimage. He also directed the officials to take concrete measures for the protection of minorities, especially KPs,” sources said. The LG Manoj Sinha and DGP Singh briefed HM about the series of steps taken for ensuring a smooth and hassle-free Amarnath pilgrimage and also the measures for the protection of minorities.

The recent killing of KP employee Rahul Bhat and the protest triggered by his killings also came up in the meeting. Bhat was killed inside Tehsil office Chadoora, Budgam by militants.

J&K Chief Secretary Arun Kumar Mehta briefed the meeting about the measures taken to ensure the safety and security of Amarnath pilgrims. As per an official handout, the CS stated: “For the first time, every Amarnath Yatri would be given a RFID card and would be insured for Rs. 5 lakh. A tent city, WiFi hotspots and proper lighting will be arranged on the yatra’s travel route. Along with this, online live Darshan of Baba Barfani, live telecast of the morning and evening aarti at the holy Amarnath Cave and religious and cultural programs will be organized at the Base Camp.”

The Union Home Minister said that it is the priority of the Modi Government that the pilgrims coming for the Amarnath Yatra should have hassle-free Darshan and they should not face any problems. “Shah directed that arrangements should be made for all essential facilities including movement, lodging, electricity, water, communication, and health of the Amarnath yatris,” the statement said. “He said that this is the first journey after the COVID-19 pandemic and in case yatris have any kind of health-related problems due to the high altitude, then adequate arrangements will have to be made. The Union Home Minister said that number of mobile towers should be increased on the Yatra route for better communication and dissemination of information, he also instructed the deployment of equipment to open the route immediately in case of landslides.”

The statement said that Shah also directed that it should be ensured that there should be an adequate number of oxygen cylinders, an adequate number of medical beds at altitudes above 6,000 feet and deployment of ambulances and helicopters to deal with any emergency medical situations. “All types of transport services should be increased during the Amarnath Yatra for the convenience of yatris,” it added—(KNO)