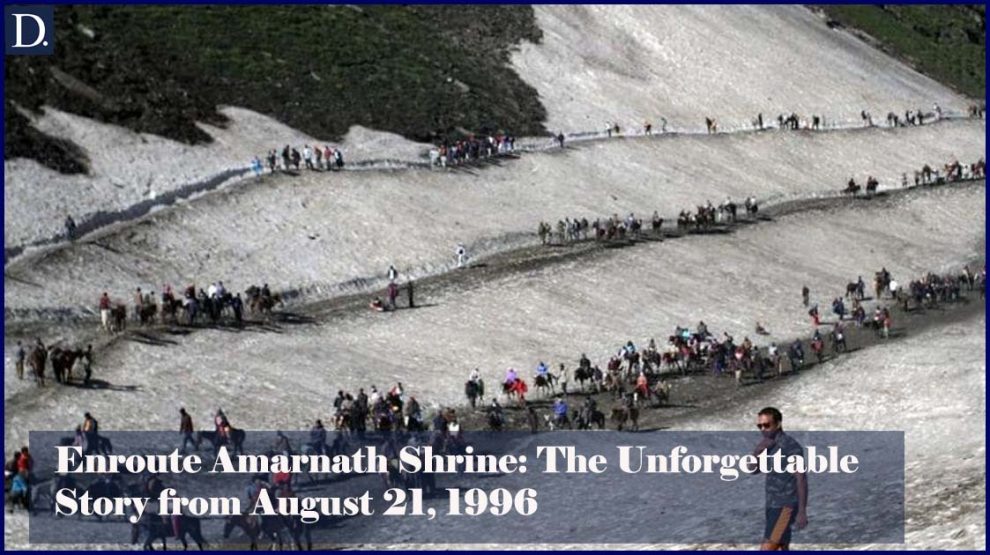 Zafar Choudhary
Add Comment
Even as the shrine was discovered in 1852, the recorded data of more organised annual pilgrimage is available since 1960. Year after year pilgrims have lost lives due to bad health and hostile weather conditions but it was in 1996 that a major calamity shocked not only the country but the whole world.

Jammu: Answering the call of faith, the pilgrims to Shri Amarnath shrine in the south Kashmir Himalayas take one of the most difficult treks in the world at the height of 3,888 meters where temperature often dips to sub-zero levels.

As the authorities struggle with rescue operations after Friday’s massive cloudburst which has claimed more than 15 lives, a look at the past suggests that no year has gone without tragedy.

Even as the shrine was discovered in 1852, the recorded data of more organised annual pilgrimage is available since 1960. Year after year pilgrims have lost lives due to bad health and hostile weather conditions but it was in 1996 that a major calamity shocked not only the country but the whole world.

Recorded as one of the major climatic tragedies in the world, the 1996 cloudburst and torrential rains caused death of as many as 242 pilgrims. Unofficial claims had out the death toll at a much higher number. With close to a lakh pilgrims stuck at different stages of the track and rain not ceasing to lash, the aftermath of the tragedy was one of the most difficult rescue operations India faced in decades.

Back in 1996, the Yatra to Amrnath shrine was not as organised and regulated as it is being conducted by the Raj Bhawan manned Shri Amarnath Shrine Board since 2001.

The Board was formed by an Act of Jammu and Kashmir Legislative Assembly under Farooq Abdullah’s National Conference regime following recommendations of Nitish Sengupta Commission.

Before the Board, the regulatory, management and security roles oscillated between the State Government and the Army with everyone pitching in at will and none willing to take the blame. A lack of coordination between Government Gen K.V. Krishnarao led State Government and Army was also one of the reasons that crucial management elements such as weather, rescue capabilities and infrastructure were not factored in.

Since the reported data of 1963, the annual number of pilgrims had remained below 50,000 till 1988-89 when it began dipping to less than five thousand. In the early 1990s, the yatra came under the militant threat, particularly following Babri Masjid demolition in 1992. Only a few pilgrims would come till 1996 under strict security arrangements.

In 1996 everyone was trying to enforce normalcy much the situation was ready to be normal. Elections to the State Assembly had been announced in August with the first round of polling scheduled for September 7. Also in the normalcy race, several militant groups issued statements of welcome for Amarnath pilgrims as some called them their ‘holy guests’. Governor Gen Rao’s administration and the Army’s Northern Command under Lieutenant General Surinder Singh found the yatra number a good idea to present the normalcy picture. From under 5,000 pilgrims in 1995, the resource-stressed and infrastructure deficient tracks leading to the holy cave shrine saw over one lakh pilgrims at different stages of up and down journey.

The weather forecasting as not as advanced back then as it is today, but a team from the meteorological department did visit the yatra track a week ahead and reported on the possibility of rains. No one had expected the level, intensity and length of rains as what unfolded on the evening of August 21, 1996.

Freezing rain and snow blizzards began to hit everywhere. Havoc continued for three days plummeting the temperatures plunged to well below zero. For the record number of 1.25 lakh pilgrims, at different stages of their journey, the 47-Kilometer-long trek became a way to death.

A significant amount of time got wasted in taking the final call on rescue operations and dividing roles between administration and the Army. Finally, army and air force helicopters ferried survivors to hospitals. There are two routes from Pahalgam to Srinagar -via Anantnag and via Bijbehara. The Bijbehara route was too risky for the Army to thrown open for emergency transport. Injured and dead were evacuated by air and road to Srinagar. Over 20,000 injured and sick were evacuated by air and road while more than 72,000 had to make the return journey on their own to the nearest available transport.

The authorities had pitched around 1200 tents which could accommodate 30,000 persons. But according to Government’s own estimates the number of pilgrims enroute was almost thrice the capacity of tents and other connected infrastructure.

The communication infrastructure, as anyone could imagine, was limited at that time. The pilgrims leaving the base camp would have no idea of what happening enroute or close to the case shrine. There were advance warnings and advisories against taking the journey when it rained. But staying back in the tents was no better than taking the trek even when as the rain poured. Thousands were thus exposed to the hostile weather.

It was a war like situation. There was panic and chaos everywhere. No had any clue what to do. Pilgrims traveling in groups ran for their own safety amid fear of losing their loved ones. To keep walking appeared the only option as tents were giving in the rains, the blankets and warm cloths were wet. It was difficult even for the young and healthy to keep the hopes high as they saw many on the way losing battles on the slippery slopes.

Cremating the dead and making injured reach homes was a huge challenge for the system. Families of the most of the dead agreed for cremation in Srinagar and some made arrangements for ferrying home. Identifying the dead was another challenge. As many as 87 bodies couldn’t be identified. The Doordarshan ran photographs of the dead for a number of days but in many cases, faces were disfigured by the injuries beyond recognition.

While the recue operation was still on, the air was filled with pain and grief, Jammu and Kashmir went to first phase of polls on September 7. The elections were happening after a long central rule of six years -longest in the democratic history of Jammu and Kashmir. National Conference came to power with thumping majority. Among the first few decisions his government took, Chief Minister Farooq Abdullah set up a Commission under renowned civil servant and academic Nitish Sengupta. The Sengupta Commission, among other recommendations, suggested for formation of a Board to manage the pilgrimage. In year 2000, the Farooq Abdullah government piloted the Shri Amarnath Shrine Board Bill which was passed by the Assembly which provided for a board with Governor as its Chairman.

The Sengupta report, among other things, had recommended capping the number of pilgrims to one lakh and period of pilgrimage to one month. The Commission had also called for capping the daily number of pilgrims on the yatra route. The Government and Shrine Board have, however, have revised these limited to the upper side with the upgrade in facilities.