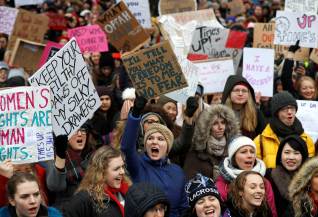 LONDON: Maya Tutton was 12 when men started noticing her. Even her school uniform did not deter their explicit gestures or lewd comments – casual street harassment she learnt to endure.

It wasn’t until her little sister Gemma started getting the same unwanted attention – at the age of 11 – that Tutton decided enough was enough, and launched a nationwide campaign with her sibling to outlaw street harassment in Britain.

The pair joined what is a growing global movement to tackle public sexual harassment, a range of abuse that spans cat-calling, wolf-whistling, unwanted advances and sexual gestures.

“I felt completely powerless about it. When it’s happening to you, you tend to normalise it and think it’s ok,” said Tutton, who is now 21.

“But when it’s happening to someone you love and want to protect, it really drove home that it’s so wrong that it’s a normal part of being a girl to be harassed on the street,” she told the Thomson Reuters Foundation.

So she and Gemma, now 16, co-founded Our Streets Now in 2019, and have since collected more than 220,000 signatures in support – part of a Europe-wide push to make streets more female-friendly.

Nearly one in five women and girls suffered physical or sexual violence in the last 12 months, according to UN Women.

The United Nations agency said less than 40% of the women and girls worldwide who had experienced violence report their abuse, and less than 10% turned to the police for help.

“What we’re calling for is a specific piece of legislation that would stand alone and guarantee women and girls equal access to their civil rights which is to access public space freely and equally without fear and without being intimidated,” said Tutton.

Britain has legal protections against workplace sexual harassment, and in 2019, an ‘upskirting’ law was passed to prosecute people who take intimate photos under women’s clothes without their consent.

But women’s rights activists have long called for more protections, which already exist for race, religion, sexual orientation, disability and transgender identity and can lead to harsher penalties for those convicted.

In September, Britain’s Law Commision – an independent body that recommends legal change – called for misogyny to be made into a hate crime in England and Wales.

“We’re just fed up with (street harassment) being accepted and normalised. We all deserve to feel safe and currently the legislation there is really lacking,” said Tutton.

France outlawed such street harassment in 2018, opening up cat-callers and aggressively lecherous individuals to potential on-the-spot fines of 750 euros ($890).

Predatory remarks and wolf-whistles are a common complaint in France. The law, introduced as part of tougher legislation to fight sexual violence, penalises sexist or sexual words or behaviour that are hostile, degrade, humiliate or intimidate.

Police have issued more than 2,100 fines for street harassment, according to the latest French government data.

“Women’s bodies do not belong to anyone other than themselves,” Marlene Schiappa, the former equality minister behind the legislation, told the Thomson Reuters Foundation.

“More than 2,000 offences have been identified … thanks to the commitment of the police to protect women and guarantee their freedom to move and come and go as they see fit in public,” the deputy interior minister said.

Other countries with similar laws include Belgium, Peru, Portugal, Argentina, Brazil, Chile and Costa Rica, according to girls’ charity Plan UK, which partnered with Our Streets Now.

The Dutch cities of Rotterdam and Amsterdam have made cat-calling a crime, and an online petition in Germany to outlaw street harassment has drawn more than 65,000 signatures.

But Anais Bourdet, a French feminist, said implementing laws and issuing fines did not address the root cause.

“We are seeking to penalise without asking the question of why. Why do so many men harass women? How can we make sure there are fewer of them?”

Activist Farah Benis, who runs an Instagram account @catcallsofLDN which documents street harassment, said she was uncertain whether British police would take cat-calling reports seriously or be adequately resourced to enforce such a law.

“If a new offence is created it should not happen in a vacuum. Other efforts are needed to address this, starting from the top,” she said. “Police and prosecutors would need to be educated into taking this seriously.”