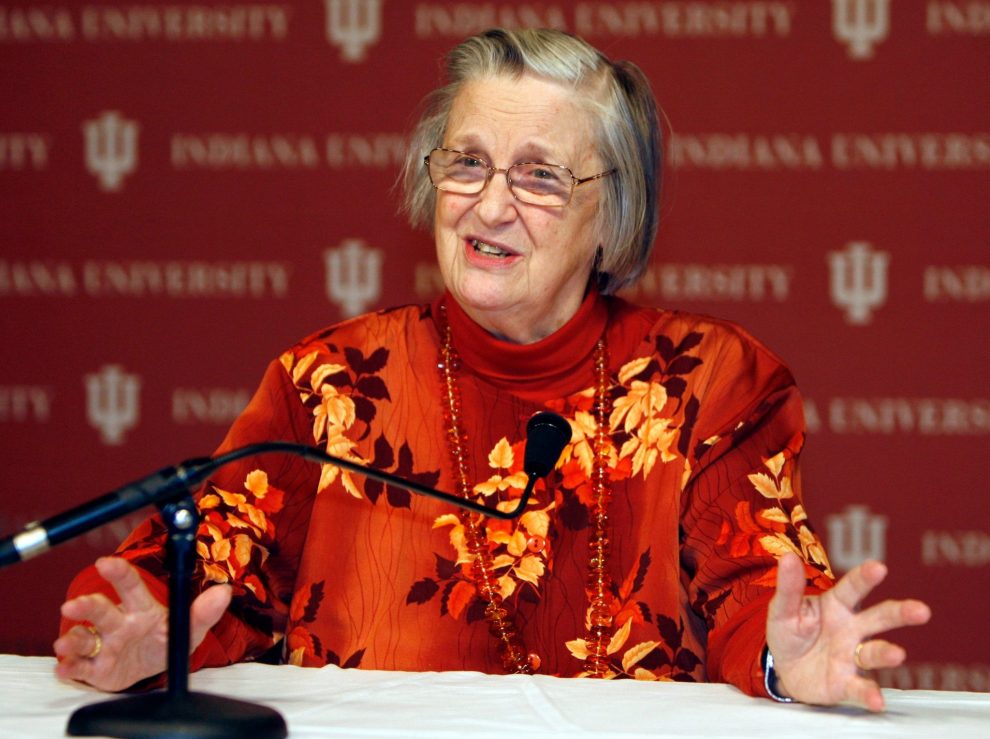 Elinor Ostrom was born in Los Angeles, California, USA. Growing up in a simple family of modest means, she went to the Beverly High School, where even though it was a challenge being ‘a poor kid in a rich school’, the experience gave her a perspective of life for the future. Joining the debating team in the school taught her to think through both sides of an issue. Moving on to college because ‘it was the normal thing to do after high school,’ she got herself a BA in economics in 1954, supporting herself by working variously at the library, a dime store and a bookstore.

Elinor Ostrom has an interesting background. Her Nobel biographical mentions that such were the times that when she started applying for jobs after college, she was quizzed on her shorthand and typing skills, because women were generally expected to be either secretaries or teachers! Apparently, she did go on to acquire shorthand writing, and it stood her in good stead in later life; it wasn’t for taking dictations though! Working first as an export clerk and later as an assistant personnel manager in a small firm gave her the credentials and the confidence to enlist for a Masters and a PhD programme at the University of California, Los Angeles. While she received her MA in political science in 1962, her passage into the PhD programme was not smooth, as she did not have mathematics in her BA, and as a ‘girl’ in those days, she had only a brief acquaintance with algebra and geometry in high school. Apparently, there was deep resistance among the faculty of the university in admitting women to the PhD programme in economics or political science, which were all largely male bastions. However, she finally made it into a batch of forty students (including three women) in the stream of political science. But thereafter, she had a smooth passage. In 1963, midway through her PhD, she became Elinor Ostrom when she married Vincent Ostrom, whom she met when she was assisting him in his research project on the governance of water resources in Southern California. Until then, she was Elinor Claire Awan.

At that time, as a graduate student, she had been engaged to analyse the political and economic impact of a cluster of groundwater basins in Southern California. Here, she got her first introduction to the problem of ‘commons’ when she found the challenges associated with managing a common pool of resources when shared among individuals.

It was while defending her PhD in 1965 that Elinor read Garrett Hardin’s article, ‘Tragedy of Commons’ (briefly explained in the following pages) and Mancur Olson’s book, The Logic of Collective Action, which were just receiving serious attention among political scientists and economists alike. These works would reinforce her interest in the knotty problems of the commons and lay the foundation for her future work.

With her PhD behind her, she went on to work at Indiana University in Bloomington as an assistant professor of political science. She spent the initial fifteen years, while at Indiana University, researching the effectiveness of police services delivery across the United States.

It is only after the fifteen years at Indiana University, around the early 1980s, that she turned her attention back to the problem of the commons which had caught her attention earlier.

The National Research Council had set up a special committee to appraise the empirical research around common-pool resources. While a lot of work on the problem had been done by many researchers, the works were fragmented in terms of ‘discipline, sector and region’. For instance, those studying the tragedy of the commons in fisheries in Africa were unaware of other studies on the same theme in other sectors – say pasture lands – within Africa. If they were economists, they were unaware of the work of sociologists on the same theme and vice versa. If someone was working on a problem in Europe, they were unaware of what was happening in Asia. This fragmentation of knowledge caught her attention as well. Not only were scholars divided by discipline, region and sectors, but they were divided by methodologies as well. Those using the national statistical data were critical of those who used the experimental method or primary data to test their hypotheses.

Elinor Ostrom did not use the methodology adopted by typical economists. Usually, economists started with a hypothesis, an assumed reality, which was then tested. Elinor Ostrom, a political scientist, chose to start with the reality itself. She collected data from the field and then examined this material in depth. She describes in her book, Governing the Commons: The Evolution of Institutions for Collective Action, how common property can be successfully managed by user-associations and how economic analysis can shed light on most forms of social organizations. Her research would have major impact amongst economists and political scientists.

It would be her research dealing with ‘analysis of economic governance, especially the commons’, demonstrating that ‘ordinary people are capable of creating rules and institutions which allow for sustainable and equitable management of shared resources’, which would be singled out for citation in her Nobel in 2009.

Fukuyama’s ‘Liberalism’ is an absolute page turner
“Hymns in Blood”: Translated for the first time into English, Nanak Singh’s book on Partition embodies the spirit of undivided Punjab
Comment