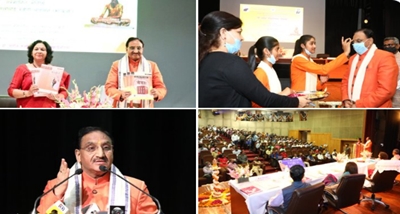 He said, their study materials are available to learners in Sanskrit and Hindi language. They are also being translated into English medium and further all these subjects are also being planned to be prepared in major foreign languages to promote the Indian culture and knowledge tradition abroad.

The Minister said that this course material prepared by NIOS is reflecting the basic spirit of the New Education Policy. He said, the effort that NIOS has already taken to bring Indian culture, heritage, philosophy and ancient knowledge to a new generation with modern references, will prove to be a milestone.

NIOS imparts school education through Open and Distance Education in the field of Secondary, Senior secondary level and vocational training. NIOS has prepared 15 courses of Indian knowledge tradition such as Veda, Yoga, Science, Vocational Skills and Sanskrit language subjects in Sanskrit, Hindi and English medium at all three levels of Open Basic Education Program. These courses are equivalent to classes 3rd, 5th and 8th.